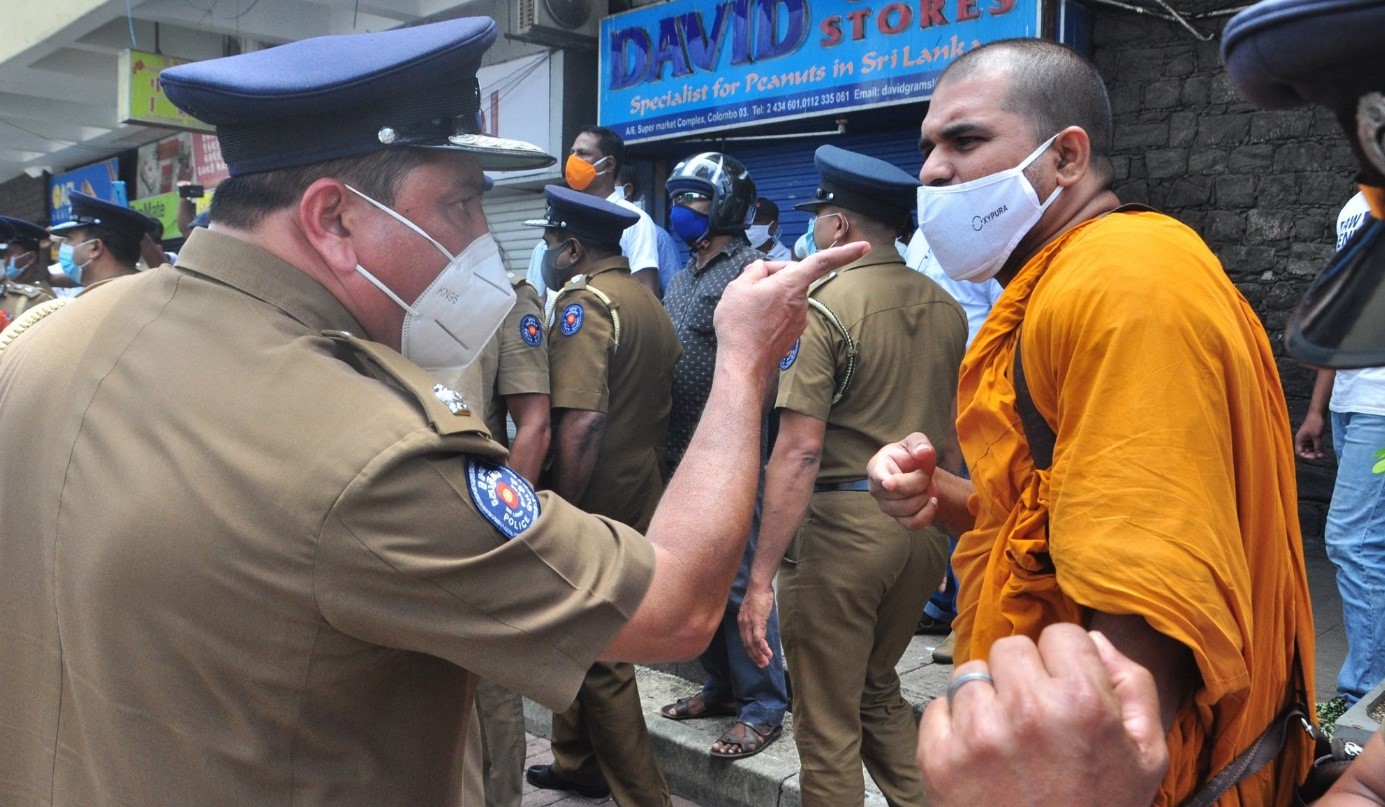 Lawyers, Human Rights Defenders and Journalists Arrested, Threatened, Intimidated 29 July 2020: The Sri Lankan government should end the targeted arrests, intimidation and threats against the lives and physical security of lawyers, activists, human rights defenders and journalists, 10 international human rights organizations said today. A campaign of fear has intensified since the 2019 presidential election, and has cast a shadow over the 2020 parliamentary election campaign.

The United Nations, as well Sri Lanka’s partners and foreign donors, should immediately call for full respect, protection and fulfillment of the human rights of all Sri Lankans, and particularly to halt the reversal of fragile gains in the protection of human rights in recent years.

Numerous civilian institutions, including the NGO Secretariat, have been placed under the control of the Defence Ministry. Serving and retired military officers have been appointed to a slew of  senior government roles previously held by civilians. The authorities have recently established military-led bodies such as the Presidential Task Force to build “a secure country, disciplined, virtuous and lawful society,” which has the power to issue directives to any government official.

This represents an alarming trend towards the militarization of the state. Many of those in government, including the president, defense secretary, and army chief, are accused of war crimes during the internal armed conflict that ended in 2009. Dissident voices and critics of the current government, including lawyers, journalists, human rights defenders and victims of past abuses, are being targeted by the police, intelligence agencies and pro-government media.

Since the presidential election in November 2019, anti-human rights rhetoric intended to restrict the space for civil society has been amplified by senior members of government. On 6 July 2020, at an election rally, Prime Minister Mahinda Rajapaksa stated that “NGOs will be taken into a special attention under the new government formed after the General Election, specifically, how foreign monies and grants are received to the NGOs from foreign countries and further, activities of the international organisations will be observed.” The government has also announced a probe into NGOs registered under the previous government.

In the months following the November 2019 presidential election, a number of organizations reported visits from intelligence officers who sought details of staff, programs and funding, in particular, organizations in the war-affected Northern and Eastern provinces of the country. Such visits are blatant attempts to harass and intimidate Sri Lankan civil society In February, the acting District Secretary in the Mullaitivu District (Northern Province) issued a directive that only non-governmental organizations with at least 70 percent of their activities focused on development would be allowed to work, effectively enabling arbitrary interference with and prevention of a broad range of human rights work. A Jaffna-based think-tank was visited several times, including soon after the Covid-19 lockdown, and questioned about its work, funding and staff details.

Lawyers taking on human rights cases have been targeted through legal and administrative processes and have faced smear campaigns in the media. Kumaravadivel Guruparan, a human rights lawyer, was a senior lecturer at the Faculty of Law at the University of Jaffna. He appeared as counsel on behalf of victims in the case of 24 Tamil youth who were subjected to enforced disappearance while in military custody at Navatkuli in 1996. In November 2019, Guruparan was banned by the University Grants Commission (UGC) from teaching law while also practicing in court. The ban was following a letter sent by the Sri Lankan army to the UGC questioning why Guruparan was permitted to engage in legal practice while being a member of the faculty. Guruparan resigned from the University on 16 July 2020.

On 14 April, Hejaaz Hizbullah, a lawyer who has represented victims of human rights violations, was arrested under the draconian Prevention of Terrorism Act (PTA). He is being held illegally without charge and without being produced before a magistrate for over 90 days.1 He has had limited access to his lawyers and family members. The day before his arrest, Hizbullah joined others in submitting a letter addressed to President Gotabhaya Rajapaksa criticising the denial of burial rights to the Muslim community under Sri Lanka’s Covid-19 regulations.

Achala Senevirathne, a lawyer who represents families in a case involving the enforced disappearance of 11 youth in 2008, in which senior military commanders are implicated, has been attacked on social media, including with threats of physical violence and sexualized abuse. The police have failed to act on her complaints of threats to her safety.

On 10 June, Swastika Arulingam, a lawyer, was arrested when she inquired about the arrests of people conducting a peaceful Black Lives Matter solidarity protest. Other lawyers, not named here for reasons of security, have also been visited at their homes by security officials, or called in for lengthy interrogations linked to their human rights work.

Journalists and those voicing critical opinions on social media, have been arbitrarily arrested. The UN High Commissioner for Human Rights expressed alarm at the clampdown on freedom of expression, including the 1 April announcement by the police that any person criticizing officials engaged in the response to Covid-19 would be arrested. It is unclear whether there is any legal basis for such arrests. The Human Rights Commission of Sri Lanka has cautioned against “an increasing number of such arrests since the issuing of a letter dated 1 April 2020”.

Media rights groups have condemned the targeting of journalists since the presidential election, with threats of arrest, surveillance, and lengthy police interrogations linked to their reporting.

Dharisha Bastians, former editor of the Sunday Observer newspaper and a contributor to the New York Times, her family, and associates, have been persecuted by Sri Lankan police in retaliation for her work. Since December 2019, authorities have attempted to link Bastians to the disputed abduction of a Swiss Embassy employee in Colombo. The government claims the alleged abduction was fabricated to discredit the government. Since Bastians had reported on the incident as a journalist, the police have obtained and published her phone records, searched her house, and
seized her laptop computer.

On 9 April, a social media commentator Ramzy Razeek was arrested under Sri Lanka’s International Covenant on Civil and Political Rights (ICCPR) Act and the Computer Crimes Act. He approached the Sri Lankan police for protection following online death threats linked to his social media posts condemning all forms of extremism. Instead of receiving protection, he was jailed and denied bail. His hearing has been postponed, despite his failing health and the heightened risk posed by the pandemic in prisons.

The targeting and repression of journalists and human rights defenders is not only an assault on the rights of these individuals, but an attack on the principles of human rights and the rule of law which should protect all Sri Lankans. These policies have a chilling effect on the rights to freedom of expression and association, which are crucial for the operation of civil society and fundamental to the advancement of human rights. Those working on ending impunity and ensuring accountability for past crimes, and especially victims, victim’s families, members of minority communities, and networks in the Northern and Eastern provinces, are particularly at risk of intimidation and harassment.

The Sri Lankan authorities must end all forms of harassment, threats, and abuse of legal processes and police powers against lawyers, human rights defenders and journalists. Ramzy Razeek and Hejaaz Hizbullah must be released immediately. Human rights defenders living and working in Sri Lanka should be able to carry out their peaceful human rights work without fear of reprisals, which requires a safe and enabling environment in which they can organize, assemble, receive and share information.

While the government of Sri Lanka continues to deny Sri Lankans the ability to promote and defend human rights, particularly targeting members of civil society, we call upon the international community, including states and the United Nations, to demand that Sri Lanka live up to its international human rights obligations.