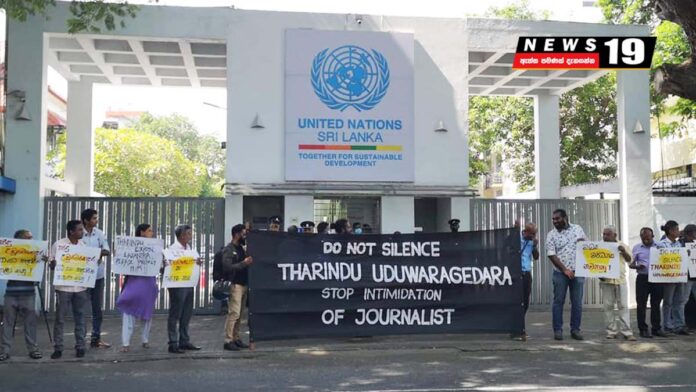 (Frontline Defenders) On 22 June 2022, Sri Lankan journalist, media rights campaigner and human rights defender Tharindu Uduwaragedara was served a notice requiring him to appear at the Criminal Investigation Department (CID) in Colombo for inquiry on 28 June 2022. Tharindu Uduwaragedara was not given clear reasons for the inquiry except that it relates to the content of his YouTube channel, and that a complaint had been made against him by the Intelligence Division of the Sri Lanka Air Force (SLAF).

Tharindu Uduwaragedara is a well known independent journalist and media rights campaigner who has been reporting on the ongoing citizens protests across the country against government corruption, mismanagement and the lack of basic resources including medicines, food and fuel. He is the former president and active member of the Sri Lanka Young Journalist Association (SLYJA) and an Executive Committee member of the Sri Lanka Working Journalists Association (SLWJA). He has worked at several Sinhala language newspapers including Ravaya and Anidda, known for their investigative journalism and open critique of the government. Tharindu Uduwaragedara has his own YouTube channel Satahan Radio, dedicated to independent reporting on social issues and human rights violations.

Tharindu Uduwaragedara has been actively documenting the citizen’s protest since March 2022 and his YouTube channel is a tool to voice the messages of those (mostly youth) who are protesting against scarce resources, governmental corruption and mismanagement. He has been present from the outset at Galle Face, in Colombo, where peaceful protesters have set up a protest site, Gota Go Gama calling for the resignation of President Gotabhaya Rajapaksa. Tharindu Uduwaragedara set up the International Media Center-Colombo tent at Gota Go Gama, to support journalists reporting from the protest site. Tharindu Uduwaragedara has been openly critical of the current government and its policies, lack of transparency and the crackdown and reprisals against peaceful protesters.

Sri Lankan authorities have reacted violently to the protests. Reprisals including physical violence against peaceful protesters, surveillance, intimidation and arrest/detention on baseless charges are ongoing in an attempt to quash legitimate dissent. On 20 June 2022, 9 protesters were arrested by Sri Lanka police in one night alone1. Many others have been called for questioning, arrested and later released on bail. There has been no accountability to date for violence by security forces and government supported mobs against peaceful protesters, most notably on 9 May 2022.#

On 22 June 2022, the CID served summons to Tharindu Uduwaragedara’s mother’s home in Bandarawela, Badulla District, ordering him to appear for an inquiry at the CID headquarters in Colombo on 28 June 2022. The summons contained the name and number of a sub-inspector of the police to be contacted for further information. Tharindu Uduwaragedara telephoned this officer and asked why he was being called for questioning. The officer refused to share details, stating only that the inquiry was related to the content of his YouTube channel and that a complaint had been filed against him by the Intelligence division of the Sri Lankan Air Force. Tharindu Uduwaragedara filed a complaint with the Human Rights Commission of Sri Lanka on 22 June 2022 against this treatment which he believes is linked to his reporting and human rights work.

This is not the first time Tharindu Uduwaragedara faces reprisals for his work. He has been subjected to harassment and surveillance, including during the current protests. Uniformed officers and unidentified individuals suspected to be intelligence officers have routinely visited the Media Center tent and inquired about his whereabouts. Those protesting and reporting are photographed continuously by security and intelligence officers. The recent summons issued to Tharindu Uduwaragedara is part of a pattern of persecution against those raising their voice against the current regime.

Front Line Defenders is concerned regarding the summons issued to Tharindu Uduwaragedara as we believe this is directly linked to his legitimate journalism and peaceful human rights work. All citizens and especially journalists and human rights defenders must be safe from reprisals when carrying out peaceful protests and expressing legitimate dissent against Government policies.