Sri Lanka HRC writes to IGP: Limiting freedom of expression in a democracy needs to strike a lawful balance. 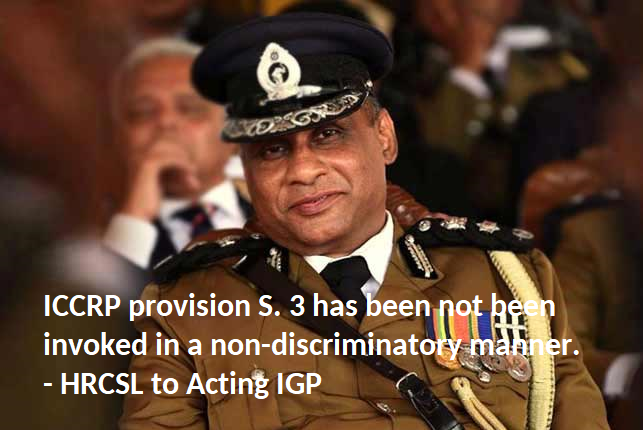 The Human Rights Commission of Sri Lanka observes a spate of recent arrests by the police on the basis of statements made over social media, especially in the context of the spread of Covid 19 virus in the country.

We have observed an increasing number of such arrests since the issuing of a letter dated 1 April, 2020 by the Media Division of the Police Department to heads of media institutions warning of strict legal action against those who publish false and malicious statements over the internet against public authorities who are engaged in containing the spread of the virus. The letter clearly conveys the message that criticism of officials will not be tolerated.

It is the duty of our Commission to point out that any action taken to limit freedom of expression and other such rights in a democracy, even during a period of emergency, must be within the framework of the law. In this instance the applicable law is the Constitution and also Sri Lanka’s international human rights obligations. Those laws require that limitations on rights should comply with the tests of legality, proportionality (limitation must be proportionate to the threat) and non-discrimination. The Supreme Court of Sri Lanka has developed a rich body of authoritative jurisprudence in that regard.
In light of the above, the Commission wishes to bring the following matters to your attention. We do so under powers and functions conferred on the Commission by its parent statute, Act No.21 of 1996:

[title]1) Arrests on the basis of misinformation[/title]

HRCSL recognizes the need to lawfully curb misinformation that can cause panic and pose a serious threat to public order and public health when the entire country is facing an
unprecedented public health crisis. However, such arrests must be legally validmust not be arbitrary and disproportionate and must not be carried out in a discriminatory manner. We observe that the B reports pertaining to above arrests cite several statutes as forming the legal basis of such arrests. They include the Penal Code ( s.120), Computer Crimes Act, No. 24 of 2007 (s.6), Police Ordinance (s.98), Quarantine Ordinance, No. (ss. 4 & 5) and the Disaster Management Act , No. 13 of 2005(s. 24).

We wish to point out that the legal basis of the use of the provisions of the Quarantine Ordinance and the Disaster Management Act is questionable for the following reasons:

Similarly, it is questionable whether s.24 of the Disaster Management Act can be invoked in the absence of a proclamation declaring a state of disaster in the country which is approved by Parliament as required by s.11 of the Act.

One B report does not specify the legal basis of the arrest at all. If misinformation which has a negative impact on public order and public health is to be curbed, there must be a sound legal basis for action taken by law enforcement authorities . Also, a careful differentiation must be made between genuine mistakes, statements made in good faith or the public interest (such as by whistle blowers) and those statements that are intentionally calculated to cause mischief.

We, therefore, recommend that you review the legal bases for recent arrests for misinformation accordingly so that due process requirements are complied with and also ensure that any future arrests are strictly within the law.

The warning issued by the Police Media Division letter to media institutions that legal action would be taken against those who criticize officials is viewed with deep concern by the Commission as it is bound to have a serious chilling effect on people’s freedom of expression. The right to comment on, and indeed criticize, the performance of public officials or of anyone else or any policy is a fundamental aspect of a democratic society. It is through criticism and commentary that we improve governance and strengthen democracy. This principles has been firmly established by a series of authoritative judgments of the Supreme Court of Sri Lanka (vide Joseph Perera v. AG ([1992] 1 Sri L.R. 199; Amaratunga v. Sirimal [1993] 1 Sri L.R. 264).

We wish to, therefore, point out that any arrest for the mere criticism of public officials or policies would be unconstitutional.

HRCSL recognizes the urgent need to quell hate speech through the law in order to preserve peaceful co-existence among diverse communities. Most recently we wrote to you by letter dated 3 April, 2020, urging you to take action under s. 3 of the ICCPR Act against those who were attempting to incite religious division and hatred in the context of the current health crisis.

Previously, our communication dated 28 August, 2019 addressed to you conveyed HRCSL guidelines on the application of the above provision. We pointed out that where there is reasonable evidence that a person has engaged in (a) advocacy of national, racial or religious hatred and (b) with an accompanying intention to thereby cause violence, discrimination or hostility, law enforcement authorities are duty bound to take action.

At the same time we wish to point out that it is essential to ensure that s. 3 is invoked in a nondiscriminatory manner providing protection to all communities. If not, the law becomes a weapon against certain communities and defeats the very purpose for which it was enacted by Parliament. Our observations on arrests made thus far under the above provision do not make It possible for us to come to a reasonable conclusion that the provision has been invoked in a non-discriminatory manner.

The Human Rights Commission of Sri Lanka once again reiterates its deep appreciation of the role played by the Police Department in support of public health authorities during this unprecedented health crisis. However, it is incumbent on our Commission to point out the human rights implications of problematic measures taken by the Police Department. We offer our observations and recommendations per our Commission’s mandate with the sole intention of ensuring executive and administrative compliance with human rights law. We urge you to review action discussed above and take necessary measures to ensure compliance.

HRCSL takes this opportunity to emphasize the need for Sri Lanka to emerge from these difficult times with a stronger belief in constitutional governance and the Rule of Law. Ad hoc solutions found outside the law are bound to leave a very negative legacy on democratic governance in the long run. Both our Constitution and our international human rights obligations permit adoption of extraordinary measures during emergencies without compromising human rights protection or the Rule of Law. Our country’s strength surely would be to follow that path.