Sri Lanka: How to read the local government election results 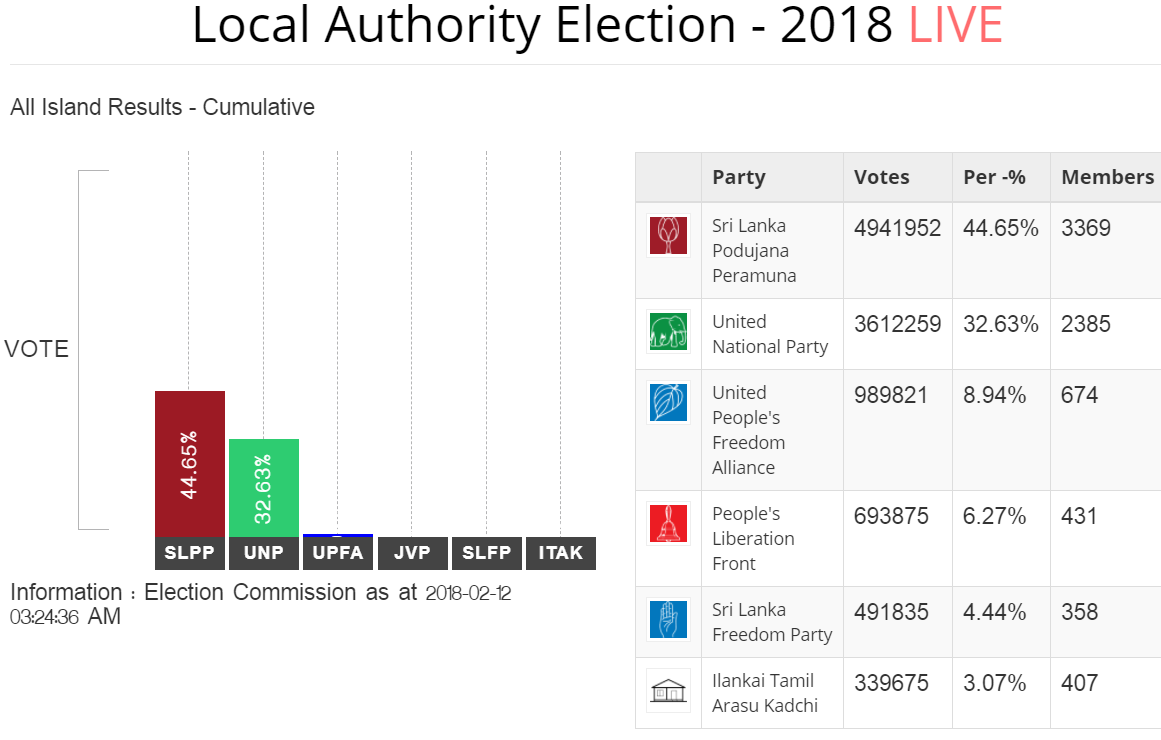 The perception is that former President Rajapaksa’s SLPP won a great victory; that the UNP did not do as well as expected and President Sirisena’s attempt to consolidate his position in the SLFP has failed. President Sirisena’s decision to lead the SLFP’s campaign in elections for the lowest level of government has diminished the power of the presidency for the remainder of his term.

In mature polities, it is common for different parties to win elections at different levels of government. In Canada, it is almost routine for political parties in the opposition at the federal level to control the provincial governments. But the norm in Sri Lanka is for one party to dominate all levels. One hopes that the ‘winner takes all’ mindset will begin to fade with this election.

This election was the first road test of a new and complex electoral system described technically as a Mixed Member Proportional System (MMP). It is 100% proportional. The number of seats is directly proportional to the number of votes received.

That means that the really significant number is what percentage of votes was won by a party in a local government body. If that percentage is less than 50, the winning party will have to enter into an alliance with another party in order to govern. How many of the wards it won on the first-past-the-post (FTTP) method is irrelevant to that. A party may have won all or most of the FTTP seats (generally, 60% of the total), but unless it has won more than 50% of the total votes cast, it is not an unequivocal victory. Contrary to claims of a sweep, the next few weeks will see intense negotiations as alliances are formed in a majority of local government units.

Matters get more complicated when the overhangs and women’s representation requirements are factored in. If a party’s FTTP winners are more than the number of seats it is entitled to under the proportional system, complications arise. If not enough women got elected FTTP, it may be difficult to meet the 25% representation requirement, and so on. The Government, the Elections Commission and citizens must treat this election as a trial run of MMP. The actual operation of MMP in Sri Lankan conditions must be analysed and the required changes incorporated in the procedures for the provincial and national elections that have to be held soon.

One obvious change that the Elections Commission must implement is in the manner of reporting results. Because FTTP wins do not represent the actual distribution of seats, care should be exercised in reporting FTTP winners. Ideally the first result that should be reported is the percentage of votes won by each party. The FTTP winners should only be announced subsequently. Claims of wins or sweeps based on FTTP alone are highly misleading. Those who come second or even third in FTTP contests are likely to end up as full voting members of the municipality or pradeshiya sabha.

The claim made by senior parliamentarian Dinesh Gunawardena that this election result overrides the mandate given to the Common Candidate on 8 January 2015 is silly. How can the votes cast in an election for the lowest level of government have a bearing on a presidential mandate?

Even if it were conceded that it was a proxy contest (because both the winner and loser of the 2015 election made it so), the argument fails. The Common Candidate won 51.28% of the votes cast. Even though the final authoritative numbers are not yet in, it is highly unlikely that the SLPP is going to exceed that percentage countrywide. So the argument that 45% (or whatever the final number is) in 2018 trumps a six-year mandate given by 51.28% of the electorate in 2015 fails.

President Sirisena was elected for one term as the common candidate in order to advance good governance. He should reflect on the nature of his mandate, the people who voted for him in 2015, and the promises he made in order to win their votes. Even if weakened by this election he still can deliver on those promises.

He can, for example, take credit for this very election, which had historically low levels of violence and abuse of public resources, as a promise that has been partially delivered (provincial and national changes are yet to be made).

Here is what he promised: “The existing electoral system is a mainspring of corruption and violence. Candidates have to spend a colossal sum of money due to the preferential system. I will change this completely. I guarantee the abolition of the preferential system and will ensure that every electorate will have a Member of Parliament of its own. The new electoral system will be a combination of the first-past-the-post system and the proportional representation of defeated candidates. Since the total composition of Parliament would not change by this proposal, I would be able to get the agreement of all political parties represented in Parliament for the change. Further, wastage and clashes could be minimised since electoral campaigns would be limited to single electorates.”

He can take credit for reducing the presidential powers through the 19th Amendment and for enhancing citizens’ ability to supervise the actions of their elected representatives and officials through the Right to Information Act. He should desist from second-guessing his Ministers on all sorts of mundane matters and instead focus on the big picture by entering into performance contracts with all the ministers and holding them accountable. It is actions such as these that should mark his contribution to this country, not whether he regained control of a political party or not.
FT