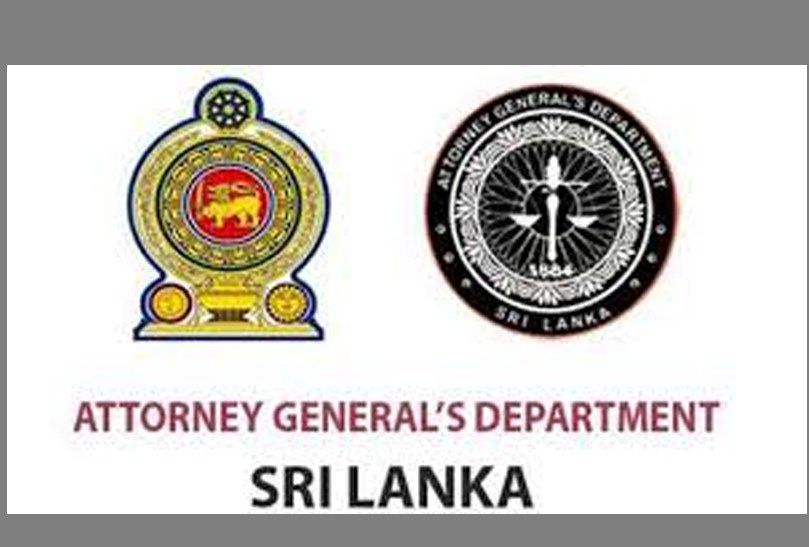 Certain acts by the Attorney General’s Department and the Public Service Commission during the past few months to promote certain officers of the department bypassing the Scheme of Recruitment has given rise to grave concerns of conflict of interest.

Question raises as to why Attorney General (AG) Sanjaya Rajaratnam PC made a request to the Department of Management Services within two weeks of his appointment to increase the number of  Deputy Solicitor General (DSG) cadre by a further nine posts.

Sanjaya Rajaratnam was appointed as the AG on May 28, 2021. The alleged reason to request permission to increase nine and not one more DSG is to accommodate Kanishka de Silva Balapatabendi , the daughter-in-law of the Chairman of the Public Service Commission (PSC) former Supreme Court Justice Jagath Balapataeandi – a well known figure and also as the former Chairman of the Bribery Commission. 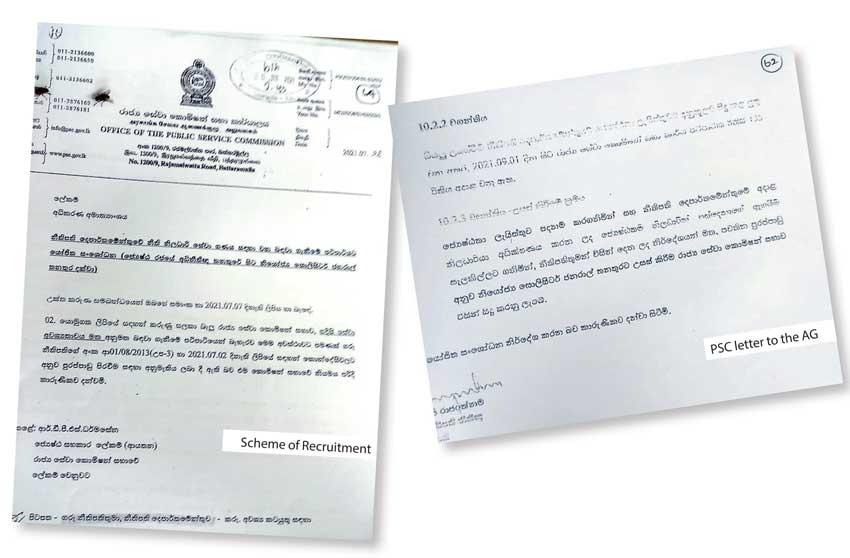 Having obtained the approval from the Department of Management Services (DMS) to increase the DSG cadre, the AG by letter dated July 2, 2021, wrote to the Secretary Public Service Commission through the Secretary to the Ministry of Justice stating that there is a necessity to amend the Scheme of Recruitment (SOR) due to an urgency to fill Deputy Solicitor General vacancies. 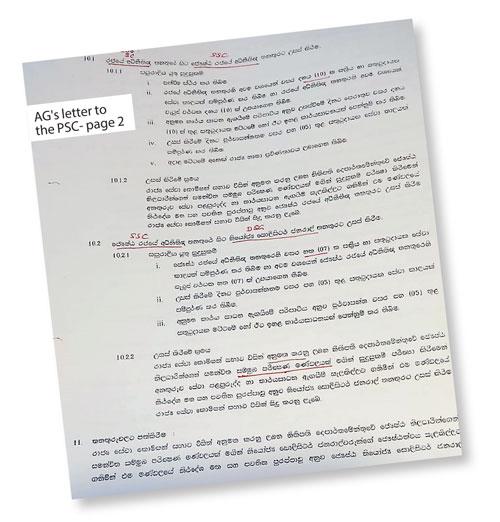 This newspaper is in possession of this letter. It further states, ‘There is an urgency to fill the newly approved Deputy Solicitor General’s Posts (as per Management Services Department approval Ref. No: DMS/ 1007/ VOL IV, letter dated June 10, 2021) and need to amend the Scheme of Recruitment (SOR) as given below –
As per the existing SOR clause 10.2.2, applicants to the post of DSG should have completed seven (7) years’ service experience in the post of Senior State Counsel (SSC) with satisfactory performance.

But however, Rajaratnam has recommended the PSC to amend the said clause as –
1.Should have provided satisfactory service in the post of SSC and
2.Should not have been subjected to any disciplinary action as per the PSC circular No: 01/2020.

“What was the reason for the AG to request the Department of Management Services to increase the number of DSG’s by 9?  Why did he ask to increase this by an odd number – nine instead of an even one additional number- ten? Why did he want the PSC to remove the minimum 7 years of experience in the post of SSC to become a DSG?” Why did he not increase the number of Senior DSG cadre and jump straight to the DSG cadre? What was the sudden urgency in the midst of the pandemic to increase the cadre? are questions that warrants reasoned answers, especially in the light of the bare wording of ‘urgent exigencies of service’ ” sources claimed firmly.

According to the sources, the reason behind Sanjaya Rajaratnam’s requests is a clear indication as to how he needs to promote Kanishka de Silva Balapatabendi to the post of DSG as she only possesses 4 years’ experience in the post of SSC which otherwise requires 7 years.  Had Rajaratnam not requested any amendments to the SOR and filled the vacant posts (with the increased cadre), the last person eligible to be promoted would have been Senior State Counsel Ganga Wakistarachchi, as those who are in that batch have fulfilled the requirements in clause 10.2.2. They have seven years’ service experience as SSCs,” the sources added. 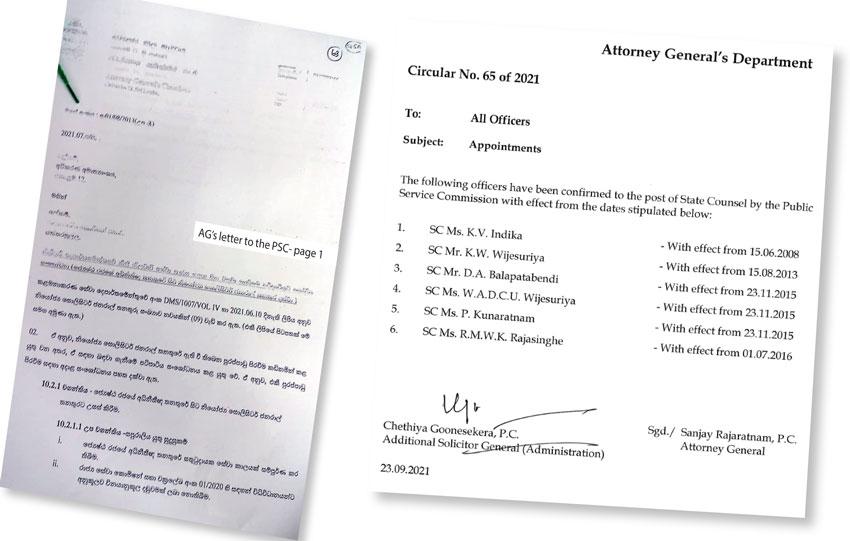 Although Rajaratnam had only requested the PSC to amend clause 10.2.2 of the SOR, by removing the number of years required to become a DSG, the PSC by letter dated July 28, 2021, to the Secretary Ministry of Justice and with a copy to the Attorney General has given even a better option than Sanjaya Rajaratnam’s request by approving a special dispensation stating that the SOR will not apply to this round of promotions in view of exigencies of service, which letter is in possession of this newspaper.

“Although the AG has never stated that there is a service exigency, in the midst of the pandemic and at a time the courts are not functioning and even the work of the present officers is minimal, what was the reason for the PSC members headed by Balapatabendi to assume that there is a service exigency? Was this so-called exigency to promote the Head of PSC’s daughter-in-law?  There is no urgency to fill the SDG vacancies to handle the Department work. Even the SSCs are trained to handle cases. When senior officers go on retirement or resign, there are occasions that junior officers are assigned to handle the cases. Apart from high-profile cases, we are told that State Counsel should be ready to handle any case on short notice. Even the Judges often say that junior officers should be able to argue the senior’s case. In one such case a few days ago Kanishka De Silva Balapatabendi was required to do a case handled by Additional Solicitor General Parinda Ranasinghe”, sources claimed.

In effect those who are in Kanishka de Silva Balapatabendi’s batch will not be able to apply for the next promotion for another 3 years as the PSC through letter dated 28th July 2021 has exempted only this round of promotions. Therefore for the officers of the same batch, this promotion will have a ripple effect throughout their career as a result of the said letter dated 28th July 2021 – a clear violation of the Rule of Law.

Controversy also surrounds how the cadre of the Additional Solicitor General’s (ASG’s) too had been hurriedly amended to increase Additional Solicitors-General (ASG’s) from 9 to 14. Because of this increase in the ASG cadre, there are now more members in a higher rank (ASG) than a lower rank (SDSG) and thus the pyramid structure necessary to balance the organization has been destroyed” sources added.

Meanwhile, it is also learnt how the PSC has given permission to the AG’s Department to confirm six junior officers as State Counsels (SC) with backdated letters. One of the six appointees was D.A. Balapatabendi, son of Justice Jagath Balapatabendi. This newspaper is in possession of Circular No: 65 of 2021 that shows how Balapatabendi was promoted as a SC on September 23, 2021, with effect from November 23, 2015.

Meanwhile, the sources further accused PSC Chairman, Justice Jagath Balapatabendi of exonerating a Senior Officer at the AG’s Department who has 65 charges against her for destroying more than 200 files of civil cases.

“This female officer wanted to go abroad but she was asked to clear all the cases to grant leave. She got two minor staffers and burnt few bundles of files and when she tried to burn the rest, one of these minor staffers had informed the senior officers. There was an inquiry against this officer and she was found guilty. The officers that inquired this were the then Senior Deputy Solicitor General Sobhitha Rajakaruna and the then two Additional Solicitor General’s Yasantha Kodagoda and Priyantha Navana. But however, when Balapatabendi took over the PSC, he exonerated her although there are ample proofs to prove that she destroyed bundles of files and attempted to destroy the rest,” sources claimed.

The sources said this is a classic case of quid pro quo. You scratch my back and I scratch yours.

As citizens, our hopes of justice diminishes when the highest law officer in the country, the Hon. Attorney General resorts to legalize things in a roundabout way right at his door and the Public Service Commission, the apex authority handling appointments, transfers, promotions and disciplinary conduct of all the public officers in the country to act in this manner. How can such people in authority dispense justice when they demonstrate with clear signs that law is only for the poor and weak.