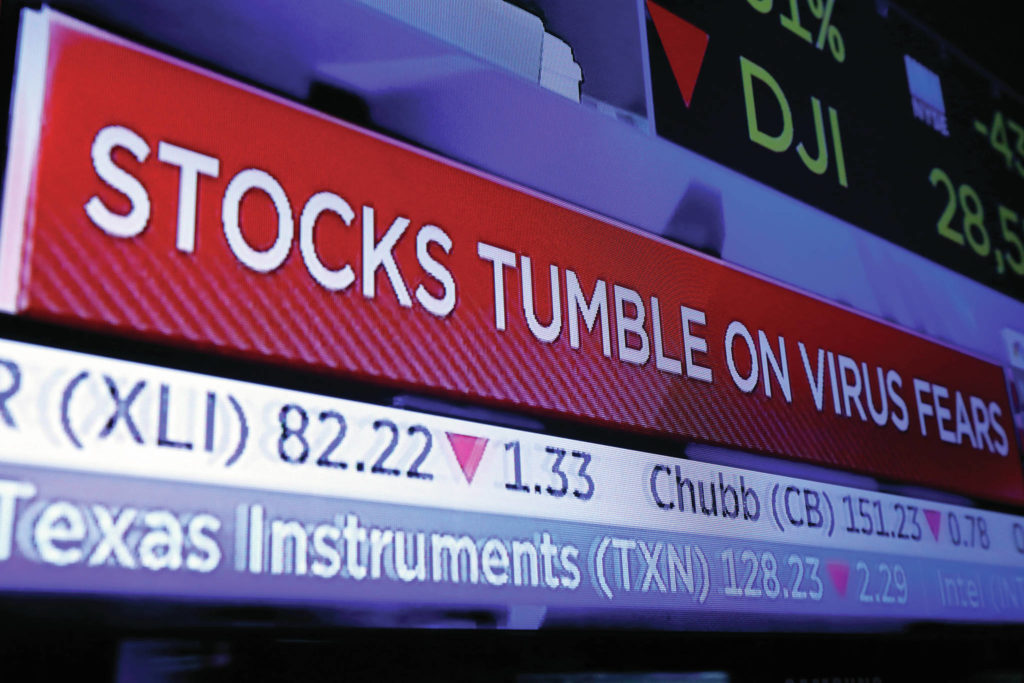 The corona pandemic is spreading like wildfire. Its economic consequences are severe, increasing and unpredictable. It is worse than a recession. It is a global economic shutdown and will impact severely on the Sri Lankan economy.

It has spread to more than 170 countries with over 270,000 persons tested positive. Its international ramifications are widespread, extensive and wide-ranging. Its duration is still uncertain and there is little prospect of an early containment of the pandemic and a revival of the international economy. Even if a vaccine is developed soon, it would take about a year for its effective use worldwide. Meanwhile, the measures taken by governments would slacken economic activities and depress economies.

The world economy is now heading towards an economic paralysis. The coronavirus that is spreading to all parts of the world poses a far more serious threat to the world economy than was expected a month ago. It is more than a recession. It is virtually a global economic shutdown.

Economic activities are at a standstill: Travel is seriously curtailed; schools, universities and work places are closed down; hotels and restaurants are closing; supply of raw materials and supply chains are disrupted. Employment, incomes and livelihoods the world over are seriously threatened.

The decreased demand for oil has resulted in a precipitous fall in prices for oil and lower incomes for oil-exporting countries. This, in turn, will confer some benefits to oil importing countries, while decreasing their demand for their goods and services.

The global economic disruption will affect Sri Lanka’s import-export economy in many ways. The adverse consequences on the trade balance and the balance of payments is the most serious impact on the Sri Lankan economy.

Export earnings are likely to decrease, earnings from tourism will fall sharply and workers’ remittances would decrease. These would lead to a large balance of payments deficit that would make the repayment of foreign debt obligations more burdensome, especially if there is a high premium on interest rates for the country.

Exports will decrease owing to the depressed international demand and the disruption in supply of raw materials that would reduce production and exports. A sharp fall in exports would increase the trade deficit significantly.

The most serious setback to the balance of payments and the economy would come from tourism that has been seeking a revival after the Easter Sunday terror attacks last year. The continued threats to international travel owing to COVID-19 make such a revival unlikely.

Tourist earnings that fell by 18 percent from US$ 4.4 billion in 2018 to US$ 3.6 billion last year will decrease further this year owing to the curtailment of travel from the main countries from where Sri Lanka gets most of its tourists. There would be a massive decrease of Chinese tourists: the second largest travellers to Sri Lanka, accounting for about 10 percent of the Island’s tourists.

Tourists from Western countries, too, would be minimal as they are affected by the pandemic and there is a travel ban and visa restrictions. Middle Eastern travellers would also drop owing to fears of COVID-19, as well as depressed oil incomes.

Workers’ remittances that fell last year by US$ 300 million are likely to shrink further because of fears of travel by Sri Lankan workers and the enforcement of travel restrictions to countries like South Korea, Italy and Iran. Furthermore, the lesser incomes in West Asia owing to the decreased prices for oil would reduce remittances.

Workers’ remittances are likely to fall from US$ 6.7 billion last year to US $ 3.5 billion this year. This fall will create a huge balance of payments problem.

The reduction in exports, earnings from tourism and workers’ remittance could lead to a large balance of payments deficit. This would weaken the country’s foreign reserves and make the repayment of foreign debt obligations that are already difficult more onerous. This would be especially so if there is a high premium on interest rates for the country’s international borrowing.

There are a few developments that could relieve the balance of payments. The most important of these is the precipitous fall in international oil prices that fell to one of the lowest in recent times. At the time of writing they were around US$ 30 per barrel.

On average the annual fuel import bill absorbs between 15 to 20 percent of the total import bill. Therefore the fall in prices will reduce the import bill significantly. However we must be conscious of the possibility of a reversal in international oil prices. The precipitous fall in oil prices was owing to the huge fall in demand for oil due to the low level of economic activity, especially international air travel. While this is not likely to change quickly, there is the prospect of OPEC and other oil producing countries curtailing output to enhance prices.

Furthermore, the lower incomes of oil-exporting countries could depress the demand for tea, migrant employment abroad and tourist earnings.

A large number of workers in the hospitality trade and economic activities linked to tourism will be unemployed and will lose their incomes. Similarly, much of the remittances go to poor rural households. The dip in remittances is a definite loss of income to low income and poor households. While the country’s economic growth will dip downward, the incomes of low income households are seriously undermined.

Sri Lanka’s exports are facing an inhospitable world market as a consequence of the world wide coronavirus pandemic. The demand for Sri Lanka’s industrial exports and tea is likely to fall owing to depressed demand and disruption of marketing.

The country’s manufactures would be also affected owing to unavailability of raw materials, disruption of international supply chains and depressed demand. The sharp contraction in international travel and tourism is affecting tourism severely and tourist earnings would drop sharply.

The only silver lining among these dark economic clouds is the fall in fuel prices that would ease the trade deficit. However, even this would impact adversely on tea exports and workers’ remittances. A reversal in oil prices would wipe away this benefit.