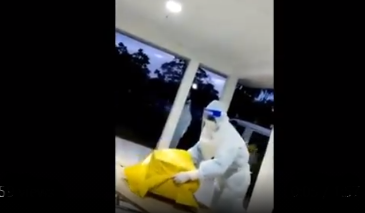 Image: Screenshot of a video of Baby Mohammed being prepared for the forced cremation.

This is the story of the of two-month old Baby Mohammed – the infant whose body was forcibly cremated in Weligama. Baby Mohamed was born on the day of Milad-un-Nabi (birthday of Holy Prophet Muhammad pbuh) on Oct 30th and hence was named after the Prophet.

The story was made public in a series of tweets by Ali Sahi Maulana.

Niyas said that Baby Mohammed was his second child, born after nine years. His wife, Shihana is a diabetic and has high blood pressure, and had a difficult pregnancy.

Since birth, Baby Mohamed had heart & respiratory complications and was undergoing treatment over the last two months at Lady Ridgeway Hospital in Colombo & Karapitiya Hospital in Galle, and all reports of his hospital visits are available.

At the same time, Shihana, Mohamed’s mother, was admitted at Matara Hospital on Dec 25th due to high sugar and blood pressure, where she was assisted by an attendant Niyas hired from Matara to be with his wife, while he tended to Baby Mohammed at home.
Almost immediately after Shihana was discharged from hospital, they received word that the attendant had tested positive for Covid owing to her caring for many patients at various hospitals. Shihana was told to report back to Matara hospital for quarantine.

After Shihana went back to the hospital, they were told that she was Covid positive, although they have not seen the report. Niyas underwent a PCR test privately as well and tested negative so he remained at home with his children under quarantine.

On Wednesday (13) evening, Baby Mohammed was exhibiting signs of constipation so Niyas chose to take the baby to Walana hospital in Weligama on Thursday (14) morning. The baby was transferred by ambulance to Matara hospital and Niyas was told to remain at home in quarantine.

Around 2 pm, Niyas was informed by phone that his baby had passed away. No reference to COVID was conveyed. He asked his relatives in Matara to go to the hospital as he was under quarantine.

His relatives reported back from the hospital saying that the hospital had conducted a PCR test on the body and the baby was negative, but the hospital was sending the test to the Karapitiya hospital in Galle for verification.

A few hours later, his relatives reported back stating that the PCR test that was sent to Galle is positive. They had asked the hospital authorities to do another PCR on the body to confirm, to which the authorities assured that another test will be carried out shortly.
Around 4:30 pm, without any communication or notice to Niyas, Shihana, nor the relatives gathered outside of the hospital, Baby Mohammed’s body was wheeled into an ambulance at Matara hospital.

The relatives by chance happened to notice them loading the infant’s body into the ambulance and followed the ambulance to the crematorium.

At the crematorium, despite pleas by the relatives that they were assured by the hospital to do another PCR test, & that no communication nor consent had been sought for cremation of the baby’s body by the family, officials present proceeded to ready the body for cremation.

The relatives present chose to dejectedly abandon their desperate pleas to halt the process and hurriedly conducted the funeral “Janaza” prayer at the crematorium to afford innocent Baby Mohammed a semblance of final rites in accordance to the Muslim faith.

He is confused on why the hospital had given them hope and assurance that they will conduct another PCR, but chose to dispose the body instead.

Moreover, he is grief-struck on why they would do so without even informing him that they were to cremate his infant son, in rejection of his faith and belief.

(Compiled from serious of tweets by Ali Zahir Moulana @alizmoulana)