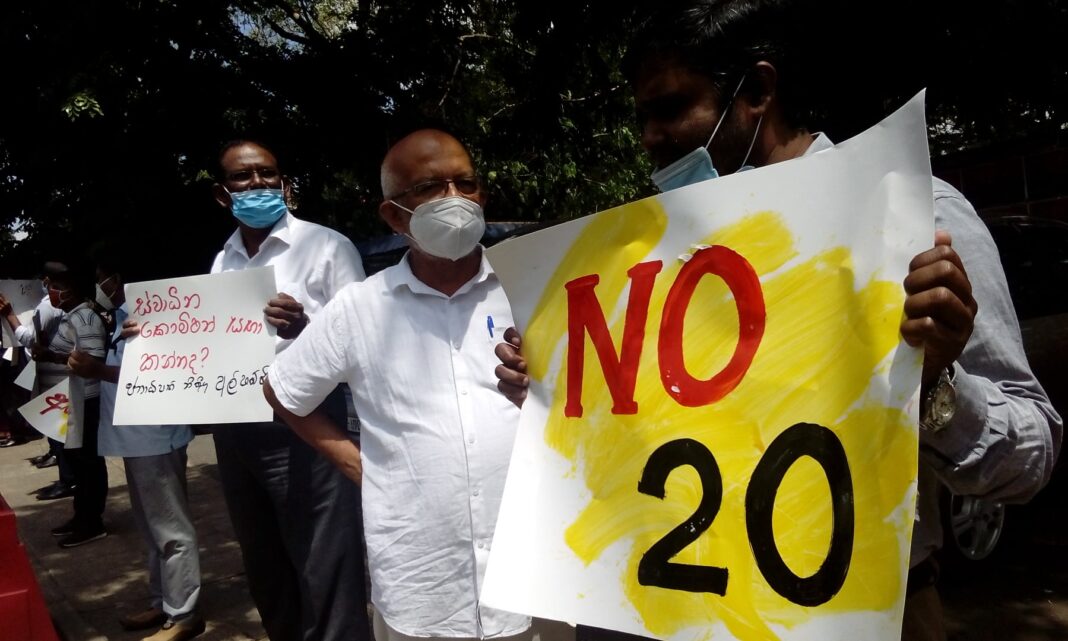 At present, our country is facing a number of serious issues. No person who loves the country can ignore it. That is why the National Movement for Social Justice (NMSJ) stands with the people of the country whenever disaster strikes. It is not an expression against any party, leadership or group. It is a representation of the whole people of the country.

There are a number of such challenges facing the country and bring them to the attention of the relevant authorities.

There were a number of conversations that took place in the society, especially based on the report of the Presidential Commission appointed to investigate the Easter attacks.  We urge all parties to ensure that under no circumstances should any attempt be made to cause any divisions in this country between races or religions as well as politically.

We mention this because we have heard a number of statements from various quarters that could lead to ethnic, religious and political divisions. As it has happened on many occasions in the past, no one should be allowed to set this country on fire or turn it into a lake of blood.

What we need to say most clearly about the Easter attack is that it was a vicious terrorist act carried out with the utmost malice. Of course, all individuals, including the groups involved, must be brought to justice and given the maximum possible punishment. There should be no debate about that. But all parties who are interested and advocating for it should act accordingly. Such activities should be carried out only for the benefit of the nation, beyond narrow national or religious boundaries. No race or religious group should be affected by it. Justice must be done to all the victims of that barbaric attack.

As a nation, we must ensure that national security is ensured in the most scientific and appropriate manner and that this does not happen in the future.

We would also like to draw your attention to a very important issue related to the health of the people of this country. That is, some of the suspicions that have been raised about the vaccination process currently underway against the Covid pandemic.

Sri Lanka has received about 1,264,000 doses of Covid vaccines in the recent past, according to health trade unions. It is reported that about 960,000 doses have been given out so far. If that is the case, then there should be around 300,000 vaccinations left in the country. In order to give the second dose of the vaccine to those who have already been vaccinated in a timely manner, we have to fulfill nearly another 700,000 doses.

Accordingly, the question that arises is what is the government’s plan to give the second dose in a timely manner to our citizens who have received the first dose of the relevant vaccine.

The relevant authorities have to give a very clear and definite answer to the country in this regard. According to media reports, some government officials have stated that the company that manufactures the vaccine has already refused to supply it to Sri Lanka. Accordingly, it is very likely that we will not receive the stock of vaccines that Sri Lanka has already ordered. So what is the course of action we as a country take? What will happen if our country does not receive the stock of vaccines? Does the government have an understanding of that?

According to medical experts, according to the type of vaccine given to the people of our country, the second dose should be given on time in order to be effective. Under no circumstances can any other type of vaccine be substituted for it. And doing so can be very dangerous. As has already been reported, the first dose of the vaccine has already been given to about 960,000 people in our country and the second dose must be given within a few weeks. Otherwise, they will not develop the proper immunity. This means that they are more exposed to Covid. Otherwise the vaccine obtained will have no effect. How does the government deal with this situation? It is the responsibility of the relevant authorities to explain it to the country. We are awaiting their explanation.

State machinery under one person

Today, many institutions related to the state machinery can be seen to be inactive. The entire power of the country is under the authority of one person. As a result, no institution has been able to function independently without the directives and instructions of that person’s authority, and on the other hand, some institutions have become inactive due to his incorrect instructions and guidance. In fact, every institution in this country today has become mere puppets. It is not only the democracy of the country that is being destroyed.

The whole diplomacy has become a web of chaos. This country has been plunged into such a situation by the distortion created in the country by the 20th Amendment.

Therefore, in order to reactivate the state machinery in this country properly, it is necessary to re-create the necessary environment in which the statutory powers vested in each institution can be exercised independently without waiting for orders and recommendations from one person on each issue. For that, the 20th Amendment to the Constitution must be repealed.

What are they using the immense power gained by the 20th Amendment today? In order to suppress their political opponents, to weaken the capabilities of the democratic institutions of the country and to weaken the confidence of the people of this country in the judiciary day by day, certain activities that were active in those powers have been caused.
So its creators need to understand one thing very clearly.

That is to say, if this situation continues to develop in this way, the curse of the people will inevitably fall on them. Moreover, the future generation of this country may not even forgive their children who will be living in this country at that time. We emphasize these points to prevent such a situation from occurring. Because we consider it our absolute responsibility to liberate this country from the great abyss that this country is in today.

This unfavorable situation in the country is creating a very bad situation for the scholars and intellectuals in this country. The most recent example of this is the removal of LakKumar Fernando, a renowned specialist doctor, from his post as the Director of the National Drug Regulatory Authority.

According to one of the leading English language newspapers in the country, the reason for his removal was that he had correctly defended the people against the views of the government in a matter that could endanger the people of this country. What is the message of such incidents to the country? Today, even a specialist doctor is unable to defend the dignity of his profession. This is a very tragic situation. It should be noted here that in the past, several eminent medical professionals have lost their posts and been forced to resign. People do not approve of such things at all. If the authorities in this country do not understand that, it is their misfortune too.

Quality of our food

At the same time, the quality of our food today is at an all-time low. That situation is really troubling. Today the people of this country are helpless to the point where they cannot make even a few sweets without toxic poison for the New Year.

What if the Standards Institute, which certifies the quality of Sri Lankan food and other products itself admits that? This is a very tragic situation and the government should conduct a formal inquiry as soon as possible. This will ensure a non-toxic environment for the food consumed by the people of this country as soon as possible.

Excerpts from the remarks by Karu Jayasuriya, Chairman of the National Movement for Social Justice at the media conference held at Janaki Hotel, Colombo on 08.04.2021