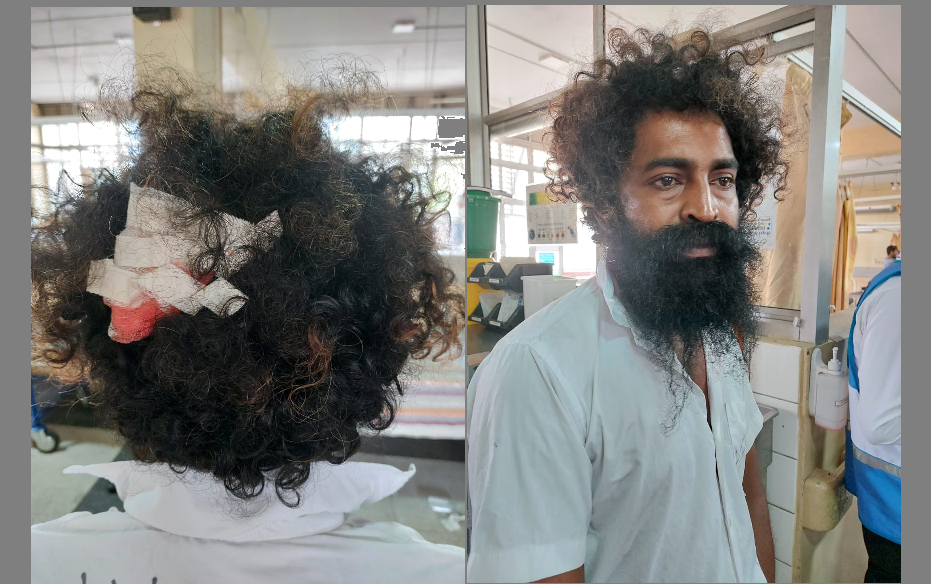 Image: Military and police launch a brutal assault of peaceful protestors on 22 July 2022.
Kishali Pinto Jayawardene.
President Ranil Wickremesinghe’s nonchalant claim that the law operates equitably in Sri Lanka (‘the law is the same for you, me and everyone’) in a carefully calibrated address at the ceremonial opening of the ninth session of Parliament this week, bears an uncanny resemblance to what his Presidential predecessor Gotabaya Rajapaksa had been fond of saying.

Absurd assertions on the law

That Rajapaksa mantra was taken to the extreme point of deputizing a Buddhist priest, known for  inciting communal hatreds, to head a task force to bring about, ‘one country, one law.’ This was yet another of the many profound absurdities that we saw, along with the banning of chemical fertiliser, the placing of inept military men into key public sector positions and allowing an incompetent band of charlatans to drive the country into bankruptcy.

Wednesday’s assertion by the United National Party’s leader, who was handed the Presidency on a plate as it were, is no less absurd. Why are Sri Lankan Presidents so fond of claiming equity in the operation of the law when the contrary is so plain that a child can see it? An example close at hand is the starkly differential treatment meted out to two prominent trade unionists, both of whom participated in civic protests.  One, a politically compromised (close to the United National Party) trade union leader (Saman Ratnapriya) was conferred the grand post of Director General, Trade Unions under Wickremesinghe’s aegis.

The other, a longstanding campaigner for workers’ rights and Secretary of the Sri Lanka Teachers Union, (Joseph Stalin) was summarily arrested. Both were involved in substantially the same act, standing alongside each other in protest marches on May 28th 2022, as they called for ‘Gota to Go.’ That, by itself, is not a crime, an offence causing damage to public property or illegal entry to state buildings. But one is ‘rewarded’ and the other is ‘punished.’ From whence comes this distinction, this very specific  differentiation sans logical classification?

Politicians who provoked the May 9th attacks walk free

The Government seems oblivious of the warning that peaceful protest has been held by the Supreme Court to be part of the constitutional rights of citizens, umpteen times. Or more probably, it simply does not care. That lack of understanding or concern as the case may be, percolates to the highest state office in the land. Now that ‘Gota’ has gone, a different President professes to comprehend the meaning of freedom of association and expression. Indeed, he promises a tad condescendingly to ‘reserve’ separate venues for the ‘aragalaya’ (peoples’ struggle).

Two Ministers who provoked the May 9th attacks on ‘GotaGoGama’ protestors still walk free and unscathed.

But his actions are far worse than his befuddled predecessor in the Office of the President. To give the new President (doubtful) credit, there is no confusion about his actions however much that may belie his words. That was very clear in what he said to Parliament, vide, ‘…if there are individuals who intentionally violate the law and engage in violent and terrorist acts, legal action will be taken against them. I will not allow anyone to act outside the law.’

“Why are Colombo’s civil society activists, apt to vociferously agitate on every little sin of the Rajapaksas, not more appalled by this?”

Even so, obvious contradictions emerge, quite apart from the law operating differently against ‘ill-favored’ trade unionists. Despite President Wickremesinghe saying in the same breath that, ‘the law will be applied equally to the people who attacked the peaceful protesters on 9 May and those who are engaging in violence and terrorism under the guise of the struggle,’ the contrary is evidenced. Two Ministers who provoked the May 9th attacks on ‘GotaGoGama’ protestors still walk free and unscathed.

What has happened to high-flying rhetoric on civil liberties?

Former Prime Minister (Mahinda Rajapaksa) who gave his stamp of approval to the attacks remains untouched. So on what basis does President Wickremesinghe make these assertions, it does not suffice to say that the police and the judiciary decide on such matters? Why are protestors being hauled away even if they have not been involved in violence? Why was Stalin and others like him, including journalists who worked with the ‘aragalaya’ arrested or facing the threat of arrest? Also, why are Colombo’s civil society activists, apt to vociferously agitate on every little sin of the Rajapaksas, not more appalled by this?

We saw this same pattern in 2015 when the advent of a Wickremesinghe-ed ‘yahapalanaya’ (good governance) administration led to once vocal voices adopting a far more placatory tone, willing to even accept the daylight robberies of the Central Bank bond scam, not once but twice. Other uncomfortable memories come to mind. It was by the proverbial skin of our teeth that the nation escaped being afflicted with a notoriously bad Counter-Terror Act (CTA) during that period. Commonly said to be modeled on the United States Patriot Act, this would have been calamitous for civic protestors if it had been pushed through.

Each minor act of defying the writ of the Government was defined as a ‘terrorist act.’ In fact, ‘modeled on’ is too polite a word. To put it bluntly, that draft just had chunks cut and pasted from the Patriot Act, with extra abusive segments added for good measure. If that draft CTA had been proposed by the Rajapaksas, howls of protest would have ensued at the highest levels of civil society. Yet noticeable caution prevailed on this occasion. It was only public outrage that prevented the passage of the CTA.

Pious twaddle on the law being equal

Here again, we have a repeat of that same duplicitous behaviour. Great excesses are committed by the Wickremesinghe regime against protestors but the civic response thereto is faltering. Young activists are arrested for taking away a beer mug from the President’s House while grand crooks who robbed the public purse to the tune of millions, walk free. Where is the equity thereof? Paradoxes abound in other respects. A few days ago, media reports were to the effect that Minister Nimal Siripala Silva had been ‘acquitted’ of serious graft allegations by a committee.

‘Acquittal by committee’? Does the Sri Lankan media not even know the meaning of the term ‘acquittal’? Or is this part of a deliberately chosen strategy to mislead and trick the public? On all reports, it is the ‘President’s Media Division’ (PMD) which had informed of the ‘acquittal.’ Both the media and the PMD must be speedily educated on the meaning and consequences of ‘acquittal’ which can only be through a considered judicial process.

What we have here are politicians appointing committees (perchance of retired judicial officers or whoever) to ‘clear’ allegations against politicians. As much as committees appointed to ‘clear’ the Central Bank Bond scam at the time, this too does not amount to anything very much in terms of the law stricto sensu. Amusingly, the Government has also presented its draft 22nd Amendment to the Constitution. That interalia, restores the powers of the Commission to Investigate Allegations of Bribery and Corruption to inquire cases suo moto (of its own motion).

Moreover, we are told of the Government’s intent to ‘tighten’ accompanying laws against corruption. But who can treat these promises with any measure of gravity when a politician is ‘cleared’ through the convenient device of a ‘committee’ and is thereafter speedily reappointed to a ministerial position? No lessons have been learnt, we will repeat the sins of history, it seems. Even so, let us be spared the pious twaddle of politicians in regard to the equality of the law.

At least, that will be a small mercy.