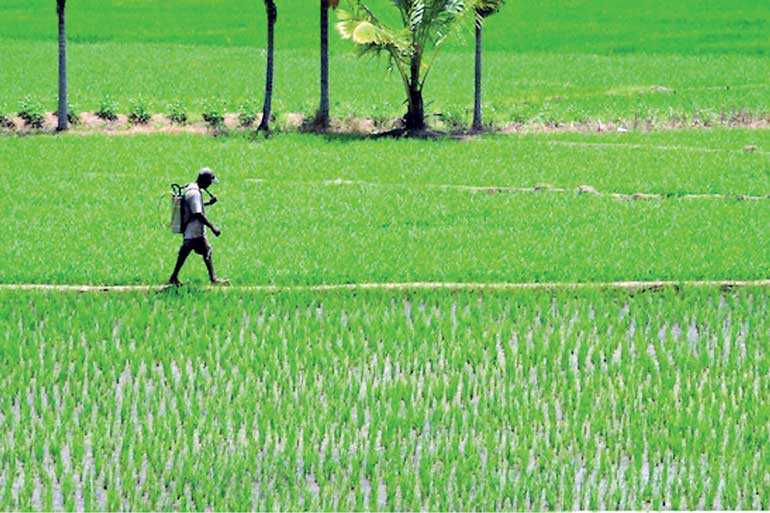 A Cabinet decision on 27th April granting approval to a proposal made by the President to ban the use and the import of chemical fertilizers and other agrochemicals with a view to making Sri Lanka the first country in the world that exclusively practices organic agriculture has resulted in significant impacts immediately upon its announcement.

It is unlikely that the economy will recover this year or even next year from the blow it received from the covid pandemic. Banning of the import of chemical fertilizer will give another blow on the economy on top of the blow from the pandemic.

Farmers who have cultivated paddy, subsidiary crops, vegetables, spices, tea, etc., in a number of districts were finding it difficult or even impossible to obtain fertilizer required for their crops. Long queues of cultivators were seen at many agrarian services centres in various districts waiting to buy fertilizer, but many of those waiting had to leave empty handed as the stocks available were inadequate to meet the demand. According to cultivators, private traders have raised the prices of fertilizers and other agrochemicals exorbitantly, in some instances even by over 100 %. Although the Government wants people to use organic fertilizer instead of chemical fertilizer, there were no outlets for cultivators to purchase organic fertilizer. Even prior to this Cabinet decision, chemical fertilizer at agrarian services centres were in short supply, and farmers have been complaining that they could not obtain sufficient quantities for their crops. In many areas without the required fertilizer, various crops under cultivation appeared to be starving with visible nutrient deficiencies such as yellowed leaves, retarded growth, and vulnerability to diseases. Cultivators express fear that their crops will fail and will not provide returns even for their subsistence, leave alone settling of the bank loans taken by them for cultivation.

As the ban of the import of chemical fertilizer is in force, it is most unlikely that cultivators will be able to apply sufficient quantities of fertilizers to their cultivations. If the required amounts of fertilizer are not provided to crops at the required time, the crops will only produce poor harvests both in terms of volume and quality. All crops – paddy, vegetables, spices, cut flowers, ornamental plants, tea, rubber, coconut and even inland fish produced by culture-based fisheries in reservoirs and ponds – will produce lesser harvests without adequate fertilizer resulting in the increase of prices of the commodities they produce. This means that rice, coconuts, vegetables, tea etc. will go up in price affecting the consumer. Banks will not be able to recover the loans extended to agriculture and plantation.

Sri Lanka’s agriculture production for the last 60 years or so has been made using high yielding varieties (HYVs) of crop. Earlier it was the traditional varieties that were cultivated. HVYs were introduced with a view to increasing particularly the rice production to feed the increasing population without importing rice. HVYs have shorter crop cycles compared to traditional varieties. They cannot compete with weeds and are vulnerable to attacks by pests and disease. They need application of fast responding chemical fertilizers, weedicides and pesticides. On the other hand, traditional crop varieties, which had emerged after undergoing the process of natural selection, does not need application of fast responding chemical fertilizer for growth. Also, they could compete with weeds, were resistant to pests and diseases, and therefore does not need application of weedicides and pesticides. However, compared to HYVs, traditional varieties take longer periods to grow and produce a much lower yield. As reckoned correctly by the then Government and also by the subsequent governments, production solely from traditional varieties is not sufficient to meet the food requirements of Sri Lanka, a country where population is steadily increasing.

Plants need nutrients, i.e., nitrogen (N), phosphorus (P) and potassium (K) in sufficient quantities for growing, flowering and producing fruits and seeds. They get these from the soils where they grow. Plants through their root systems absorb the nutrients available in soils and fix the absorbed nutrients in their roots, stems, leaves, fruits and seeds, etc. In addition to N, P and K plants require water, carbon dioxide (CO2) and sunlight, and other elements such as sulphur (S), magnesium (Mg), calcium (Ca), iron (Fe) and boron (B), which are required in minute amounts, and therefore called micronutrients. When the nutrients are absorbed by the crops being cultivated, the soil on which they are cultivated becomes totally or partly depleted of such nutrients. Therefore, once a crop is harvested, before planting a new crop in the same field or plot, it is necessary to resupply nutrients by application of fertilizer. In the case of annual or shorter crops such as paddy, vegetables, and subsidiary crops, this has to be done at the beginning or at various stages of the crop cycle depending on the cultivar. In case of permanent crops such as tea, rubber and coconut, the soils have to be fertilized annually or intermittently as required.

As announced, the objective of the ban is to prevent production of foods containing heavy metals and pesticide residues that are detrimental to human health, protect the environment – soils and waterbodies – from being polluted with chemical fertilizer and pesticides, and save the foreign exchange spent for fertilizer imports. In 2020 Sri Lanka has spent USD 259 million for the import of chemical fertilizer and pesticides. The major drawback in chemical fertilizers is that in addition to nutrients, they contain harmful impurities, mostly heavy metals such as lead (Pb), mercury (Hg), arsenic (As), cadmium (Cd), chromium (Cr), etc., which are toxic or poisonous even in small concentrations. Those heavy metals may get into the bodies of those who consume the products produced from crops fertilized with chemical fertilizer containing such impurities and affect their health. They also contaminate the soils and water in the environment with repeated application and ultimately accumulate in the body tissues of cattle, fish, fowl, and other animals who get sustenance from such environment. Consumption of those animals as food will also be harmful to human health. Waterbodies like lagoons and lakes when highly contaminated with chemical fertilizer containing N and P will result in eutrophication resulting in heavy algal growth and subsequent oxygen depletion and fish kills.

It may also be possible to significantly reduce the amount of chemical fertilizer used by cultivators by determining the amount of NPK required for each crop, testing the soils in different fields or cultivation slots for the amounts of NPK available in them and advising the cultivators on amounts of chemical fertilizer need to be added to meet the total NPK requirements of each crop. This will prevent overfertilization and thereby the wastage of fertilizer, and excess fertilizer from leaching and contaminating the environment. Government may set up testing laboratories at each agrarian service centre for this purpose. Cultivators need not use the same amount of fertilizer (kg/ha) for each successive cultivation of the same crop. After a crop is harvested some nutrients will still remain in soil, and what is necessary is to test the soil and determine the amount necessary to fill the shortfall of each nutrient required for the next crop. It may be noted that although Sri Lanka uses an average of 300 kg chemical fertilizer per hectare, India and Pakistan use only an average of 165.8 kg and 144.3 kg per hectare respectively.

As mentioned earlier, one of the objectives of banning the import of chemical fertilizer is saving foreign exchange. Organic fertilizer is costlier than chemical fertilizer. In order to save foreign exchange, the Government will have to stop the import of organic fertilizer too. Therefore, it is unlikely that crops will get adequate fertilizer after enforcement of the ban. On the other hand, imported organic fertilizer can also affect the environment since it can carry and introduce alien species of bacteria, fungi, and even higher plants through spores, seeds, etc. If such alien species get established in the country, it will be very difficult to get them eradicated.

The decision to ban the use of chemical fertilizer and other agrochemicals has been at a time when the economy of the country is showing a decline after showing a continuous growth for 20 years. Last year (2020) Sri Lanka’s GDP at 2010 constant prices has recorded a negative growth of 3.6 %. This negative growth was experienced for the first time since 2001. The main reason for this decline of the national economy was the lockdowns and other restrictions imposed by the Government to control the spread of the covid pandemic. All the economic sectors, agriculture, industry and services were affected by the measures imposed by the Government to control covid. This was a blow on the national economy. The covid situation keeps worsening demanding enforcement of more restrictions to contain it. More restrictions enforced will further affect the national economy, and result in unemployment, increased cost of living reduced availability of consumer items, reduced tax income to the Government, etc. However, since control of the covid spread is a priority, the Government has no option, but to impose lockdowns and other restrictions disregarding their adverse impacts on the national economy.

It is unlikely that the economy will recover this year or even next year from the blow it received from the covid pandemic. Banning of the import of chemical fertilizer will give another blow on the economy on top of the blow from the pandemic. Can the economy of the country withstand a double whammy?