Sri Lanka: Govt is unable to rein in its alliance partner EPDP which is using illegal weapons and resorting to intimidation and violence 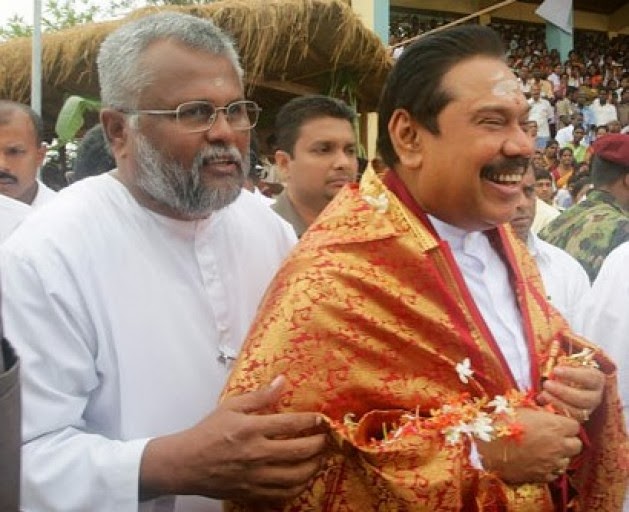 A pre-emptive strike by President Mahinda Rajapaksa appears to have saved his Government from one more accusation before the UN Human Rights Council in Geneva — last week’s murder of Daniel Rexian (42), Chairman of the Pradeshiya Sabha (PS) in Delft, the furthest inhabited island off the northern Jaffna peninsula.
Accusations, including some from sections of the UPFA partner, the Eelam People’s Democratic Party (EPDP), were initially levelled against the Sri Lanka Navy that has a unit on the islet. Another partner, Minister Wimal Weerawansa’s National Freedom Front (NFF) in a statement blamed the TNA for “the first political murder after the end of the conflict on May 19, 2009?. The date marks the military defeat of Tiger guerrillas.

Rajapaksa ordered Police Chief N.K. Illangakoon to direct an investigation by the Criminal Investigation Department (CID). Just seven days later, detectives arrested Kandasamy Kamalendran (47), an EPDP stalwart. He is Leader of the Opposition in the Northern Provincial Council and was one of those in the forefront carrying Rexian’s coffin at the funeral. Also arrested was the PS Chairman’s wife Anita (35) who claimed her husband had committed suicide by consuming poison and later changed her mind to suggest it may be the result of his pulling out a tooth. A letter which the detectives obtained from the deceased’s sister turned out to be incriminating. Written three days before the murder, it had been given to her to be made public if something were to happen. Rexian had alleged that his wife was having an affair with Kamalendran and charged that the latter should be blamed in the event of his loss of life.

Strange but true, reports of sexual trysts by important players in the UPFA in the North as well as in the South have begun to haunt the UPFA Government this week. In the North, however, the issue seems to have more serious ramifications both locally and internationally. This is at a time when the Government is busy addressing issues that are to surface at the March 2014 sessions of the Human Rights Council in Geneva.

The issue was of such serious concern to President Rajapaksa that he telephoned the EPDP leader and Minister Douglas Devananda on Friday night. He wanted to know what was going on after pointing out to the minister that every political party has had its share of similar problems. When lower rungs create issues, it reflects badly on the leadership, he noted. Devananda said he had asked Kamalendran to resign but he had not done so up to now. If he failed, he told the President that the party would pursue disciplinary action against him. He assured that he would not interfere in the Police investigation and was keen to see it pursued to the end. Devananda has already ordered the closure of the EPDP offices in the islands of Pungudutivu and Delft and wants to “completely re-organise” the party.

Accusations by sections of the EPDP that the Navy was responsible for Rexian’s murder followed a reported argument that the late chairman has had with those at SLNS Wasamba, the naval base on the coral island of Delft. This had reportedly arisen over the use of boats to ferry passengers from the Jaffna peninsula to the 14 square kilometre Delft Island. However, a Navy official in Colombo denied there was any serious dispute. Nevertheless, the sequence of events after the murder lay bare a situation that runs counter to the UPFA Government’s efforts to restore full normalcy in the North, more than four and half years after the military defeat of the guerrillas.

Just a month before Rexian’s murder, a man who was having tea at a kiosk in Jaffna had an argument with another carrying a weapon. He pulled out the 9 mm pistol and placed it on that person’s head. Police were called in. They arrested Joseph Patrick Amalraj and seized his unlicensed pistol. Police investigations have revealed that Amalraj was a close confidant of Kamalendran.

The body of Rexian, father of three children, was taken to the Jaffna Teaching Hospital for a post-mortem examination. When it was about to begin, Jaffna’s Judicial Medical Officer (JMO) Dr. Chelliah Sivaruban received an anonymous telephone call on his official land line. He was told to rule that the death was due to suicide. He was courageous enough to refuse. Immediately thereafter, a person described as a member of the EPDP met with an assistant of Dr. Sivaruban and asked him to tell the JMO to declare a verdict of suicide. This was turned down too. Moments later, Dr. Sivaruban was to receive a second telephone call on his land line. This time the caller said he was a member of the EPDP. “If you fail to carry out what we tell you, we will ensure another doctor will conduct the post mortem examination,” he warned. Dr. Sivaruban held the examination and declared that death was due to gunshot injuries. He noted that a 9 mm bullet, embedded in the skull of the victim, was removed.

Rexian’s letter to his sister

CID detectives who took over the probe found that Rexian’s wife Anita had made an allegedly false statement to the Kayts Police who conducted initial investigations. This is because the area is covered by the Kayts Police though a smaller Police post exists in Delft Island itself. Anita was arrested in the island of Pungudutivu on Tuesday morning. In her statement to CID detectives, a senior Police official said, she had confessed to having an affair with Kamalendran. The same afternoon, Kamalendran was arrested at the EPDP office at Park Road in Colombo. Detectives have found that Kamalendran had allegedly forced the late chairman to sign a cheque for one million rupees purportedly as payment to a contractor for road construction work. However, they have discovered that there had been no such work carried out. Detectives have also heard allegations that Kamalendran had tried to sexually abuse Rexian’s 16-year-old daughter. The charge has been made by the latter’s sister when she was interviewed by the detectives.

The Rexian murder has raised questions whether EPDP cadres, contrary to claims by their leader Devananda, continue to retain weapons and are indulging in incidents that contribute to instability in the North. The party has no doubt suspended Kamalendran pending what is being described as a disciplinary inquiry. Yet, two of the NPC opposition leader’s brothers are stalwarts in the EPDP. The fact that illegal weapons, either with or without the official authority of the EPDP, are still in circulation among its members has now become obvious. Worse enough, even after the Northern Provincial Council elections in September that these weapons are being used to create fear psychosis among Government officials, like in the case of the Jaffna Judicial Medical Officer, makes the case even more difficult for the UPFA Government. It is the Government which has to face accusations that it is unable to rein in its alliance partners who are not only using illegal weapons but also resorting to intimidation and violence. This is at a time when the Government has militarily defeated the Tiger guerrillas and allowed an elected Northern Provincial Council to run civil affairs in the north.

The EPDP also came in for stricture by the Lessons Learnt and Reconciliation Commission (LLRC). The commission said it had sought “clarifications from the TMVP (Tamil Makkal Viduthalai Pulikal) and EPDP political leadership regarding specific allegations that were attributed to their respective groups.” The LLRC’s report said: “Whilst acknowledging that there are illegal activities attributed to their parties, their contention was that their names are being used by unknown parties. In this regard, it is appropriate to mention that the leader of the EPDP made the observation that the ruthless internecine warfare unleashed by the LTTE necessitated certain Tamil groups to carry weapons and that although the LTTE-engineered conflict is over, some residual activity could remain for some time. He stated that after heavy rains, some wetness remains.”

The LLRC added: “The Commission is constrained to observe the attitude manifested by the leadership of the TMVP and EPDP in their explanations provide little or no consolation to the aggrieved parties, and tends to militate against any meaningful reconciliation process.” Soon after the LLRC report was made public in November 2011, Minister Devananda threatened to sue it. However, he did not follow through.

Kamalendran, the Northern Provincial Council opposition leader, is no ordinary member of the EPDP. He was a trained guerrilla cadre (see photograph on this page) when both he and Douglas Devananda, among others, were members of the Eelam People’s Revolutionary Liberation Front (EPRLF). Kamalendran was the son of a palm tree tapper from Kalvayal in Chavakachcheri. His mother cooked meals for the EPRLF cadres. The February 1985 attack on the Karainagar Naval Base by the People’s Liberation Army (PLA), the military wing of the EPRLF, led by Devananda, was planned from their house. In this attack, his own sister Shoba and PLA deputy Sinnavan were killed. Later, the parents of Kamalendran named one of their daughters (Kamalendran’s sister) as Shoba.

Kamalendran’s father tapped toddy palms in the Kaithady area in 1989 to raise funds for the EPRLF. The Liberation Tigers of Tamil Eelam (LTTE), which was expanding its sphere of influence, was to move into that area. The man who was to later become the LTTE Political Wing leader, S.P. Tamil Selvan who used the non de guerre Dinesh seized Rs. 100,000. He left a thousand rupees behind saying that may become necessary for them for a funeral. Fearing threats to his life, Kamalendran’s father approached the Indian Peace Keeping Force (IPKF) that was in Sri Lanka at the time for help to travel to India. When that failed, he moved to a refugee camp in Trincomalee and later to a similar camp at Vivekananda School in Kotahena. On a visit to the school, Devananda identified him and obtained his release.
From the Sunday Times political column
ST

Kandasamy Kamalendran, Leader
of the Opposition of the Northern
Provincial Council when
he was an EPRLF guerrilla cadre