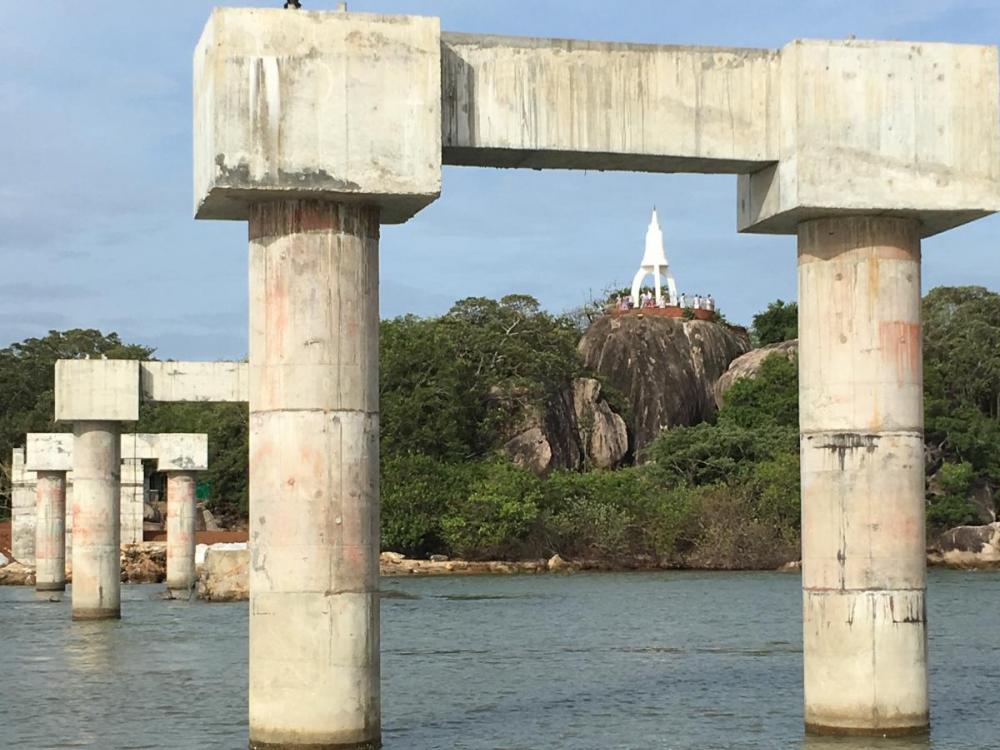 (The newly-built Buddhist temple at Ilankaithurai – re-named Lanka Patuna by the government. A bridge is being constructed to improve access to the site for the increasing number of Sinhala visitors. Tamil Guardian photo)

Former Tamil National Alliance(TNA) Parliamentarian and Leader of Eelam People’s Revolutionary Liberation Front (EPRLF) Suresh Premachandran commenting on the recently passed Office of the Missing Persons Bill said, he was quite doubtful whether this office will fulfil the needs of the families of missing persons. “When former President Chandrika Kumaratunga visited Jaffna recently, some relatives of the missing persons told her that they have handed over their children to the Army and that they should definitely be in their custody and had questioned her whether they would be released or not. She had answered that two years time is needed to reply. Why do they need two years time? If so why have they implemented this office?” Premachandran questioned.

In the matter of conducting medical examinations on the former LTTE cadres, you have emphasized the need for international medical experts. Don’t you trust the medical experts in the North and East?
A: No! The point is there is no proper medical set up in the Northern and Eastern Provinces to conduct a proper medical examination. We do have our doctors in the North and East and we do trust them. It is not at all a problem. The issue actually is whether there are doctors to investigate into this sort of complicated matter, thus, it is necessary to obtain international support or may be other experts to investigate into this matter.

There are 12,000 former LTTE cadres who had undergone rehabilitation in camps, they have been released and have now been integrated into society. 12,000 is not a small number, and we are unaware if it is some sort of a chemical or poison that was injected to these former cadres. There are reports that more than 107 people have died in the post rehabilitation period after being released.

We consulted some doctors over here in Jaffna and they requested for the assistance of international medical experts in this matter. This will not only be a medical check up; but will be an extensive investigation into what sort of chemical has been injected or whether it had actually been injected. We need an organized team to methodically check all the rehabilitated cadres. Only after the medical examinations, will we be, in a situation to tell the former cadres “look you don’t have any complications and you do not have to worry”. There is also the necessity to provide counselling for these former cadres.

Recently I met a former cadre who was physically and psychologically affected. His wife had many complaints about his physical health and he is just 51 years. He had been very energetic earlier, but not anymore. Therefore, we urge that former LTTE cadres do need a proper check up. That is exactly why we are continuously emphasizing on the assistance of international experts in this regard.

There are rehabilitated former LTTE cadres living in European Countries as well as in the Middle East. Why are Northern and Eastern politicians only concerned about the former cadres in Sri Lanka? And so far there have been no such reports about those living abroad, so why is it only in Sri Lanka?
A: We are unaware as to how many went abroad and how many have undergone the government rehabilitation programme. We are even unsure about the numbers of former LTTE cadres in the Middle East and Europe. If they have facilities, these former cadres can undergo medical checkups in the countries where they currently live. They have the liberty to deny the allegations regarding injected chemicals or say that the allegations are true. Such panic situations among former LTTE cadres have only occurred recently. We feel the diaspora representatives can contact the former cadres in European countries to find out about their health. If there are any with similar health complications the diaspora representatives can subject the former cadres for medical examinations.

The Tamil People’s Council had decided to hold a massive protest march in the Northern and Eastern Provinces by the beginning of next month. Tell us the reason behind this protest march?
A: The Sri Lankan Government is on the agenda of establishing Sinhala-Buddhist hegemony in the Northern and Eastern Provinces, as well. They are constructing Buddhist temples and shrines, in places where there are no Sinhalese or Buddhists. There is a Buddhist shrine being built in Iranamadu. The Army had taken around 4 acres of land that belonged to the Kanakambigai Amman Temple to build the Buddhist shrine. In Kokilai a Buddhist temple is being built on a private land and I personally have seen his deed which is 100 years old.

The land owner obtained legal assistance and the Court issued a Stay Order. Despite the Stay Order, building activities are continuing. There is no legal authority to take any action in this regard. They are looking forward to erect a 67 foot Buddhist shrine in Nanainatheevu or Nagadeepa. All are aware that the Nanainatheevu Amman Temple is the very oldest and it is historical too. Constructing a 67 foot Buddhist shrine in front of the temple shows an intention to suppress other religions in the region.

Not only the Buddhist shrines and temples but new colonization is happening in the North and East. In the Northern Province in Navatkuly-Jaffna there is a new Sinhala settlement. This new settlement has nothing to do with those Sinhala families who were already living there. Another settlement is created in Murunkan-Mannar District and there are settlements in Vavuniya. All these settlements have been created after the war and it has continued since the end of the war; and the Army is giving protection to all these activities.

It is simple that the motive is just to convert the North into a Sinhala Buddhist region similar to other areas in the country. However, they must understand that the majority in the North are Tamils and they are either Hindus or Christians. People are not yet properly resettled in their own lands especially in Valikamam North High Security Zones. The Army is still keeping the lands under their control. Not only in Valikamam North, but there are several other places where the Army has occupied private lands in the Jaffna District. Similar land issues prevail even in Kilinochchi and Mullaitivu.

Even the current government is working under the same agenda as the former regime. There is no solution to the occupation of the North by the security forces. The Army is deployed in the North in the name of national security. They just want to keep the Army in the Northern Province. To oppose all these activities we have decided to carry out a protest march in the Northern and Eastern Provinces; as the people have been complaining for a long time.
People have raised their voices for a long time, but the government has never listened to them. They have requested the government and the international community to do away with all these activities. The government that is talking about reconciliation must stop all these agendas. There will be a massive rally on 7 September in Kilinochchi and on 9 September in the Jaffna District. If the government fails to listen to the people they will organize further protests in both provinces.

How do you view the Consultation Task Force on the Reconciliation Mechanisms?
A: People have clearly stated to the Reconciliation Task Force that they don’t have any trust in the government. They have also said that they cannot trust in the local mechanism. They have spoken of the need for international judges and prosecutors to address these issues. Even for the Missing Persons Commission they suggested United Nations and other international officials who are experts in these matters. Therefore people were very clear that they need the assistance of international judges, prosecutors and lawyers in tackling these matters. If the government really accepts the appeal of the people, they must implement their suggestions. If not, there is no point in just having a reconciliation task force and having all sorts of discussions with the people.

How do you view the recently passed Office of the Missing Persons Bill?
A: President and the ministers very clearly stated that this has nothing do with the armed forces. They stated that they will not punish the Army. They further added that this office cannot prosecute anybody. It is just an office to collect data. Complaints can be made regarding missing persons at this office. But according to the law it is quite doubtful whether this office will fulfil the needs of the families of missing persons.

When they say missing persons, they did not just go missing. Those who have abducted them have been mentioned by the relatives and families when giving oral submissions to the earlier Commission. Therefore, it is very well known as to who is behind these persons being missing. They have been mostly taken away by the Army or by various other government forces. In most of the cases the relatives knew who was behind these missing cases. However, no action was taken against them. The Commission that was appointed by the former government which also functioned during the current government did not take any action on this regard. They did not take any necessary steps to even find a single person in the missing persons list. Therefore, whether this new piece of legislation will fulfil the affected people is a question.

Whether it will merely be an office to collect the data or whether they will solve the grievances of the affected families is the doubt.
When former President Chandrika Kumaratunge visited Jaffna recently, some of the relatives of the missing persons told her that they handed over their children to the Army and that they should definitely be in their custody and questioned her as to whether they will be released or not. She answered two years time is needed to reply. Why do they need two years time? If so, why have they implemented this office?