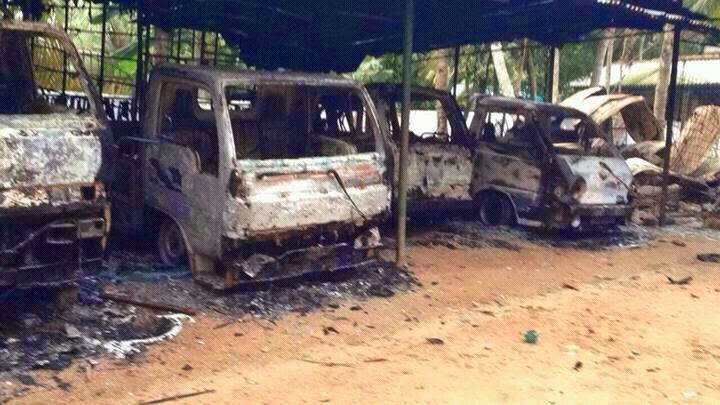 The United National Party (UNP) today accused the government of imposing “unofficial censorship” on media to espouse racism at it pleases and to recreate its image after pushing the country towards destruction.
“The Rajapaksa regime is looking to completely destroy media freedom today,” Opposition Leader Ranil Wickramasinghe said, speaking to reporters after meeting with representatives from several media rights groups in Colombo.

He alleged that news censorship was imposed in the wake of the recent Aluthgama and Beruwala violence in order to “cover up the government’s sins” and not to protect the peace.

He stated that a letter was sent to every media organization as a news censorship following the Aluthgama and Beruwala incidents. It instructed the organizations to do as told or suffer the consequences such as legal action and the revoking of licenses to electronic media, the UNP Leader said.

The media organizations were also warned over the phone not to publish anything regarding the government, he said.

However, he said, that when clashes broke out in Darga Town, the government prevented media from reporting as to who actually went there to provoke religious clashes and attempted to create an opinion that the attack on a Buddhist monk’s vehicle in Aluthgama had led to the incident.

“That is not what really happened. They tried to show that the Sinhalese people living in the area attacked Muslims in anger over the incident,” he said.

He claimed that such an opinion was created in order to cover up another one. It was not residents and Buddhist monks in the area who had held a meeting in Aluthgama and marched to Darga Town but outsiders.

“Bodu Bala Sena was sent there with the backing from certain sections of the government,” he charged.

Wickramasinghe stated that high-ranking police officers in charge of the area had no choice but to allow the meeting to be held in Aluthgama. He pointed out that this resulted in the loss of several lives and damages to property.

“This is what they wanted to cover up,” he said, adding, that on the other hand any Bodu Bala Sena news was allowed to be published.

The UNP Leader state that “unofficial censorship” has currently become a grave issue in the country and that it prevents the truth from being revealed.

He said that the Sinhalese people in the area were unnecessarily blamed over the Aluthgama incident due to the canceling of the truth.

Wickramasinghe stated that when he visited the affected areas, the Muslims there told him one thing: “this was not done by the Sinhalese in the area, but by outsiders.” He said that even the Buddhist monks there corroborated this fact.

The Opposition Leader, however, said that he was happy the President yesterday visited Beruwala again and hoped at least the paying of compensations will now be expedited.

He stated that the unofficial censorship is a big threat to the country’s democracy and that media is being told what to report and what not to report. “Even corruption can’t be reported now.”

Wickramasinghe stated that he might be labeled a “traitor” for speaking about journalists. “If the people protecting KP call me a traitor, it does not bother me,” he said.
AD