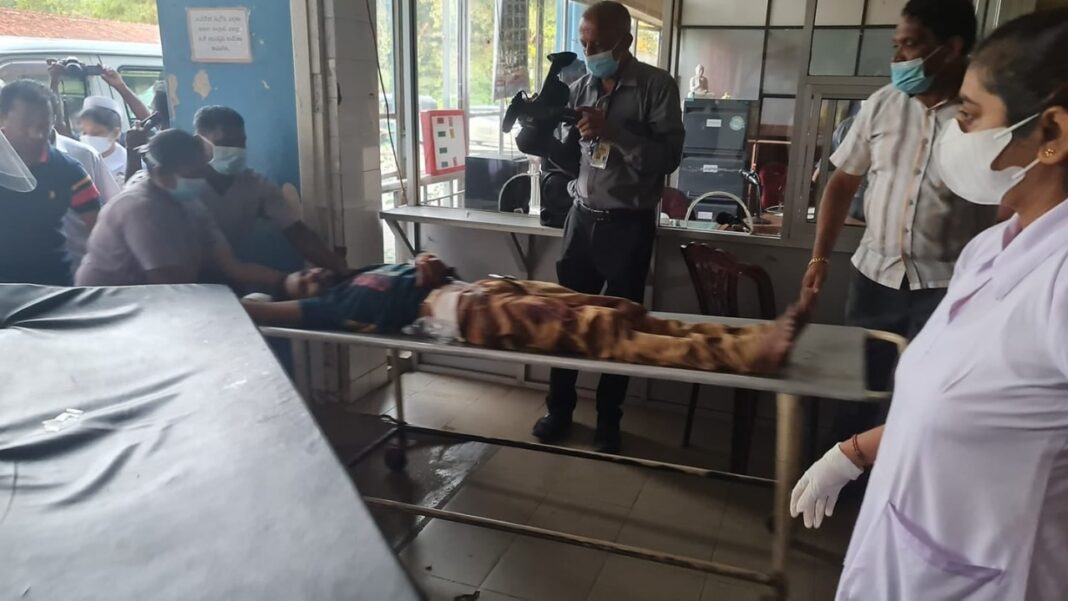 Image: Injured protestor is being admitted to Kegalle hospital.

One person has died and over 10 people injured from gun shot injuries when police used live bullets against the  protestors  in Rambukkana this afternoon.

Mean while issuing a short statement Bar Association of Sri Lanka says that it is shocked and saddened by the incident.

“The BASL is shocked and saddened at the loss of life in the incident this evening at Rambukkana where the police are alleged to have shot at protesters. An independent investigation must be done and the Government must ensure that the police and armed forces act with utmost restraint in the light of the genuine grievances of protesters. We are saddened that previous warnings made by us as far back as January 2022 went unheeded by the authorities. Our members will continue to do their utmost to safeguard the rights of the people of this country. ” – BASL

Videos  taken by citizen journalists the shows police firing tear gas an military in full gear. Some videos show the protestors carrying the wounded and rushing them to the hospital, with one protestor shouting that the police shot a protestor.

Daily Mirror reports that after the incident , protestors  surrounded the Rambukkana Police Station and were hurling stones at the building.

Many cities and towns has seen anti-Rajapaksa protests during the several protests were held across the country, especially in major towns after the  Ceylon Petroleum Corporation (CPC) increased the price of fuel from midnight yesterday.