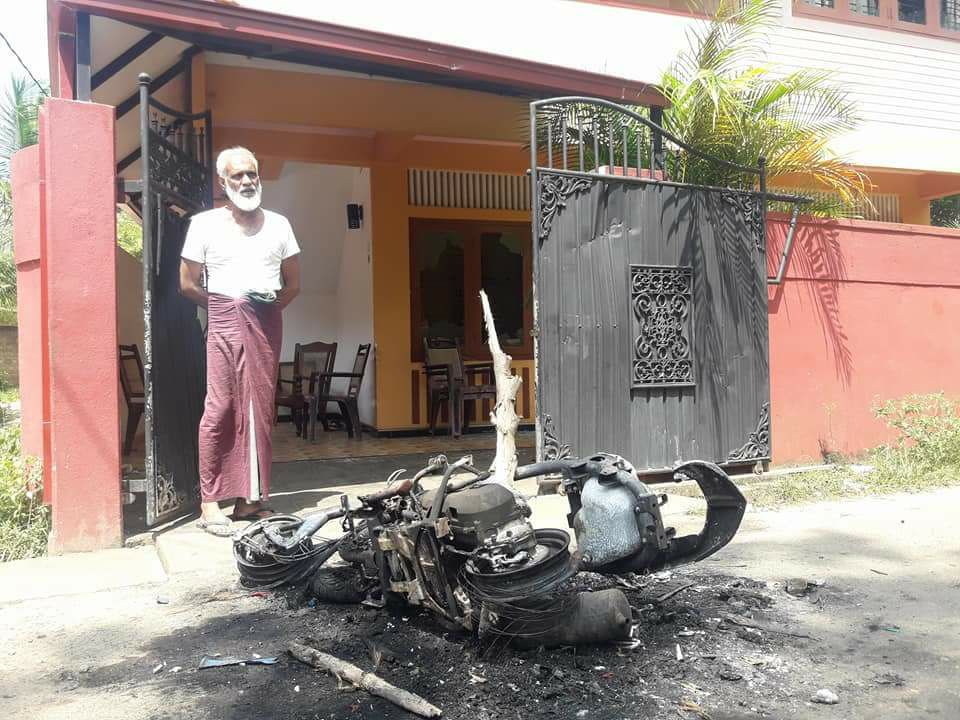 The government took decisive action to put the lid on escalating inter ethnic violence between Sinhalese and Muslims in Gintota over the weekend which led to damage to a large number of homes, businesses and buildings estimated to be close to a hundred. The government actions included sending in police battalions, the police paramilitary Special Task Force and anti-riot squad and the military and a visit to the area by Prime Minister Ranil Wickremesinghe. As a result a conflagration on the scale of the Aluthgama riots of 2014 in the neighboring Kalutara district did not materialize. It might have, if the government had not acted sooner and showed publicly that it had no sympathy with those who attacked others. The arrest of 19 trouble makers, many of whom had come from outside, and the declaration of a curfew, ensured that the violence was suppressed. However, the Muslim community which had to bear the brunt of the violence continues to live in a state of unease.

Religious differences had little or nothing to do with the clash which was between two identity groups making it more akin to an ethnic conflict, rather than a clash of religions. The immediate cause of the conflict was reportedly a relatively minor incident. There was a road accident involving a motorcyclist from one community and a three-wheel passenger from another community. The parties had dealt with their trauma in a reasonable manner, going to the hospital and arriving at a private settlement, with some financial compensation being part of the package. However, external forces had intervened thereafter to escalate the conflict. The fact that an event of this nature which is not uncommon on Sri Lanka’s crowded roads could have escalated so fast is a cause for concern and reveals underlying tensions within the country.

Despite the end of the war nearly a decade ago, there is a continuing negative relationship between the ethnic communities and one which is not spoken about publicly, that needs to be carefully dealt with. According to reports from within the community living in the Gintota area the motor accident was given a communal interpretation when it could have been taken differently, as another regular occurrence that could have happened anywhere. Motor traffic incidents are a common occurrence in all parts of the country. It is not infrequent that in the aftermath of a motor accident, especially where closely knit communities live, and where the victim is from the community, the motor vehicle driver and the vehicle are subjected to violence even if the victim and perpetrator are of the same ethnicity. This has led many persons who are involved in such accidents fleeing the site of the accident even to the nearest police station to protect themselves.

In this particular incident, however, the parties involved in the accident had settled the problem between themselves. But the larger communal tensions within the communities got into play. The initial follow up was between youth of the two communities in the aftermath of a sports event. One group of youth had chided and spoken defiantly to another group from the other community. The initial violence was between the youth of the two communities who took offense at the attitudes of the other. A house was attacked by a group of youths. The matter should have been settled at that level by the community leaders, and if that failed by the local police. But this did not happen because external forces got involved. There are different accounts of who these might be, with organized extremist groups being the suspects, but with also questions being asked about the law enforcement authorities themselves. As rumours have a way of getting multiplied, it would be constructive if the government were to conduct an independent inquiry into this incident. Prime Minister Wickremesinghe has called for an official report, from the Inspector General of Police, on the violence that erupted in Gintota and its surrounding areas over the weekend.

There are extremists on all sides of Sri Lanka’s continuing ethnic divides who are waiting to act as guardians of their community’s interests. This is true of members of all communities and they act with most energy in the areas in which they are a majority. It is therefore important that there should be constant awareness and interaction programmes organized by the government, civil society and by religious institutions, to promote inter-ethnic and inter-religious understanding and togetherness. The government in particular needs to activate its network of district religious committees, recently established under the Ministry of National Integration and Reconciliation. The challenge would be to link them to civil society groups that could energise them and take them to the community level to engage in local level conflict mitigation work.

There also needs to be education programmes on the values of pluralism so that those who are a majority in any part of the country do not think that they are entitled to have special rights as individuals over those who are not in a majority. The government also needs to give attention to educating those in the security forces that they are not expected to take sides in any inter-community conflict, but they are there to ensure that the law is followed and implemented, and to deal firmly with any and all who break the law. The manner in which the government took swift action in the case of the Gintota violence at th highest levels and the security forces acted on those orders show that the lesson of the 2014 Aluthgama riots have been learnt and will not be repeated.

As this government is one that is not based on ethnic nationalism and is also a combination of the two major political parties, it is more representative of the mainstream polity. It is also more acceptable to the ethnic and religious minorities. There is a general acceptance that this government is genuinely liberal where people’s freedoms are concerned. However, the downside to freedom and opening of space to voice opinions and to criticize is that this space is being exploited by those who do not accept a liberal and pluralist view of society. This can be seen on the social media which is filled with hate speech. There is a strong anti Muslim discourse that claims that they have links with international terror groups, are increasing their population too fast and surreptitiously introducing birth control drugs to unsuspecting Sinhalese men, women and children.

[alert type=”success or warning or info or danger”]A new feature on the social media, which is running without any control, is the naming and shaming of Buddhist monks who join inter-religious groups that seek to promote reconciliation and amity at the community level.[/alert]

Civil society groups have reported finding it harder to get Buddhist monks to join because they fear being targeted by nationalist purveyors of hate speech. So far the government has not acted against those who engage in hate speech on political platforms and on social media. The government has so far not taken legal action against groups and individuals who are purveyors of hate speech, nor do most government leaders engage in systematic debate and counter-messaging campaigns to promote an ethos of pluralism in the country.

A major criticism of the government that comes from all sides of the political spectrum, though for different reasons, is that the government is indecisive and not strong. Unfavorable comparisons are made in this regard with the former government.

On this occasion, the government is reported to be collecting material relating to social media that spreads hate. During his visit to Gintota, the Prime Minister had called for action to be taken against anyone causing violence and unrest. As a two-party government it is difficult for the government to come to quick decisions especially on controversial issues. This creates a dangerous space that those who wish to destabilize the polity can utilize and which needs to be closed. It is necessary for the government to start acting more decisively against those who engage in violence and voice extreme nationalist opinions in an inflammatory manner which provokes others to inter-ethnic or inter-religious violence.