Sri Lanka: Gotabhaya over rule reduction of military presence in the Northern Province 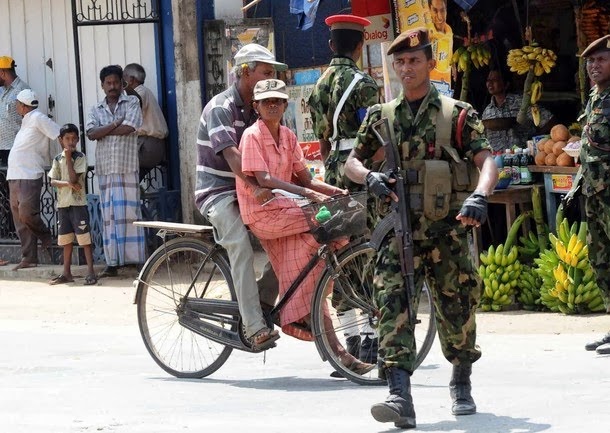 Defence Secretary Gotabhaya Rajapaksa yesterday said that the government wouldn’t demobilize the Army or reduce military presence in the Northern Province under any circumstances, though a section of the international community was pushing the government on the diplomatic front ahead of the 25th session of the Geneva-based United Nations Human Rights Council (UNHRC). The war veteran was responding to Western calls for a smaller army in the wake of the LTTE’s battlefield defeat in May, 2009. British High Commissioner John Rankin was in New Delhi during the second week of February to urge heads of missions of member states of the UNHRC accredited to Colombo.
HC Rankin sought their support for the US-UK initiative, while US Ambassador in Colombo Michele J. Sisson met several Permanent Representatives of UNHRC members based in New York to convince of the need to move the resolution. The US and UK are seeking as many countries as possible to co-sponsor the resolution.
Asked whether the government would demobilize some formations raised during eelam war IV (June 2006 to May 2009) to appease Western powers threatening to haul Sri Lanka up before an international war crimes tribunal over accountability issues, the Defence Secretary said that the peacetime deployment of the Army as well as the acquisition of armaments too, was the prerogrative of the government.
Recently British High Commissioner John Rankin as well as Norwegian Ambassador Grete Løchen inquired about the military presence in the Northern Province when they met Jaffna Security Forces Commander, Maj. Gen. Udaya Perera. The Norwegian envoy inquired about the possibility of demobilization.
The Defence Secretary told The Island that United Nations Human Rights Commissioner Navi Pillay too, had called for demobilization of the Army in accordance with their overall plan to destabilize the country. An irate Rajapaksa said that large scale demobilization would cause a major social upheaval. “Can any sensible government send home those who risked their lives in the battlefield. Demobilization can cause uncertainty and political turmoil, thereby undermine social as well as economic stability. Perhaps, those working closely with the LTTE rump expected us to send men home believing such a course of action will lead to a major crisis.”
The armed forces had been deployed in support of the post-war recovery projects and people of all communities benefited from their expertise, he said. President Rajapaksa endorsed a plan to double the army at the onset of eelam war IV.
The government wouldn’t do anything to jeopardize security, the Defence Secretary said, pointing out that those who now wanted the government to demobilize the Army went to the extent of recognizing the LTTE’s conventional military deployment across eight districts in February 2002.
Commenting on US concerns over intimidating military presence in the Northern Province, the Gajaba Regiment veteran pointed out that the US was concerned only about its security as well as its closest allies. The Defence Secretary said that the US was fully aware of sharp reduction of Jaffna military presence since the conclusion of the conflict, though it acted as if Sri Lanka was retaining wartime strength in the Northern Province. The Defence Secretary said that the US maintained substantial forces outside US territory to ensure safety and security of its citizens as well as those of its closest allies. Why couldn’t they realize that our deployment was nothing but to ensure that the LTTE wouldn’t make an attempt to reorganise again, the Defence Secretary said.
Presidential Secretary Lalith Weeratunga recently briefed the international community in Geneva and separately met US officials to explain the implementation of the Lessons Learnt and Reconciliation Commission (LLRC). Weeratunga assured that there had been a 30 per cent drop in the military strength in the Northern Province since the end of the war.