Sri Lanka: Gotabaya’s Triumph Is Constrained by Circumstances Beyond His Control – Devaka Gunawardena

As was widely predicted, Gotabaya Rajapaksa, of the Sri Lanka Podujana Peramuna (SLPP), decisively won Sri Lanka’s presidential election on November 16. His opponent, Sajith Premadasa, of the United National Party (UNP), seemed to be catching up in the final few weeks of the race. It now appears that the result had been determined beforehand.

In hindsight, little could have changed the course of the election in the short timespan since it was gazetted in September. Yet the seeming inevitability of Gotabaya’s victory does not hide the fact that he won during a period of great uncertainty around the world.

Although Gotabaya is triumphant, his win is both the product of and constrained by a set of circumstances beyond his control. On the one hand, he has benefited from the right-wing populist wave that has swept the world over the past few years. On the other hand, the build-up of debt in emerging market economies and its impact on Sri Lanka – including mega infrastructure projects initiated under his brother, Mahinda Rajapaksa’s previous regime – point to a fragile economic situation that could undermine Gotabaya’s government.

To many outside observers, Gotabaya’s victory seemed to be rooted in the increasing polarisation between his Sinhala base and the Tamil and Muslim communities. He offered a nationalistic solution to popular disenchantment with political institutions and economic anxieties. But the picture here is not monolithic as well.

While many Tamils and Muslims voted against Gotabaya, their electoral participation signifies increasing engagement in mainstream politics. In addition, a higher proportion of Sinhala voters in rural areas voted for Sajith, although he lost those areas to Gotabaya as well. Still, the vote margins indicate the potential traction of welfarist politics.

A progressive response to the next government must leverage these trends to reverse the hard authoritarian direction of politics in Sri Lanka. Progressives must offer a program that speaks directly to ordinary voters’ economic concerns by building bridges between ethnic and religious communities. In the short-term, it will not be easy.

Austerity measures under the next government will likely continue to shift the economic burden from the rich to the poor. On the flip side, however, even though Sri Lanka has long been divided across lines such as ethnicity and religion, working-class politics offers the opportunity to unite people and go beyond a neoliberal system in crisis. That includes defeating the far-right forces that have thus far benefited from the situation.

On the surface, Gotabaya’s victory appears to vindicate the longstanding narrative that Sri Lankan politics is determined by ethnicity. He trumped Sajith in the predominantly Sinhala South but lost in the predominantly Tamil North. Yet the global context of Sri Lanka’s ethnic dynamics has changed significantly. This process highlights the potential for a different configuration of political forces.

Muslims, for example, have become the primary target of Sinhala nationalist attacks in recent years, in the period after the civil war between the government and the Liberation Tigers of Tamil Eelam (LTTE) ended in the latter’s defeat in 2009. The Sinhala nationalist strategy reflects the intersection of an earlier attempt to consolidate power during Mahinda Rajapaksa’s tenure, the global discourse on Islamophobia that has intensified after 9/11, and the outgoing government’s failure to anticipate the Easter Sunday attacks by Salafist terrorists earlier this year.

In addition, Tamil voters’ participation in the national electoral contest signifies another new dynamic, as Ahilan Kadirgamar has pointed out. Tamils may have voted en masse to try and stop Gotabaya, but they also ignored Tamil nationalist calls for a boycott. Thus, their exercise of the franchise offers an entry point for democratic forces.

To build on their engagement, progressives must construct a program that appeals to marginalised voters across the island. Just as minority communities in other parts of the world have become important constituents of progressive coalitions, Tamils and Muslims can work together with a progressive Sinhala constituency. In the meantime, the right-wing strategy to divide and conquer along ethnic lines will likely use dog-whistle racism to reinforce the SLPP’s Sinhala vote base. The democratic opposition to the next government must refuse to occupy this political space. Like other right-wing populists, Gotabaya’s base managed to persuade enough ordinary Sinhala voters, disenchanted with the outgoing government, to vote for him.

He appeared to offer a fresh solution. The contradictions will multiply, however, as soon as Gotabaya begins governing. Taking advantage of the resulting tensions will require appealing to the working class Sinhala voters who will likely face continued impoverishment under Gotabaya’s government.

The possibility of a more acute rupture is already apparent in the seething discontent of ordinary people that helped propel Gotabaya to victory against the outgoing government led by the UNP. Gotabaya may have increased his vote totals in Colombo’s suburbs, but the relatively higher proportion of people who voted for Sajith in rural areas outside the SLPP’s southern stronghold shows the extent to which Sajith’s welfarist message spoke to people’s anxieties about the increasing cost of living. The problem is that the solution Sajith offered was not nearly bold enough.

Conversely, Gotabaya’s success in winning over disenchanted voters in the south highlights the failure of the UNP to break with neoliberal policy. His strategy, however, operates within the constraints of the same system. For example, Gotabaya proposed concessions for farmers in his manifesto, but he also offered tax concessions for the highest earners and private investors.

Holding the next government accountable will require pointing out the ways in which ordinary people across all communities will be forced to bear the burdens of economic policy that incentivises financial speculation. Progressives must highlight the impact of reductions in income and corporate taxes, disparities in budget allocations for social services, and more. The corollary would be to demand a progressive solution to the ethnic question, including fighting for devolution and the abolition of the executive presidency, as the way of implementing redistributive measures.

Although the next government will likely embrace a more vindictive brand of capitalism, Gotabaya’s victory would not have been possible without the emergence of right-wing populism in response to the global economic crisis of the past decade. Centrist neoliberalism has failed to produce an adequate response to people’s frustrations.

Similarly, Sri Lanka’s presidential election cannot be understood without acknowledging these circumstances. What we have witnessed is the Sri Lankan manifestation of the death knell of the liberal international order and the turn to transactional, business-style politics of authoritarian strongmen.

The only option now is to identify a progressive coalition that can mobilise and present an alternative solution when Gotabaya’s government inevitably faces the latent contradictions of the post-crisis global order. That means being prepared for the next wave of fiscal consolidation, especially in the event of continued global stagnation and debt build-up, and the repression that austerity will likely require. Gotabaya’s regime will depend on balancing concessions and coercion. More likely than not he will lean toward the latter when the economic situation becomes untenable. 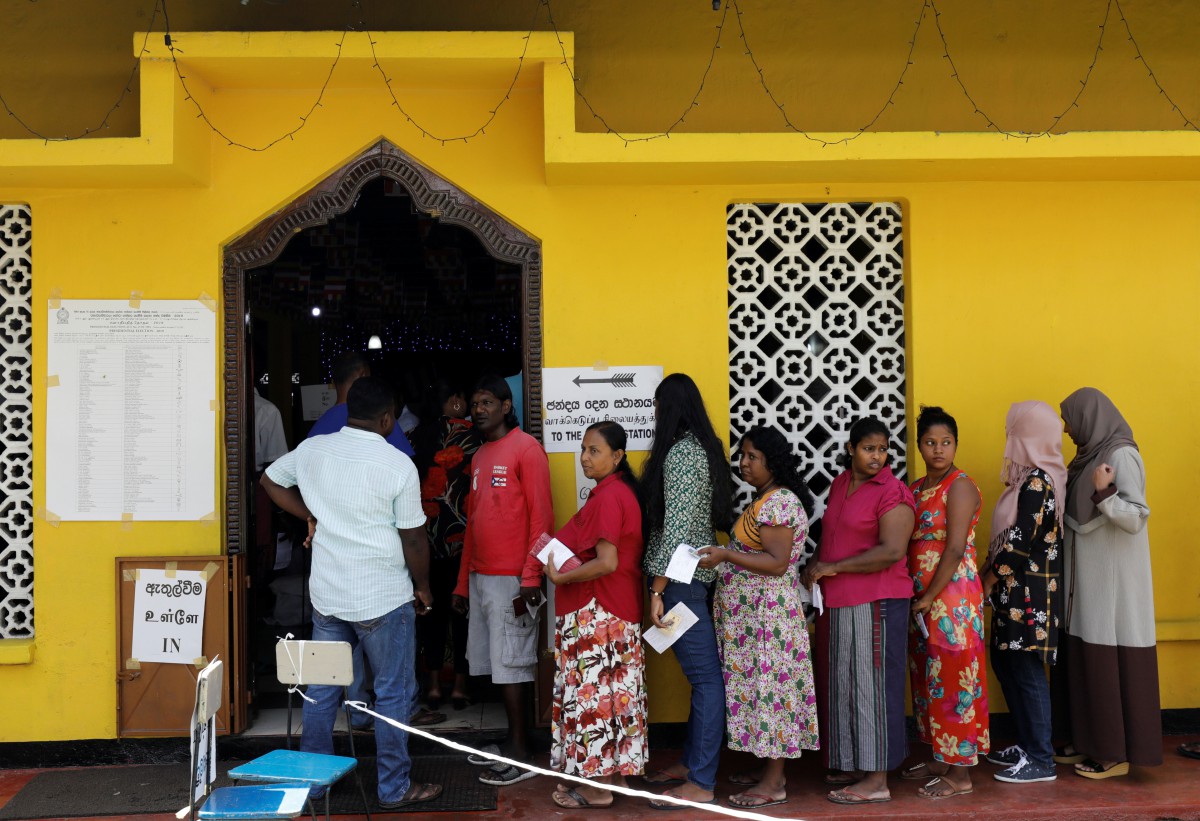 People stand in a line to cast their vote during the presidential election in Colombo, Sri Lanka November 16, 2019. Photo: Reuters/Dinuka Liyanawatte

But like right-wing populists around the world, Gotabaya has multiple tools at his disposal. During the election, the SLPP ran a well-oiled PR machine. Disinformation was picked up by mainstream media outlets, such as the claim that Sajith had signed a pact with the leading Tamil party to break up Sri Lanka.

Nationalist trolls dominated social media. Conspiracy mongering, however, can only be defeated by a popular message that appeals to the working class majority. The biggest element of Gotabaya’s victory was the enthusiasm his party had, compared to the other side. This enthusiasm gap demands that progressives take far more seriously the ongoing battle of ideas.

Progressives must now push back by engaging clearly and directly in class politics. Progressive leadership that speaks truth to power can hold the new government accountable. But the clarity of political opposition will only come from the moral urgency in acknowledging the dire economic situation facing most people, and which will also make it easier to fight for a progressive solution to the ethnic question.

Accordingly, that means offering straightforward solutions: taxing the rich, increasing public investment for universal services, and so on. Currently, Sri Lankan politics is limited to the discourse on corruption and technocratic solutions of elite experts. Instead, only by engaging directly in class politics and challenging nationalists in a frontal manner can the latter be defeated.

Given the emergence of strong left-wing challengers in places like the US and UK, it is becoming increasingly obvious that the politics of nationalist reaction is not the only solution to the crisis of the neoliberal system. Defeat hard authoritarianism, however, requires engaging in class politics that speaks to the diverse, everyday issues of people across communities. That means bringing people from different backgrounds into a movement that can challenge the nationalistic defence of capitalist interests represented by Gotabaya.

Gotabaya may have won in Sri Lanka, but the battle is just beginning around the world. The question remains whether the progressive opposition that must quickly fill the vacuum created by the UNP’s implosion can provide leadership and direction to popular frustrations.

The unmet expectations held by many in the South may have contributed to Gotabaya’s victory, but those voters could also become the potential gravediggers of a hard authoritarian regime. How resistance plays out will depend on a combination of factors that require seeing all Sri Lankans’ struggles for a better life as part of a global arc.

Devaka Gunawardena has a PhD in cultural anthropology from UCLA and is the Sri Lanka Coordinator of the South Asia Office of the IndustriALL Global Union.