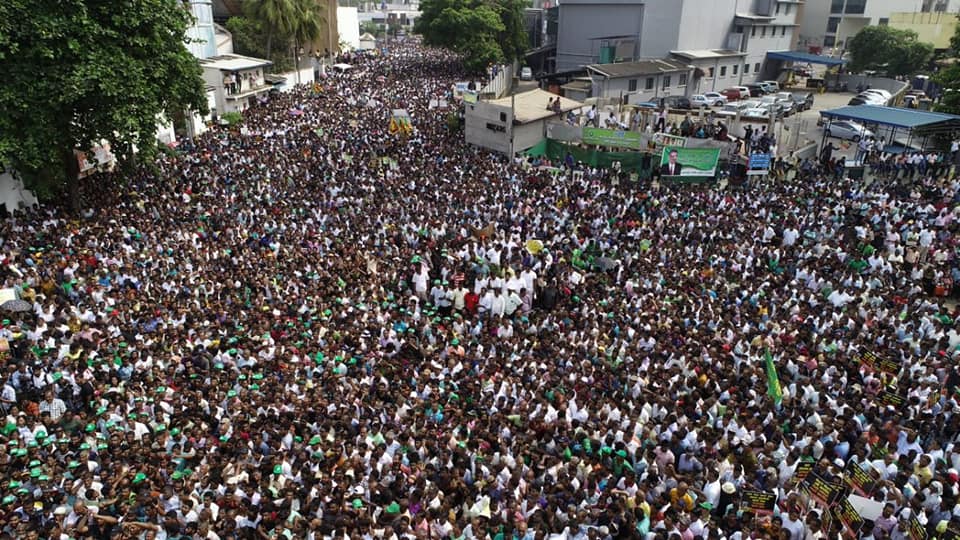 Whatever turn developments may now take, Sri Lanka’s fragile process of democratic recovery is in peril.

Last Friday, Sri Lanka’s President Maithripala Sirisena sacked Prime Minister Ranil Wickremesinghe and appointed Mahinda Rajapaksa, his political rival until the day before, as the new Prime Minister — a surprising move that Mr. Sirisena made in order to resolve a deepening political dispute between himself and Mr. Wickremesinghe. But this act has only pushed Sri Lanka into an unprecedented constitutional crisis, beginning a potentially dangerous phase of an on-going three-cornered power struggle among three leaders.

At the centre of the crisis is the lack of clarity as the new Prime Minister seems to have been appointed without a constitutionally valid vacancy for the position.

Crux of the issue

The entire operation of altering the composition of the government seems to have been executed in a great hurry and in secrecy. There is also lack of clarity whether Mr. Sirisena’s letter (removing Mr. Wickremesinghe) had actually reached him by the time Mr. Rajapaksa was sworn in. This has led some commentators to call it a ‘constitutional coup’.

The position by Mr. Wickremesinghe aggravates the seriousness of this constitutional dispute. Dismissing the constitutional validity of the presidential action, he has argued that he still commands a majority in Parliament. His line of argument is that only Parliament has the constitutionally sanctioned authority to decide whether he could continue in office as PM or not. It also suggests that as long as there is no no-confidence motion passed in Parliament against him and the cabinet, his position as PM cannot be invalidated by the President at his will.

Mr. Wickremesinghe has also cited the fact of having defeated a no-trust motion brought against him a few months ago, and that situation, of Parliament’s majority expressing faith in him, remaining unaltered.

The argument seems to have derived its salience in the context of the 19th Amendment to Sri Lanka’s Constitution, passed in 2015 under the joint political leadership of both Mr. Sirisena and Mr. Wickremesinghe. It curtailed powers of the President under the 1978 Constitution (the original) as well as the 18th Amendment passed in 2010. Among the presidential powers taken away by the 19th Amendment, which is valid, is the one pertaining to the President’s powers over the PM.

The 19th Amendment, which created a dual executive, made the PM’s position secure from the arbitrary actions of the President. Thus, the office of the PM falls vacant only under limited circumstances. Death, voluntary resignation, loss of support in Parliament, rejection by Parliament of the budget, and ceasing to be an MP are these circumstances. Sacking by the President is certainly not in this list.

By this change, the 19th Amendment has also restored the Westminster framework of relationship between the head of state, the PM, and Parliament.

All these make the constitutionality as well as democratic legitimacy of the actions of Mr. Sirisena less than clear.

An argument put forward on behalf of the President is that when the United People’s Freedom Alliance, which was a partner in the so-called unity government, informed the Speaker last Friday that it was leaving the ruling coalition, the cabinet automatically stood dissolved, thereby creating a vacancy for the office of the PM. This is not an argument derived from any explicit provision of the Constitution. It is merely a political argument. What it does is no more than confirm that the composition of the coalition government was altered. It does not automatically lead to the loss of constitutional validity of the cabinet and the position of the person holding the office of the PM.

Mr. Sirisena’s address to the nation on Sunday did not clarify the constitutional issue at hand. He cited political and personal reasons why he could not partner with Mr. Wickremesinghe as the PM. But his assertion that he acted fully in accordance with the Constitution is only a claim. It awaits clarification. What is in dispute is not the total breakdown of relationship between the two leaders, leading to a collapse of their coalition. What is in doubt is the constitutionality of a series of actions by Mr. Sirisena on Friday. And if they are valid at all, they set a bad precedence for future constitutional governance in Sri Lanka. Contrary to the letter and spirit of the 19th Amendment, no PM will be secure in his/her position against arbitrary dismissal by the President. These circumstances also warrant judicial intervention to resolve the constitutional doubt.

Amidst this, the political dispute between the new coalition (Sirisena-Rajapaksa) and the Wickremesinghe led-United National Party (UNP) has now reached a stage of open confrontation. Mr. Wickremesinghe has refused the leave the office of PM as well as the official residence in Colombo. Speaker Karu Jayasuriya has written to Mr. Sirisena demanding that the rights and privileges of Mr. Wickremesinghe be protected, “until any other person emerged from within Parliament as having secured the confidence of Parliament”. The Speaker has implicitly acknowledged that Mr. Wickremesinghe is still the constitutionally legitimate PM.

Obviously, Mr. Wickremesinghe and the UNP want to take the battle to Parliament where the UNP feels that it can secure majority support. Meanwhile, Parliament has been prorogued by the President till November 16. As the numbers stand at present, Mr. Rajapaksa does not enjoy a majority in Parliament. The time left ahead will give Mr. Sirisena and the new PM enough time and space for horse trading. Ranged against this formidable combine that has been consolidating its grip on state power and institutions since Friday, are Mr. Wickremesinghe and the UNP who have only limited options — testing his floor strength, bringing a motion against Mr. Rajapaksa, and political defiance. He can also go to the Supreme Court.

If the UNP does so, the Supreme Court, which has been on a path to regaining its institutional independence and autonomy, will be called upon to adjudicate over a very sensitive power struggle among top politicians. The days ahead could be trying time for the judiciary as well.

Meanwhile, in planning his next moves for political survival, Mr. Wickremesinghe should also realise that he is partly to blame for the political imbroglio. His inability to establish a stable working relationship with the President to run the coalition government, casual disregard for the popular mandate he and Mr. Sirisena jointly won in 2015 for corruption-free governance and politics, lackadaisical attitude to constitutional reform and reconciliation, and gross neglect of popular demands for better economic governance have severely eroded his popular standing.

The biggest political irony is this. The collective failure of Mr. Sirisena and Mr. Wickremesinghe to be faithful to the 2015 mandate has now brought Mr. Rajapaksa back to power on the invitation of one party in a coalition which dislodged him from power.

Whatever turn the crisis may take, Sri Lanka’s fragile process of democratic recovery is in peril.