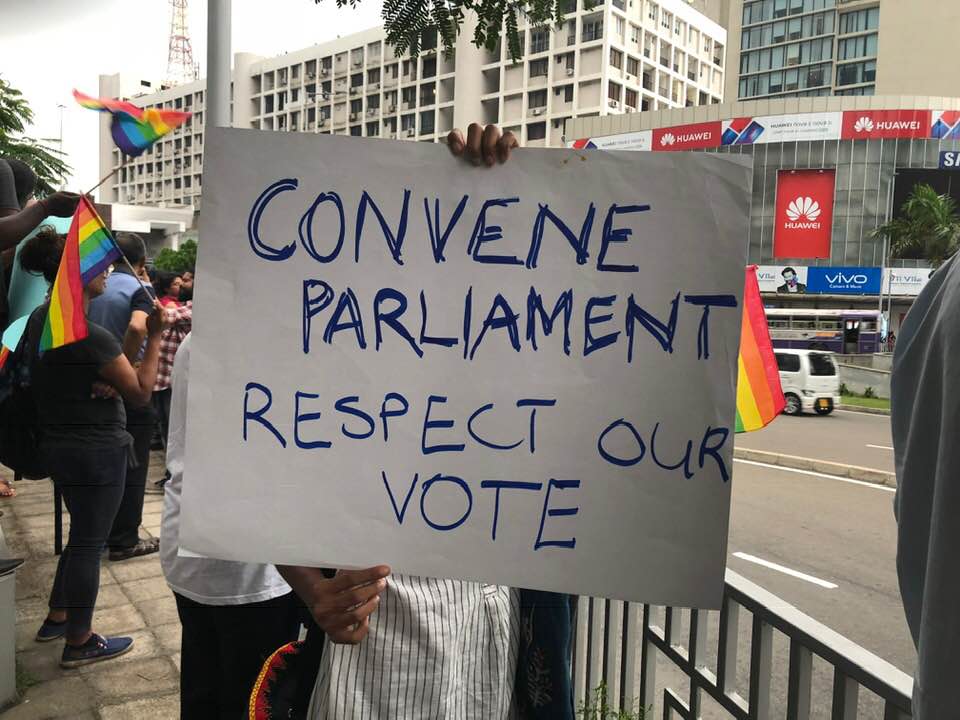 By now the country is slipping into some form of anarchy. Beyond the prorogation of the parliament, some State institutions have come under groups who decide for themselves by force leading to anarchic situations in a country without proper governance. This is a direct result of President Sirisena ousting PM Ranil Wickramasinghe by appointing Kurunegala District MP Mahinda Rajapaksa as PM on Friday night on 26 October (2018).

The only way this could be turned into a constitutionally acceptable move is by establishing a clear majority in parliament. Reason for parliament to be prorogued till 16 November is to collect the required numbers. There had been umpteen number of such cross overs in this parliament. There are politicians who remain as Ministers, despite change of governments over the decades. This was also how the 2015 January government change was orchestrated. Then too, the opposition leader who had no majority in parliament was appointed PM and a majority was worked out on the strength of the presidency.

Allowing and tolerating such low political culture is what provides politicians the space to violate the sovereignty of the people in electing decent governments. Sovereignty of the people is an inalienable constitutional right. It is the people who have the right to change and elect governments. We strongly believe and are convinced the President should not be allowed the right to change governments for his own political and personal necessities.

We do have very serious issues with this “good governance” rule over workers’ and trade union rights. We, along with other oppressed people have serious and real issues with this government’s economic policy that has led to a dramatic collapse of the Rupee value, resulting in steep increase in cost of living and a fast decline in efficiency and quality of essential services. It is the working class and the people who therefore have the right to decide on the fate of this government. If the sovereign right of the people to change and elect governments are allowed to be suppressed by these constitutional coups, it would allow workers’ and human rights and civil liberties to be suppressed as well.

We therefore demand a parliamentary election to honour the people’s right to sovereignty in electing a government of their choice.

For the working people, it is on their organised strength as trade unions they could campaign for and win their rightful demands for decent work and wages. With such strength, it is in co-operation and in solidarity with other oppressed people including fishermen and peasantry that workers could further strengthen their struggles. Therefore, in this very unstable situation amidst the conspiracy, we will have to depend on our strength to place before society, our main demands,