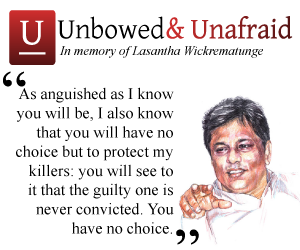 It is exactly four years since Lasantha Wickrematunga, the former editor of The Sunday Leader, was murdered. The proverbial ‘unidentified gunman’ who killed him and dozens of our colleagues still reigns.
Today the Free Media Movement(FMM) commemorates not only the death of Lasantha Wickrematunga but also all Sri Lankan journalists who were killed by the same ‘unidentified gunman’. At the same time, FMM calls on civil and political society to take the lead in abolishing the killer politics that create and foster murderers and the culture of impunity that allows killers to go scot-free.

The murder of Lasantha Wickrematunga marked the symbolic climax of the unprecedented media suppression that prevailed in Sri Lanka during war time. Though, it has been four years since this murder, committed with the absolute intention of suppressing the media, his killers roam freely within society. The state sponsored culture of killing that claimed him, continues to terrorizie society. The Government’s patronage culture of impunity allows not just the murderer of Lasantha Wickrematunga, but also hundreds of other murderers to roam free.

In a society where the culture of the killing of human rights activists and journalists prevails,  there is no place for dissent or political criticism. This is the frightful reality we experience at present. And this is the context in which we commemorate the fourth death anniversary of Lasantha Wickramatunga. On this occasion, FMM re-emphasises the importance of bringing the culture of impunity to an end.

FMM would like to recall that Lasantha Wickrematunga died bravely, fighting for the freedom we  all long for today. Four years ago, the shots fired by the “unidentified gunman” silenced   not only Lasantha Wickremathunga but also free expression.  In a country where freedom of the press is suppressed, protecting and strengthening peoples’ rights becomes harder because there is no powerful voice to defend those rights.  Whether it is ithe independence of the judiciary, right to life of prisoners, students’ right to protest or any other basic right, this is the situation we  face today.

On this fourth death anniversary, in the name of all our colleagues who sacrificed their lives for the right to free speech, we appeal to all those concerned to prioritise the issues of abolishing the culture of impunity and re-establishing freedom of expression in Sri Lanka.