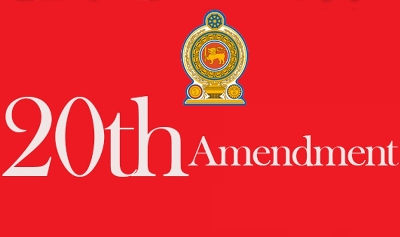 Transparency International Sri Lanka (TISL) is deeply troubled by the plight of several independent commissions and the regression of transparency and accountability as a result of provisions within the proposed 20th Amendment to the Constitution. Key amongst these concerns are the Right to Information, corruption investigations, oversight of public finance and the ability to conduct free and fair elections.

Despite assurances that the Right to Information (RTI) will remain sacrosanct within the constitution, TISL wishes to highlight to the public and members of parliament, provisions of the proposed 20th Amendment which could severely compromise the RTI framework. As the RTI Act stipulates that the Commission must be appointed by the Constitutional Council and the amendment removes the Constitutional Council, the proposed Parliamentary Council will not be able to make recommendations given its limited scope and powers, thus putting the operationality of RTI at risk.

TISL Executive Director Asoka Obeyesekere said, “Since RTI became operational in February 2017, we have witnessed firsthand the transformational impact that it has had on communities and individuals across the country. Whilst it is encouraging that a citizen’s fundamental right to information has been retained, compromising the functionality of the RTI Commission, even if done so inadvertently, will seriously weaken the Right to Information”.

TISL is also concerned by the repeal of Article 156A of the constitution via the proposed 20th Amendment. Further to compromising the constitutional recognition of the Commission to Investigate Allegations of Bribery or Corruption (CIABOC), the repeal of this Article also strips CIABOC of the suo moto powers it was afforded through the 19th Amendment, to initiate investigations of its own accord.

Obeyesekere noted, “It has been a longstanding public grievance that law enforcement authorities wait for complaints to be filed to take action. Stripping CIABOC of the proactive power to undertake investigations without a complainant, sends a negative message to the public vis a vis the government’s commitment to combat corruption”.

Furthermore, despite the mandate of the National Procurement Commission not being fully operationalised, the existence of the institution is nonetheless important to ensuring a transparent and accountable procurement structure. Obeyesekere added, “Public procurement is a high-risk area for corruption. Whilst recognising the importance of the President’s own commitment within his manifesto to eradicate corruption and promote efficiency, we call on the government to recognise the importance of the institution of an independent procurement commission to realise this commitment”.

Provisions in the proposed 20th Amendment which impact the Election Commission of Sri Lanka (ECSL), also curtail the ability of the Commission to prevent or take action against the misuse of public property during elections. The proposed 20th Amendment limits the scope of guidelines issued by the ECSL, by preventing the Commission from issuing directions on “any matter relating to the public service”. This lack of accountability could potentially compromise the integrity of future elections.

Obeyesekere concluded, “In its present form, the proposed 20th Amendment severely compromises the framework of oversight and accountability currently enshrined within the Constitution. The repeal of the Constitutional Council and the introduction of a weaker Parliamentary Council concentrates power in the Executive at the expense of the Legislature and Judiciary. Whilst recognising the public mandate for constitutional reform provided at successive elections, we call on the government to acknowledge these red flags and caution against creating an environment conducive for corruption”.