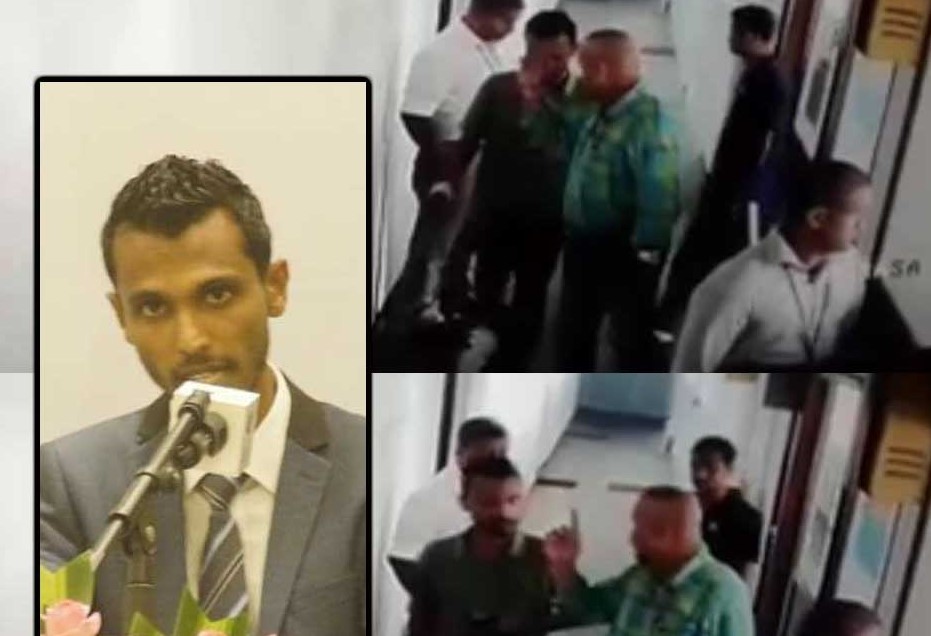 Former Editor of the Digital and New Media Unit of the Associated Newspapers of Ceylon Ltd. (Lake House) and founder of popular social media page ‘Madyawediya’ Madhuka Thaksala Fernando has been attacked and issued death threats by the President of the Sri Lanka Podujana Peramuna (SLPP) trade union of Lake House and a number of other SLPP thugs.The incident had taken place yesterday evening (10) at Lake House. The attack had been carried out by a group of 15 individuals including the President of the SLPP Trade Union Chandana Bandara and ANCL employees Hemantha Dep, Gayan Bandara, Chameera Eldeniya, Nuwan Kodikara together with Sanjeewa Padmakumara, Anura Kumara from the ANCL’s advertising division.

A UK Graduate in New Media:

Madhuka, a UK graduate in New Media had left his job in the UK to work in Sri Lanka on an invitation extended by the former government. He had worked at the Rupavahini Corporation (SLRC) and a number of other media institutions before being appointed as the Editor of Digital and New Media at ANCL.

Following the defeat of the ‘Yahapalana’ (Good Governance) government on November 16, Madhuka had tendered his resignation on November 18 to the Lake House authorities.

However, according to ANC policies, Madhuka is required to work till December 31 when his resignation will become official. Therefore, Madhuka had come to Lake House as usual.

While Madhuka was at the ‘Resa’ newspaper editorial, a group of thugs had barged into the office had dragged him out leading to a rest room area which had no functioning CCTV cameras and beaten him. While attacking him, the thugs had apparently said “There is no point telling you, this is the way you must be spoken to” and threatened to kill him if he visits Lake House again.

CCTV footage captured how Madhuka was being dragged to the restroom area. According to sources, Madhuka had undergone an open heart bypass surgery and is a heart patient.

The attack had not only scared him but has caused his health condition to worsen. He has complained to the Fort Police station about the attack and submitted a written complaint to Lake House General Manager Abhaya Amaradasa. However, none of the suspects have been arrested yet.

After the recent change of government, a systematic oppression of the media has been on ongoing.

Following the Presidential election on November 26, Police and a group of men in civilian attire had visited the office of newshub.lk with an expired search warrant and gone on to check the computers of the office.

Following this, based on a complaint by a Sinhala organisation to the IGP, an investigation was commenced by the CID’s cyber crimes division which summoned the Editor of Voicetube.lk, Thushara Witharana to the CID on November 28 to obtain a statement from her. She was questioned for over 6 hours.

While she was not informed of the exact reason for being summoned, the same unit on November 26 had called on journalist and attorney-at-law Sanjaya Dhanushka, who presented the alternative news cast for The Leader TV for questioning. He was grilled for over 8 hours on the day.

Self Censorship by Media!

In a political commentary in ‘Anidda’ written by Prof. Jayadeva Uyangoda, he states that;

“It is not a pleasure for a political commentator to impose self censorship. But will I be imprisoned if I write according to my conscience? Will I be abducted and be made to disappear? Will I have to provide a statement to the Police? Will unknown men on motorcycles circle my home? Has the time for political commentary without fear, restraint and doubt ended? These uncertainties are not my own but I believe are haunting other journalists in this country as well.

However, what is most unfortunate is that while media personnel and organisations are being attacked the opposition has continued to stay silent.”