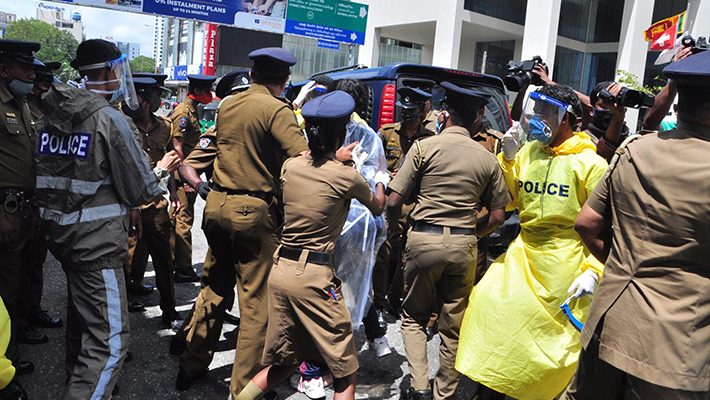 The Free Media Movement strongly condemns the unlawful means undertaken by the police to arrest leaders of organizations and trade unions who have been campaigning for public issues affecting the people and for their trade union concerns. This unlawful act only serves to stifle public dissent on issues affecting them by instilling a wave of fear in the country.

The opposition leader visited the Harbour Police to see the 44 people, including 36 teachers, detained after being arrested on their return from a protest regarding their salary anomalies in Colombo on 4th August. However, the opposition leader has been denied the opportunity to meet them.

The arrested group of protesters were produced before the Fort Magistrate’s Court on 5th August and released on personal bail. The court has rejected the request by the police to conduct PCR investigations on those who were arrested.

The latest incident in a series of apprehensions is the arrest of Wasantha Mudalige, the convener of the Inter-University Students Federation (IUSF), who was involved in the protest on Parliament Road against the Kotelawala University Bill on 3rd August. He was returning early morning on 6th August after a discussion on Sirasa TV aired on 5th August, when two men in plain clothes arrested him.

Due to the intense questioning of the student, a uniformed police officer had subsequently intervened. In addition, student activists Chameera Koswatte and Koshila Hansamali, who were involved in the protests, have also been arrested. In contrast, Amila Sandeepa, the Jayewardenepura University Students’ Union president, has been forcibly taken away and arrested. Meanwhile, Lecturer Amanda Lakmal has released a video on social media regarding an attempt to arrest an unknown person by a group dressed in civilian clothes who had boarded a bus that protesters against the Kotelawala Bill were travelling.

Although the country is currently faced with the raging Covid-19 pandemic, the Free Media Movement considers the suppression of protests demanding solutions to issues affecting the people and the arrest of activists who lead them is a violation of the freedom of speech and expression.

The Free Media Movement would like to emphasize to the police that the provisions contained in the Constitution state that respecting the right to freedom of expression is the responsibility of every public servant.

It is no secret to the public that the police, who turn a blind eye to government politicians and their supporters who violate quarantine laws, adopt a stringent policy of arresting protesters who advocate and protest regarding the issues affecting them and the public.

Therefore, the Free Media Movement emphasizes that the solution to the problems of the public should not be pursued by the suppression of opinions under the guise of quarantine laws or by any other extra-judicial means. The Free Media Movement wishes to reiterate that the country will not benefit from repressive measures that terrorize the people.