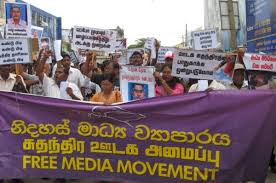 The Free Media Movement strongly condemns the attack on journalist Prasad Purnamal Jayamanne and the obstruction in carrying out his professional media activities.

According to the reports received, Prasad Purnamal Jayamanne who was photographing a protest by villagers against a tipper transporting sand in the Mukkuthoduwawa area in Madurankuliya, has been attacked by a person inside the tipper truck.

It is reported that Prasad Purnamal Jayamanne’s camera equipment has also been damaged as a result of the attack.

This particular incident, is an addition to a series of incidents that have been reported pertaining to obstructions faced by journalists in carrying out their professional duties and it appears to have become an element of the anti-social behaviour of certain sections amongst the Sri Lankan society.

The development of such a trend is extremely detrimental to the existence of a democratic society.

The Free Media Movement does not approve in any form the prevention or obstruction of journalists from reporting information correctly for citizens to make informed decisions.

The Free Media Movement strongly urges the authorities to deliver justice by bringing those who disrupt the professional activities of journalists before the law, and to strengthen the required landscape in the country to maintain a free media culture. and conductive environment.

Free Media Movement condemns the attack on media photographers and the obstruction of court correspondents.

The attention of the Free Media Movement is closely drawn towards the incident involving the obstruction and attack carried out by the police and opposition politicians’ activists against journalists involved in reporting on the arrest of Parliamentarian Patali Champika Ranawaka and strongly request the relevant authorities to investigate the incident thoroughly and to ensure that such incidents are not repeated.

The police have obstructed the journalists from engaging in their reporting activities on the night of December 18th when Parliamentarian Patali Champika Ranawaka was produced before the Colombo Magistrate’s Court and on the next day (19) the two photography journalists that went to report the MP being produced in courts were attacked by Manjula Perera, an activist of the United National Party.

One of the two Lake House photojournalists who was attacked has been hospitalized and receiving inpatient treatment while it is reported that the Keselwatte police have arrested the person responsible for the attack and are carrying out investigations.

The Free Media Movement calls for an investigation into these two incidents without political partisanship and to guarantee justice for the aggrieved journalists.

In both incidents it is the public’s right to correct information that has been restricted. This is not a situation that can be expected in a free and a democratic society.

The Free Media Movement strongly emphasizes that it is the responsibility of the government and the relevant authorities as well as all political forces including the opposition, to pay close attention to this situation and ensure that such incidents are not repeated.