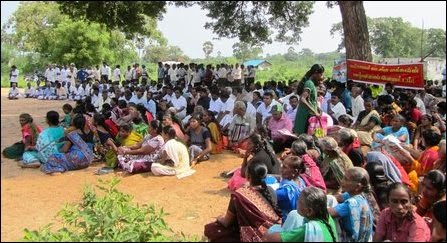 A resolution demanding an immediate end to the Sri Lankan government’s forcible acquisition of private lands in Valikamam, Jaffna, and the return of seized lands to their owners was passed unanimously at a meeting of the Jaffna District Coordinating Committee meeting on Monday.
Reflecting the intense public anger over the land seizures, the resolution tabled by the Tamil National Alliance (TNA) was supported by the Eelam People’s Democratic Party (EPDP, a key pro-government paramilitary group-cum-political party). However, the EPDP defended the government on other seizures also discussed, prompting criticism from those who attended the meeting.
“There was agreement on the issue of land acquisition at the meeting today, with the resolution I moved being unanimously adopted, after being seconded by Chandrakumar MP [of the EPDP],” TNA parliamentarian, M.A. Sumanthiran told Tamil Guardian shortly after the meeting ended.
“The resolution called for the acquisition process be abandoned, Section 2 Notices be withdrawn and the lands be handed back to the owners,” he added, referring to the legal ordnance under which the government is seizing private land.
Section 2 notices have been used to ‘make legal’ both the Sri Lankan military’s often decades-long occupation of private land taken over in multiple offensives against the LTTE, and further land grabs since the war’s end. Thousands of families displaced by the fighting have been unable to return to their homes and in many cases farms because of the military’s continued occupation.
The five hour meeting on Monday was jointly chaired by the Chief Minister of the Northern Province, C.V. Wigneswaran, of the TNA and the EPDP leader, Douglas Devananda (pictured left and centre above, respectively). It was also attended by TNA parliamentarians Maavai Senathirajah, Suresh Premachandran, S. Sritharan. Military and police officials were also in attendance.
Several other matters related to the military’s acquisition of land were intensely debated, such as the need to reopen the Palali teaching centre, which has been under Sri Lanka army’s control for two decades.
The teaching centre is currently functioning at a temporary location in Tirunalveli with only English classes taking place. Military moves to construct a permanent base on the Palali premises were actively opposed by the Ceylon Tamil Teachers Union in 2012.
On Monday, despite the agreement on the resolution on land seizures, a resolution tabled by the TNA’s Premachandran, demanding the reopening of the Palali teaching centre under local government control, was fiercely opposed by the EPDP leader Devananda, who argued it was a matter for the government in Colombo.
“Even as we are trying to fight for the people’s rights, [Devananda] is supporting the government. It is despicable,” a local TNA official who attended the meeting told Tamil Guardian.
Speaking on condition of anonymity, citing risks to his safety from the EPDP’s army-backed paramilitaries, he said: “despite claiming to be a Tamil representative, [Devananda] is supporting the government in taking away the Tamil people’s lands and property. It is a betrayal.”
Whilst Monday’s resolution on land grabs gives voice to long simmering public anger, the Sri Lankan government will simply ignore it, the TNA Vice Chairman of the Valikaamam North Pradeshiya Saba, Sanmugalingam Shageevan, said.
“The government will not give the lands back, they have no will to do this,” Mr. Shageevan told Tamil Guardian on Monday.
“They are taking the land in order to permanently base the military into Jaffna, so they are not going to give it back to the people,” he said further.
“The only hope is that the international community will put pressure on the government and force them to hand it over,” he said, echoing previous pleas by Chief Minister Wigneswaran.
The next Jaffna District Coordinating Committee meeting is to take place on May 26.