Sri Lanka: End the violations of scientific prioritization of vaccination roll out before it is too late – AMS warns authorities 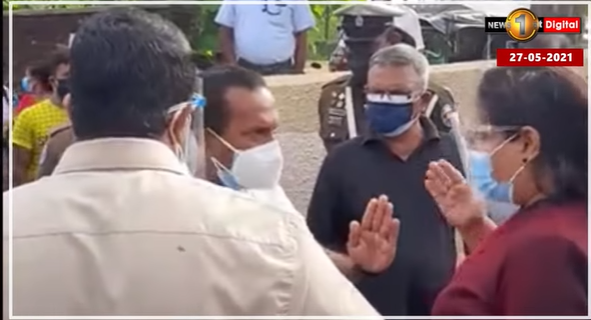 Image: Ruling party politician, chairman of the Moratuwa UC threatens lady doctor saying only his list of people should be given the vaccine.

Covid-19 vaccine roll out in Sri Lanka – What are we doing and who is responsible for the current mess? Asks Association of Medical Specialists.

We have witnessed the COVID vaccination program taking another dramatic turn yesterday to display thuggery of the Mayor of Moratuwa Urban council.

While saluting the Medical officer of health (MOH) for her courage and forthrightness, we blame law enforcement authorities who failed to exercise their power to protect and
defend a high ranking public servant on duty in Moratuwa.

We have come to know about several such ugly acts of politicians in Kurunegala and Galle as well during this vaccine roll out.

We condemn such interference by any groups or individuals with political or trade union’s backing.

We as a professional trade union have very clearly predicted the chaotic situation which
could arise as a result of authorities losing the grip of the vaccination programme against Covid-19 at this critical juncture.

Any rational individual with common sense would know it’s detrimental effect on the success of the whole programme and hence on our economic recovery.

We urge authorities to introduce a clear and strict vaccine roll out plan even at this late
stage as this is the final rescue mission to put our programme on track to win the
confidence of the general public while successfully beating the pandemic.

In the absence of such a firm, organized plan we are bound to fail in achieving our goal.

Further, this kind of adhoc interferences by various groups violating scientific prioritization of vaccination roll out has already caused immense damage to our
“vaccination fame” internationally and our ability to purchase needy vaccines in the near future.

Therefore, we would like to warn relevant authorities that this would be the last
opportunity to intervene at the highest level to clear this mess to enable our front line
workers and the general public to get this important vaccine in a scientifically organized manner.

Moratuwa Mayor arrested for disrupting the duties of health workers
May 28, 2021
Moratuwa Mayor Samanlal Fernando has been arrested for behaving in an unruly manner during a COVID-19 vaccination drive organized in Moratumulla yesterday.

The Police said the Mayor was arrested after surrendering to the Mount Lavinia Police today.

He is accused of obstructing the duties of a medical officer engaged in the vaccination programme.

The Mayor is reported to have instructed the medical officer to inoculate those he had issued tokens to and not those who have gathered to obtain the vaccine. The Mayor is said to have issued the tokens to his close associates.

As the medical officer had refused to follow his orders, an argument had ensued between the two parties.

The female medical officer had thereafter filed a complaint at the Mount Lavinia Police against the Mayor, accusing him of making threats and obstructing her from carrying out her duties.

The Mount Lavinia Police had commenced investigations into the incident, following which the Mayor himself had surrendered to the Police.