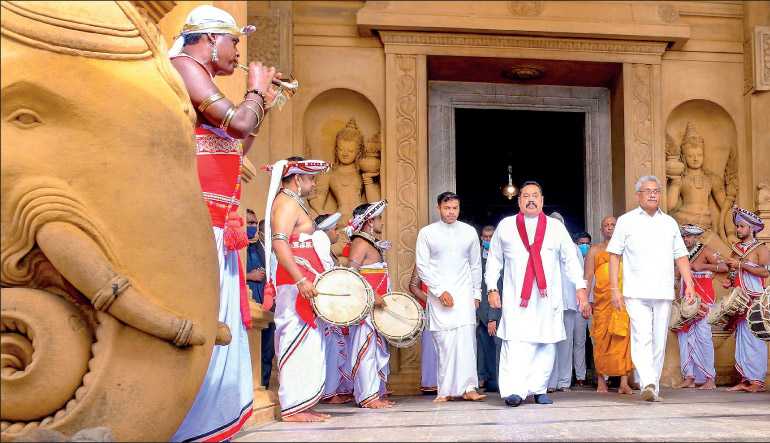 The victory of GR-MR-BR’s Podujana Peramuna was expected by almost everyone, but the margin of that victory, which is nearly a landslide, escaped everyone’s calculation. A post-mortem is pointless at this stage except to state the two obvious factors: Ranil Wickremesinghe and ultra-nationalism championed by ‘Cold War Monks’.

The former’s class consciousness, utter selfishness and policy bankruptcy not only threw out his government from power, but also destroyed his political party. At the same time, an ultra-nationalist intelligentsia backed by the clergy once again proved to be a powerful instrument to win elections. They succeeded in November 2019 and repeated the same in 2020.

With almost a two-third majority in the parliament (any slight shortfall in number would certainly be filled with opportunists from the opposition), will GR Presidency be able to create its much publicised “secure, disciplined, virtuous and lawful” society and achieve “prosperity and splendour”? There are three sets of obstacles that are going to make it hard to achieve.

Firstly, the issue of power sharing between the two centres of power, President and the Prime Minister, can turn into a running battle between the two siblings, GR and MR, and may even include the third, BR, and become an incessant family quarrel. This issue will be fought around the question of removing the 19th amendment from the constitution, on which GR has invested all hopes to realise his new vision.

Will the army disciplinarian GR win over a pompous politician MR? Or alternatively and pragmatically, will the amendment be left as it is and power would be shared between the two depending on the nature of the problem confronting from time to time? In any case, this victory with one family at the apex of power has opened a new and intriguing chapter in the working of constitutional democracy in Sri Lanka.

Secondly, the vision of “prosperity and splendour” depends entirely on the state and growth of the economy. Economic backslide started already during the former government but was accentuated, firstly by financial recklessness under GR’s presidency, and secondly by the economic cost of COVID-19. World Bank has already reclassified and downgraded Sri Lanka as a lower middle-income economy. It is going to be extremely painful and slow for the economy to get back to its pre-COVID-19 level, because of the global economic depression. To predict a V-shaped, U-shaped or dish-shaped upturn at present is no more than an academic exercise.

There are three areas in which the new government will struggle to arrest the economic backslide. Firstly, global economic depression has made Sri Lanka’s traditional export markets run dry and finding new ones to substitute them is almost impossible at this moment of time. Even to switch to a new range of exports as some pundits seem to advocate, demands additional inputs from abroad that will burden the nation’s meagre foreign reserves.

Secondly, the tourist industry, a lucrative foreign currency earner, has been hit hard by COVID-19, because of restrictions on international travel. The airline industry has no hope of getting back to its pre-COVID-19 level at least until 2024. Even then, unless a 100% successful vaccine is discovered the most travel-loving age group in rich countries would be reluctant to put their health at risk by touring in foreign destinations.

Thirdly, the Middle East labour market on whose remittances the country is heavily dependent for revenue has begun to throw out foreign workers in their hundreds of thousands. These returnees would add to an already swelling army of the effectively unemployed. In total therefore, if exports, tourist earnings and foreign remittances are dwindling, how in the world is the new government going to find financial resources to fund its vision of “prosperity and splendour”, except through borrowing? Here again, the country is already buried deep in debt.

This is where the third set of obstacles arises. If more and more borrowings are resorted to fund development projects the cost of such borrowing is going to be a lot more than just the burden of servicing the loans regularly and settling them eventually. The lenders, especially if they are foreign governments, are going to demand more than just the interest and the principal. Already the country has given its Hambantota Harbour to the Chinese on a 99-year-lease. Arrangements are afoot for a currency swap deal with India. Why is that deal still not finalised? Is there another piece of real asset involved in the negotiation? The same question could be asked about negotiation with US over the Millennium Challenge Corporation. Beggars obviously cannot be choosy.

The way Sri Lanka has been trapped within the vortex of Indian Ocean geopolitics is the price the country is forced to pay for its foolhardy civil war. Sri Lanka cannot avoid its territorial sovereignty becoming a bargaining chip when negotiating for aid or loans from donors and lenders. Ultranationalists may disagree with this statement, but future will be the final judge.

All these difficulties will compound to make economic life unbearable to most ordinary Sri Lankans, including those who voted for this government. The next budget or the one after that will have to implement tighter measures to increase government revenue. This means, taxes will have to go up, imports restricted, and public expenditure cut down or become severely selective. Welfare expenditure, especially on education and public health, which require immediate attention, will suffer as a result.

All this will be reflected in rising cost of living. Poverty and income disparity will dominate public agitation and economic discontent may force the government become more authoritarian. In short, without surplus budgets, and surplus in balance of payments economic development is going to be a hard struggle. Electoral landslide cannot arrest economic backslide. Cold war monks may win elections but cannot develop an economy.

At least one thing can reduce quite substantially the mounting pressure of economic difficulties, and that is forging national unity through reconciliation. Reconciliation is a foundation for economic development and not the other way round as the President seems to think. Ultranationalist intelligentsia and cold war monks may work to block any attempt at reconciliation, but their determination will only cause economic ruin. Whether these elements could be overruled by saner minds within the government, one has to wait and see. But without reconciliation and unity on the one hand and with mounting economic difficulties and external pressure on the other extremism can raise its ugly head. Of course, security could be strengthened, but that also requires additional resource.

Finally, noting the fact that the total volume of votes polled by SLPP has remained almost static since the Presidential Election, the near landslide in terms of seats should not be translated into increased popular support to the government.

The opposition remains multi-fractured but not weakened in total. This means the government’s electoral fortress is not impregnable. The economy will remain the number one enemy of GR and his MR government. His “secure, disciplined, virtuous and lawful” society, and vision for “prosperity and splendour” will unfortunately remain a mirage unless some unexpected and fortuitous circumstance make it a reality.