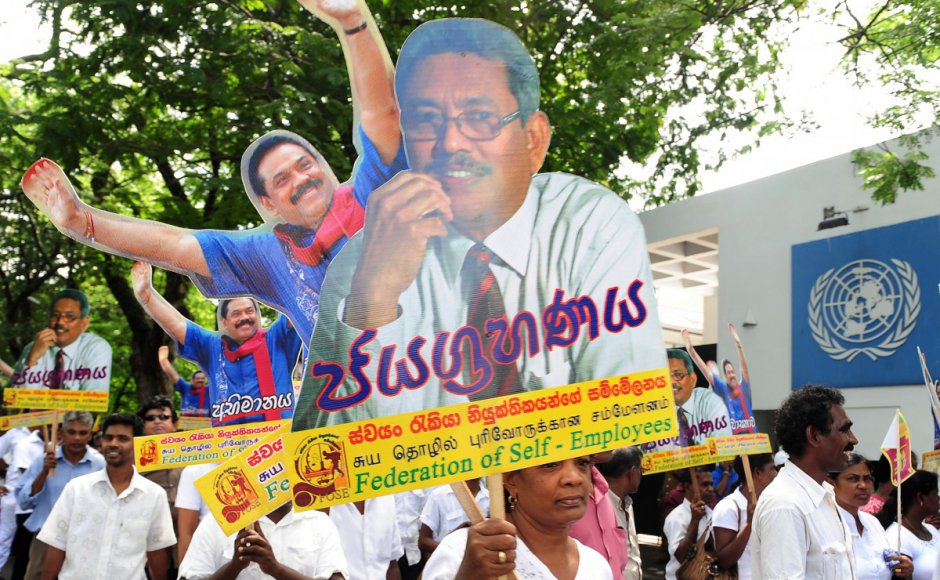 SHOULD Tamils boycott Sri Lanka’s elections in November for the executive presidency?

This question is weighed by Tamils as the leading candidates for the forthcoming polls are unwilling to meet the demands and aspirations of Tamil voters.

However, a boycott alone would be ineffective for Tamils to achieve their political goals of power-sharing, accountability and demilitarisation, unless it becomes part of a larger post-election campaign, where Tamil parties amplify the boycott message by joining and enhancing other types of extra-parliamentary agitation already in progress.

A boycott will be a logical next step for Tamils, building on their actions taken at the last two presidential elections following the end of the civil war in 2009 with the military defeat of the rebel Tamil Tigers.

In 2010, they voted for Field Marshal Sarath Fonseka although he was an army commander instrumental in slaughtering Tamil civilians. This was a protest vote against President Mahinda Rajapaksa, accused of war crimes, who was seeking a second term. The logic was that the instrument of violence was better than the author when there were only two choices. The choice did not help Tamils because Rajapaksa won and continued oppressing Tamils.

At the January 2015 presidential election, Tamils supported Maithripala Sirisena, despite him being defence minister when war crimes occurred. They were goaded into doing so by the largest Tamil political party in parliament, the Tamil National Alliance (TNA). The TNA supported the Sirisena’s platform of good governance.

But there has not been a new Constitution. One reason was infighting within the NUG. The other was that Sirisena and his prime minister, Ranil Wickremesinghe, have insisted that devolution of power would not exceed what is possible within a unitary state, which is already in place under the 13th Amendment to the constitution.

During negotiations for a new Constitution, the TNA agreed to this as a compromise despite their 2015 manifesto promising Tamils a federal state.

The NUG also failed to meet another demand of the Tamils – accountability.

Sirisena and Wickremesinghe repeatedly said military personnel accused of war crimes and crimes against humanity would not be subjected to an international independent investigation. They refused rescinding the draconian Prevention of Terrorism Act. The NUG established an office of missing persons in contravention to the wishes of the Tamil survivors and continued terrorising and oppressing majority Tamil-speaking northern and eastern provinces of the country with the military.

Therefore, failures by Sinhala presidents and their administrations after 2010 have spurred Tamils in 2019 to mull boycotting the next presidential election as a step forward in pressing their demands.

But the boycott is more than a denunciation of past failures; it is a prognosis of the future. The frontrunners contesting the 2019 elections – all of them Sinhalese – are yet to make their election manifestos public, but their statements hitherto do not approximate Tamil demands for federalism, accountability or demilitarisation.

Gotabaya Rajapaksa, the former defence secretary, atop the military command during the civil war is accused of war crimes. He is the nominee of the Sri Lanka Podujana Peramuna.

He projects himself as a “strongman” who would keep Sri Lanka safe but has only an indifferent message to Tamils.” His spokesman has said, “Our campaign has no special plans to attract minority votes.”

Gotabaya Rajapaksa’s most prominent rival Sajith Premadasa from the United National Front coalition has reiterated he is for “maximum devolution within a united and indivisible state.”

But that is vague. There is no indication his plan will devolve more power than what is possible under the 13th Amendment, which Tamils have rejected as too meagre.

The third candidate is Anura Kumara Dissanayake of the National Peoples’ Power (NPP), another coalition. He is yet to articulate a detailed position of power sharing with the Tamils. Dissanayake’s party has not been big on devolution of power, preferring instead to profess equality of all communities within a united Sri Lanka.

All three candidates are also not expected to enhance accountability or demilitarisation because that could imperil their Sinhala support base.

Despite the candidates’ unimaginative pronouncements on power-sharing and other issues, a boycott would not help if it only serves as a symbol of Tamil frustration and defiance. Because the consequences of a boycott would be the election of a president who believes that he was chosen without Tamil votes. That would not only make him pay mere lip service to demands of the Tamils as it is done now but give him a freehand to actively retaliate against them.

Meanwhile, the TNA has been pressing for the abolishing of the presidency in favour of a Westminster-style governing structure.

But in today’s political context it is inconceivable that the Sinhala Buddhist elite that run Sri Lanka will want to sacrifice the favourable power dynamics they enjoy in the presidential form of government, even if a parliamentary form of government is established as the TNA wants. Parliament will use huge Sinhala majorities to oppress Tamils and Muslims.

It is because Tamil leaders realised soon after independence in 1948 that a central-government institution – presidency and parliament – would be chary to share power with the Tamils and Muslims that they demanded federalism. Federal power-sharing would allow these territorially concentrated populations in northern and eastern Sri Lanka to have relative autonomy to manage their internal affairs.

Supporters carry placards with a picture of Sri Lanka’s Housing Minister Sajith Premadasa in Colombo on October 7, 2019, after filing his nomination papers to the Election Commission to contest the upcoming presidential election. Source: LAKRUWAN WANNIARACHCHI / AFP

In this light, a boycott of forthcoming elections by Tamils will have little benefit if Tamil political leaders behave as if their power is derived from holding on to the coattails of Sinhala government leaders both in parliament and the presidency.

The truth is that Tamil parliamentarians were elected by the Tamil voter and it is from them that they derive power.

In the post-2015 parliament, the Tamil leadership has believed its best bet is devising manoeuvres that might get them “concessions” from Sinhala leaders. And tired of waiting for relief, sections of the Tamil electorate have taken matters into their own hands. Families of the disappeared, landowners demanding the military to return their land and arbitrarily incarcerated political prisoners have been undertaking protests and civil disobedience campaigns for more than two years.

The TNA, the largest party in Parliament, is aware that protesting mothers of the disappeared have been demanding a list of persons in government prisons.

Although the TNA has written to Sirisena asking the list be made public, the party has declined to use the enormous parliamentary tools at its disposal to put maximum pressure on the government to procure the lists. Nor have other Tamil parties helped protestors.

The Tamil Peoples’ Council leader C. V. Wigneswaran speaks about a “non-violent struggle for justice,” but neglects visiting the protesting victims, while the Tamil National People’s Front seems to believe that organising an occasional demonstration by families for the cameras is all it needs to do for the protestors.

Despite indifferent Tamil politicians who do not help protestors to receive the national spotlight or bring their issues to the forefront for discussion, direct action by civil groups, mostly led by women, have continued.

The impact of their protests is evident by the government-instigated goons and thugs sent to injure protest leaders in Mullaitivu and Batticaloa and threaten a delegation of mothers of the disappeared who went to the UN Human Rights Council in Geneva.

This does not mean that Tamil politicians should boycott parliament if elected. But merely articulating demands within formal governing institutions is clearly inadequate.

Hence, Tamil politicians should combine parliamentary and extra parliamentary methods much in the line of the Ilankai Thamil Arasu Katchi (Federal Party) of the 1950s and ’60s. The Federal Party at least negotiated successfully with the Sinhala governments to commit to their demands in pacts until Sinhala chauvinism forced it to demand secession in 1976.

Boycott of elections is a weapon in the armoury of non-violent agitation in countries where formal channels to articulate political grievances are broken.

But if Tamils want the boycott not to be a one-off event, they should persuade Tamil political leadership not to leave extra-parliamentary agitation only to survivors but join this struggle to add and build on it.