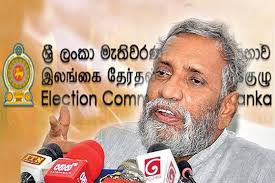 Sri Lanka’s election commission chief on Sunday backed down from plans to censor a state-owned TV station following criticism that his actions were supporting the main opposition candidate at this month’s presidential polls.

In a surprise move, commission chairman Mahinda Deshapriya had banned any political programing on the Independent Television Network (ITN) after accusing the channel of harming the campaign of frontrunner Gotabhaya Rajapakse.

“After considering many representations by several parties that my order was discriminatory, I revoke the (censorship) order issued on ITN,” Deshapriya said in a letter to the broadcaster, seen by AFP.

The censorship order, which had been due to come into effect midnight Sunday, came after ITN aired a programme alleging loyalists to the previous regime thwarted a corruption probe into strongman ex-president Mahinda Rajapakse’s family.

Independent poll-monitoring group the People’s Action for Free and Fair Elections (PAFFREL) said privately-owned TV stations were worse than ITN in violating campaign laws and in supporting one candidate over others.

“We have always maintained that it is discriminatory to target only state-run media because the bigger offenders are the private channels,” PAFFREL chief Rohana Hettiarachchi told AFP.

He said his organisation was instead calling for the strict implementation of campaign rules on all media outlets.

“They are all using frequencies which belong to all people of this country,” he said.

“Therefore all have a responsibility to provide balanced coverage without breaking campaign laws.”

The censorship ordered by Deshapriya on ITN applied to live coverage of any event. It was the first time a Sri Lankan election chief has ordered censorship of a TV station.

Official sources said the unprecedented media ban also caused friction within the three-member Election Commission, with at least one commissioner openly challenging Deshapriya and accusing him of acting arbitrarily.

“The correct thing would have been to impose heavy fines for violations… whether by private or state media.”

The commission last week said it received many complaints about other channels campaigning for Rajapakse without declaring their bias, but could not take action as they were all private networks.

Gotabhaya Rajapakse was defence secretary for a decade until his president brother Mahinda was voted out in 2015.

The opposition candidate is the current favourite, even though his bid is widely seen as a front to get Mahinda — barred from contesting the election because of a two-term limit — back into power.

Mahinda’s rule was marked by the end of a bloody civil war against ethnic Tamil rebels, and an international outcry over alleged human rights violations by Sri Lankan troops.

The election has attracted a record 35 candidates, with nearly 16 million people eligible to vote.

Last week, the commission said it was working with Facebook to take down posts that defamed election candidates.