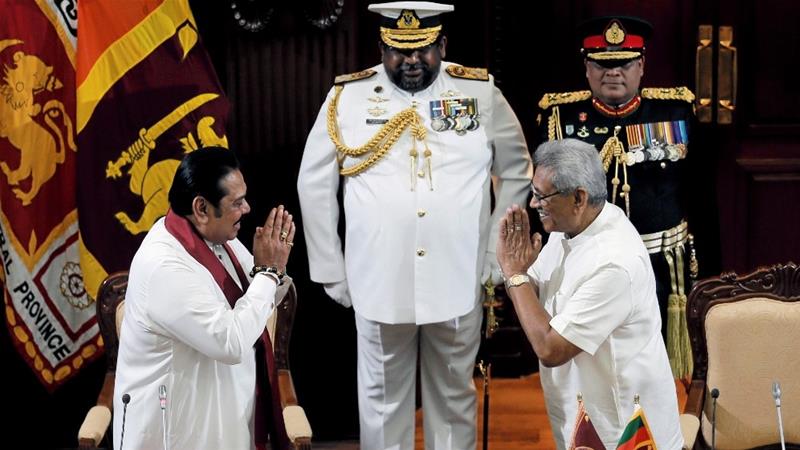 President Gotabaya’s handling of the coronavirus pandemic has won his government high-praise in the Indian Ocean Island. Only 11 people have died due to COVID-19, the disease caused by the virus, with the country recording nearly 3,000 infections since March.

At least four members of Rajapaksa family have found a place in the Cabinet, including President Gotabaya’s elder brother and former two-time president, Mahinda Rajapaksa, who was sworn in as prime minister – a post he has been holding in a caretaker capacity since November, at a sacred Buddhist temple in Colombo.

The new cabinet of ministers was sworn in at the nation’s most sacred Buddhist site, the Temple of the Tooth in the city of Kandy in the central highlands, to appease the Buddhist Sinhala support base of the SLPP.

Immediately after the election results, SLPP’s chairman Professor GL Peiris said that a majority of voters had given them a complete mandate to amend the Constitution.

In 2015, a constitutional amendment by the previous government curtailed the powers of Sri Lanka’s executive presidency and mandated parliamentary oversight of executive power.

But President Gotabaya has said that it has caused dysfunctional governance and limited progress.

Kusal Perera, a political analyst based in Colombo, claimed that since his appointment, President Gotabaya has violated the Constitution on multiple occasions.

“For instance, when the cabinet was appointed on August 13, the President – who cannot hold ministerial office under the current constitution – kept the defence ministry portfolio anyway,” Kusal said.

“But no one is challenging it,” Kusal pointed out, adding that people had simply applauded and accepted the violations made to the Constitution by the new president.

“The 19th amendment was not accepted in society from day one. People in the larger majority, the Sinhala Buddhist constituency, wanted a stronger president who could stand up for the demands of society,” he told Al Jazeera.

The SLPP strategically aligned their political campaign to cater to the country’s majority Sinhala Buddhists that make up to about 70 percent of the population.

Sri Lankan constitutional law expert Asanga Welikala said now the Sri Lankan state would be identified much more closely with the Sinhala Buddhist identity and the minorities will have to acknowledge who is “supreme”.

“SLPP’s idea of what minority rights are is much different to what the minority groups think their rights are,” he said, “It is not based on human rights or equality or commitments to diversity, but based on whether they [minorities] are with them or not.”

The handling of the attacks by the previous government angered Sri Lankans who turned back to the Rajapaksa dynasty.

Rights activists fear the Rajapaksa brothers’ victory does not bode well for the country’s minorities and political opponents.

Discrimination against Muslims
Gotabaya administration has been criticised for using the pandemic to discriminate against minorities, particularly Muslims. The government made cremation mandatory for all coronavirus-related deaths, disregarding Muslim funeral practices.

The vice president of the Muslim Council of Sri Lanka, Hilmy Ahamed, who was one of the litigants against the mandatory cremation policy said he was confident that the government will now address the issues of the Muslim community.

“We will have to give the hateful rhetoric against Muslims that was used during the election campaign some time to settle down,” he said, adding that the Muslim community also voted in large numbers for the SLPP.

The election also saw the weakening of traditional Tamil parties in the country’s formerly embattled Tamil-majority Northern Province, where the ruling alliance increased its tally.

The comeback of Rajapaksa will also dash the hopes of the transitional justice and reconciliation for the Tamil community. More than a decade after the end of the war, heavy military presence remains in the Northern and Eastern provinces.

There is serious worry [among the Tamils in Northern and Eastern province] of what kind of constitutional refColombo, Sri Lanka – The Rajapaksa family romped to victory in the August 5 Sri Lankan parliamentary elections capitalising on popular appetite for strong government, a fragmented opposition and a long-drawn campaign focused on Sinhala Buddhist nationalist ideology.

The Sri Lanka Podujana Peramuna (SLPP) party won 146 seats just four short of the supermajority it needs to change the Constitution – one of the governing party’s main campaign promises.

Critics fear the planned constitutional reform will lead to authoritarianism, as it will amass more power in the hands of President Gotabaya Rajapaksa, who has cracked down on journalists and political dissent since taking office in November.

Nearly 60 percent of the Sri Lankans reposed their faith in the Rajapaksa family in an election held amid strict public health measures due to the coronavirus pandemic.

“There is serious worry [among the Tamils in Northern and Eastern province] of what kind of constitutional reforms will be brought about,” political economist Ahilan Kadirgamar told Al Jazeera.

“They are also concerned about how much the concerns of the minority community will be considered by the new government. If there will be attacks in the future,” said Ahilan, who is based in Jaffna, the capital of Northern Province.

Rights groups warned that, since Gotabaya took office in November, the government has been accused of suppressing dissent and activism, with journalists subjected to police interrogations, and faced arrest or trumped-up charges.

Sandya Ekneligoda, wife of the missing journalist Prageeth Ekneligoda, who disappeared 10 years ago, said that the journalists who spoke to her before have stopped talking to her after the Rajapaksas came back to power.

“Human Rights is a meaningless subject for this regime. They created unnecessary fear among the public and now the public also resents campaign for justice for crimes and human rights abuses,” she told Al Jazeera.

“I never stopped looking for justice for my husband, but I see that the media got scared. Journalists have stopped talking to me,” she said.

The new government’s tenure, however, will not be a walk in the park. It inherited a failing economy that was worsened by the COVID-19 pandemic. Economists predicted that a major financial crisis would only be averted if the government can obtain funding as it has to repay billions in dollars of foreign debt.

“The government’s debt repayment is $4.5bn each year until 2024. In total, we will have to repay an external debt of $30bn during this period,” senior economist W A Wijewardena told Al Jazeera.

The Easter Sunday attacks in 2019 and outbreak of COVID-19 this year badly affected the country’s tourism industry, one of the largest foreign exchange earners.

Sri Lanka’s external debt crisis has been long-running, set off by a spate of borrowing during the decade (2005-2015) that Mahinda held the office of president. His government borrowed heavily from China at high interest rates to build a port, an airport, cricket stadium and other vanity projects that have returned no economic dividend for nearly a decade.

“The previous Good Governance government led by President Mathripala Sirisena could not reverse the trend. During their period, the situation worsened,” said the senior economist.

Now, President Gotabaya has announced plans to recruit 50,000 graduates and 100,000 more from the low-income families to the public service, despite the lack of government fund.

“All the odds are against this government,” said Wijewardena, adding it will now have to reverse the trend [the falling of the economy] within a short period of time.