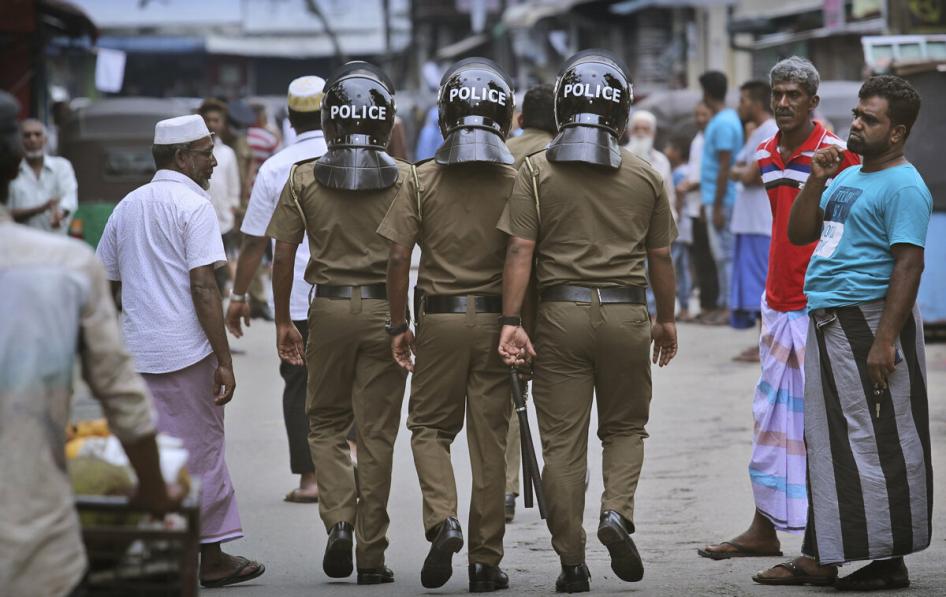 On April 14, 2020, the authorities arrested Hejaaz Hizbullah, a prominent lawyer, apparently under the draconian Prevention of Terrorism Act. He was one of six people, including the brother of a former minister and a customs official, whom police recently detained for their alleged involvement in the 2019 Easter Sunday bombings by an Islamist group, which killed over 250 people. Ramzy Razeek, a retired government official who has a following on Facebook, was arrested on April 9 after decrying religious discrimination in a social media post.

“Sri Lankan authorities have a responsibility to prosecute those responsible for the horrific Easter Sunday attacks last year, but the arrests should be lawful, and not used to vilify an entire community,” said Meenakshi Ganguly, South Asia director. “The recent arrests of well-known Muslims, combined with biased government actions and rising anti-Muslim hate speech, raise concerns for the broader safety of the Muslim community.”

Concerns for the safety and security of Sri Lanka’s Muslim community after the Easter bombings have increased since the outbreak of Covid-19. On April 12, Sri Lankan Muslim organizations wrote to the inspector general of police reporting an upsurge in hate speech, including calls to boycott Muslim businesses and accusations that Muslims are deliberately spreading Covid-19. Senior government figures have made public remarks associating the Muslim community with Covid-19 infection.

Hizbullah has been legal counsel in a number of high-profile cases, including the challenge to the dissolution of parliament in 2018 and fundamental human rights cases. Police from the Criminal Investigation Department visited him at his home on April 14, where they handcuffed and questioned him, and later took him into custody. A habeas corpus petition brought on his behalf said the authorities searched Hizbullah’s legal office, opened files, and “perused his briefs and professional work related files.”

The police allege that Hizbullah was arrested in connection with the Easter bombings. He has been held in apparent violation of basic due process rights. Although he is believed to be detained under the draconian Prevention of Terrorism Act, no detention order has been served, and he was not taken before a magistrate within the required 72 hours. He has been denied regular access to a lawyer, except for brief meetings in the presence of the police on April 15 and 16.

The Bar Association of Sri Lanka and human rights advocates have raised concerns over the case.

Razeek, who regularly writes posts advocating harmony between Muslim and Buddhist communities, criticized a new government policy that requires cremating all victims of Covid-19, contrary to Islamic traditions. On April 2, Razeek wrote a Facebook post in Sinhala that stated: “Muslims have been surrounded on all sides by racist groups operating in the country.… It is time to prepare for an ideological jihad for the country and all its citizens, using the pen and keyboard as weapons.”

Razeek was arrested on April 9. His lawyer said that police detained him under the International Covenant on Civil and Political Rights Act for allegedly advocating hatred leading to incitement to hostility, discrimination, or violence. On April 22, Razeek’s custody was extended by a week.

The magistrate ordered that he be given access to medical treatment for existing serious health conditions, which had not yet been provided. Sri Lankan authorities should also ensure that Razeek has proper access to legal counsel.

The government’s position on mandatory cremation is contrary to World Health Organization guidelines and has been criticized by four United Nations special rapporteurs as a violation of freedom of religion. The special rapporteurs noted that Sri Lankan Muslims have been stigmatized and targeted with hate speech during the coronavirus pandemic.

“The threat that the coronavirus poses to all Sri Lankans provides the government with an opportunity to improve communal relations in the country,” Ganguly said. “To promote public safety, it’s important for the authorities to be seen as acting against discrimination, not promoting it.”