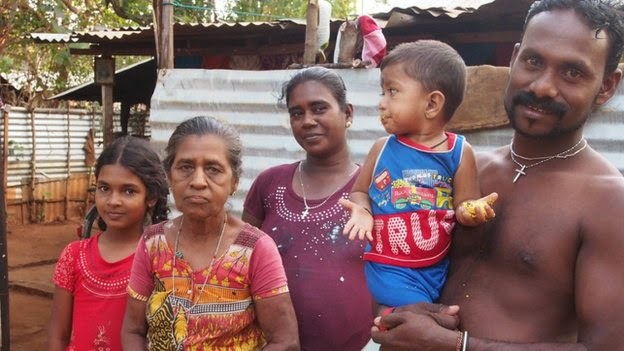 Charles Haviland BBC News, Jaffna district
“Would you like to go home?” The men chorus “Yes!” as my question is translated into Tamil. “We’re waiting for that date. There’s enough land. We’ll farm it. We’ll fish.”
They cannot do that here in the Konapalam camp, the cramped home to 240 displaced families where children play in the dust. There are 31,524 people still in camps around Jaffna in northern Sri Lanka because their land is held by the military.
Saharayani Thangarajah, a 42-year-old mother of two, wants to return to her birthplace at Kankesanthurai on the northernmost coast. “Some officials have told us we’ll be resettled by mid-April,” she says. “Is that true, do you know?”
She longs for normality because she has been through trauma – forced from her home in 1990 and then losing her father, brother and sister in the war that ended in 2009 with the final defeat of the Tamil Tiger rebels.
She would like her land back because she cannot stand this camp with its bad sanitation and mosquitoes. Dry food rations, once supplied by the authorities, stopped four years ago and no-one now runs the facility. Her husband sells fish but there are few earning opportunities. Her aunt, widowed in the violent climax to the war in 2009, recently arrived to live with them. 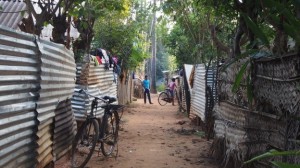 There are few earning opportunities for those living in the camps
‘Desert life’
Ten minutes away, Nadeswara College is holding its sports day in a field. Under the blazing sun, a rosette is pinned on me.
“On your marks, set, go!” issues from the megaphone as girls and boys run their races and win cups.
But this is a displaced school. It used to be at Kankesanthurai and had 2,000 pupils. In these makeshift premises it has fewer than 200. The corrugated-iron classrooms have little space.
The adults here are indignant. The military has established a resort hotel and farms in the 6,381-acre stretch of land it occupies and has set up similar facilities elsewhere in the north.
“I can go to their resort but I can’t go home,” says a former Nadeswara student, Krisnapillai Manoharan.
“We’re leading a desert life – we lost our homes, our land, everything,” adds an ex-teacher, BV Murugesu. Two mothers, who both live in IDP (Internally Displaced People) camps, say the school is not being invested in because of its supposedly temporary status. 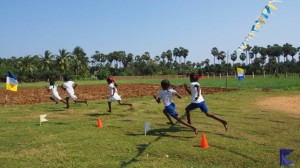 Student attendance at most displaced schools has fallen drastically
At the school rumours are circulating that the original Nadeswara College, abandoned in 1990, has now been demolished by the military. In his nearby office, the chairman of the local council, Somasundaram Sugeerthan, confirms this is true.
He shows me photos of bulldozers and flattened houses. His map indicates the main area held by the military, which swallowed up 72 villages, and other smaller military encampments. Eighteen schools had to close down. Seven have reopened elsewhere but are much smaller, as many families have moved away.
“Most displaced schools have shrunk from, say, 500 to just 75 or 100 students,” Mr Sugeerthan says.
Changed overnight
Yet he says there is also better news. One of the 18 displaced schools, Maviddapuram, is shortly to reopen on its original site, while the army – which is under a new commander in Jaffna – has released some land to its original owners.
Owners like Parameswaran Navaratnam, who takes me to see his plot of land by the sea, which has been newly restored to him and his seven siblings.
The air is heady with the scent of vegetation sprawling over the rubble. A lizard basks in the sun. There are remnants of wooden toys – and rusting weapons from the war. 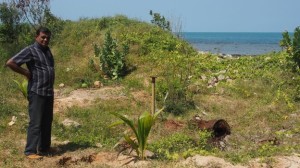 Mr Parameswaran managed to recover a silver heirloom before his house was demolished
“We used to enjoy the country life here,” says Mr Parameswaran, 52, who now lives in Jaffna town. “The kids used to push me into the sea. We did yoga on the beach. We would paint the coral and sell it to foreign tourists.”
That changed overnight in July 1987. State radio warned everyone to leave as Indian troops intervened in the spiralling war. “Half an hour after we fled, the navy attacked from the sea and the LTTE [Tamil Tigers] from inland,” he says.
Shortly afterwards the house was demolished and he managed to recover a silver cup, a gift from his grandfather, but nothing else.
Yet getting the land back has not been the new beginning he might have hoped. The family are not poor enough to qualify for new houses being funded by an Indian aid programme – but not wealthy enough to rebuild on their ancestral plot. So it remains barren and rubble-strewn.
Some are luckier: nearby are several homes built by the army on returned land.
Human rights campaigners and Tamil activists say only a small fraction of occupied land is being restored and that the army is trying to “colonise” the Tamil north with the military, whose members are Sinhalese. But the military says it has given back large tracts.
“We have released over 19,300 acres of private lands in the north and over 680 in the east,” says military spokesman Brig Ruwan Wanigasooriya. “We have also released over 2,500 acres of government lands in the north and over 3,200 in the east.” 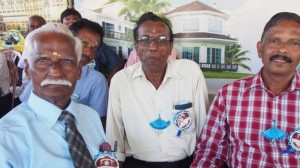 Former teacher Mr Murugesu, left, says he feels like he is leading a desert life
‘Pressure’
He says the main military zone, which includes Jaffna’s airport, has been reduced by about one half.
But what about those still displaced? The army commander in the region has made several recent promises to resettle them. Minister of Land Janaka Tennakoon tells the BBC he wants to restore more land and that the military in the north are being “very helpful” in this regard.
At the same time, though, the military is trying to get legal possession of some of the land it is holding in various parts of northern Sri Lanka. Two thousand people are now engaged in legal action at the Court of Appeal to try and regain their occupied land.
Back at the Konapalam camp, we are grabbed by a man who believes there is no serious intention to resettle the remaining displaced people. The father in his 50s utters a stream of grievances.
“The politicians have promised this before but nothing has happened,” he says. He believes the army’s continual requests for copies of land deeds are merely a game, and sharply criticises their behaviour. 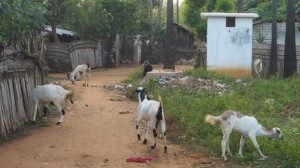 People living in the camps, who usually suffer from bad sanitary conditions, long for normality
“They watch when we talk to outsiders,” he says. “We can’t express ourselves freely. If we say anything to visitors the security forces come up afterwards and ask why we were talking to them. They put pressure on us.
“On our own land we could do different jobs – tapping toddy, fishing, masonry, daily labouring. Now it has all stopped.
“Our mistake was being born to a Tamil mother.”
As we chat, an army truck rolls by. There will clearly be no wholesale retreat by the military from the land it now holds: the government says it needs a military presence to prevent the resurgence of the Tamil Tigers.
“Like all other countries we too have military cantonments in identified places in all parts of the island in order to protect our national security interests,” says Brig Wanigasooriya.
Share
Facebook
Twitter
WhatsApp
Pinterest
Email