Sri Lanka: DG of the Media Centre for National Security has abused power to safeguard his secrete private life life and corruption 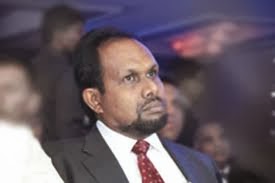 Another event of significant embarrassment to the UPFA Government was the sudden closure of the Media Centre for National Security (MCNS) retrospectively from November 1, thus evicting, unceremoniously, its Director General Lakshman Hulugalle. He was, however, adamant that his position still remains though the MCNS was wound up. The claim is similar to a chauffeur saying I am still the driver when his boss had sold the vehicle. There was only a two line terse announcement in a news alert of the Government – news.lk – about the closure.
It said: “Presidential Secretariat confirms Media Centre for National Security (MCNS) has been dissolved by the Defence Ministry with effect from November 1.” Presidential Spokesperson Mohan Samaranayake was also quoted by the local media making the same statement. Until last Tuesday when the announcement was made, it was business as usual at the MCNS. One UPFA source said the backdating to November 1 was to obviate the need to offer any tangible reason for the sudden closure. The MCNS was established on May 1, 2006 to disseminate information about the then ongoing separatist war. Despite the military defeat of Tiger guerrillas four and half years ago, the MCNS continued to play a proactive role disseminating information related to the armed forces, police and arranging related events including regular briefings for the media. Thus, its role remained relevant despite the end of the war.

The Sunday Times learnt that a sequence of events triggered by the sudden transfer orders to 23 officers and constables from the Police Department’s Organised Crimes Investigation Unit led to the closure of the MCNS. It came in the wake of the officers conducting a raid on a gaming centre in the Colombo Town Hall area. According to highly placed Police sources, the orders came even without a proper investigation being conducted against the 23 policemen. At least in one such instance, the sources pointed out, a Police Chief was ordered by the Supreme Court to revoke the transfer of a Sub Inspector who was OIC of the Weerambugedera Police Station (in the Kurunegala District) since no inquiry had been held before a transfer order was issued. The Police Chief involved was late W.B. Rajaguru whilst the Sub Inspector, now a UNP parliamentarian, is Range Bandara. Police Spokesperson Ajith Rohana had claimed that the transfer orders for the 23 police officers were routine and a new set of Police officers who replaced those transferred had carried out a second raid on the same gaming centre.

A UPFA source said MCNS Director General Lakshman Hulugalle urged the Police Chief N.K.Ilangakoon to effect the transfers on the grounds that there was ‘unfair’ treatment after the arrest of some persons closely associated with a leading personality.

Hulugalle, however, has denied he made any such request. The transfer orders had been signed by Senior DIG Gamini Navaratne on behalf of the Inspector General of Police. The issue was raised in Parliament by Janatha Vimukthi Peramuna (JVP) parliamentarian Anura Kumara Dissanayake. Noting that newspapers had reported that the MCNS had been dissolved from November 1, he asked whether it means that “only the crimes the Director General Lakshman Hulugalle committed after November 1 could be called crimes and wrong doing?” He asked how one would describe what he did prior to that date. Dissanayake said that the 23 policemen who raided the ‘Salaka Regino’ gambling den had been transferred to remote areas. The Police spokesperson has claimed it was because they had served more than a year in their current posts. He pointed out that Prime Minister D.M. Jayaratne had said they had been transferred due to their inefficiency. The Prime Minister had also told Parliament that he was not aware of a person by the name of “Hula.” Dissanayake said Hula is the name for the Director General of the MCNS. “What a crime for an official to use his powers to cover up his Casanova lifestyle,” asked the JVP parliamentarian. He was speaking during the committee stage of the Budget debate on the votes of the Ministry of Defence and Urban Development.

A related development came when Gamini Nethicumara, a leading businessman, granted an interview to a Sunday Sinhala weekly last week. The Sunday Times learnt that the interview came in the backdrop of representations Nethicumara made to the UPFA leadership over allegations against Hulugalle. Here are relevant excerpts:

“How did your wife get linked with the gambling business?

By this time the person known as ‘Hula’ and my wife had started an illegal affair. The person who most benefited was my sister-in-law. My sister-in-law who was angry with us got friendly with my wife and got her involved in the gambling business. Through ‘Hula’s’ influence the required security was provided.

“Do you have evidence that your wife had an illegal affair?

Who else will know this, other than me? I have sufficient evidence to prove this. I have the voice recording on the day of their honeymoon. You can listen to it (Plays the recording. Since it involves details of the private life of a third person we requested that it be switched off). I also have photographs.

“How long has this affair been?

It started at the end of 2011. The house turned to be a hell to my children and myself. My eldest daughter is married. The children lodged a complaint at the police. The police did not come to inquire into it.

It is because ‘Hula’ is a powerful person.

“If that is the case you could have divorced her?

“I have discussed this with the children and am doing this now. I tolerated as much as possible. Even if we had a simple argument at home about 50 policemen would come and surround our house immediately. Senior police officers used to come. Whenever this particular person (Hula) came home it was a disturbance to the neighbors as well. The Special Task Force and their Defender vehicles used to come and block the roads. It brought embarrassment to us. My children told ‘Hula’ not to come home. I also visited his office and told the same.

He stopped visiting home. But whenever he wanted he came and picked her and dropped her. A private security guard was deployed at my home without my permission. I was forced to take their permission to enter my own home. I believe it was state money which was being used.”

Nethicumara’s two children have made complaints to the National Child Protection Authority (NCPA). In addition, he had also made a complaint to the Cinnamon Gardens Police but has alleged that no action had been taken. It is only thereafter that Nethicumara had made representations to President Mahinda Rajapaksa himself.

Besides holding the position of Director General of the MCNS, Hulugalle also held a number of other appointments. It included the post of Deputy Chairman of the National Livestock Development Board (NLDB), a director of the Commercial Bank and a director of the NGO Secretariat. A senior official of the NLDB said yesterday that Hulugalle enjoyed a string of perks and drew substantial amounts of money for different reasons. This had included allowances to entertain VIPs when they were on provincial visits and expenses for travel abroad. He had also purchased a used Double Cab from a private party and had directed that no other vehicles be parked in the NLDB premises when he was present in his office at the NLDB with security escorts. The NLDB had spent more than Rs. 680,000 for printing a book titled Lakshman Hulugalle, a compilation of his experiences including his role as the Director General of MCNS.

This week, an STF security contingent assigned to Hulugalle was withdrawn. UPFA sources said that Hulugalle had now sought a diplomatic posting, preferably in Malaysia but his request had not been granted
ST