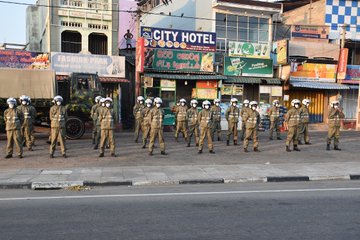 The International Network of Democracy for Sri Lanka (INSD), based in Germany with its membership world-wide, salutes the health services of Sri Lanka for their leading role in the fight against the Corona virus in the country. We also thank the government agencies and personnel who are providing essential services to the public at this critical juncture. We are also concerned about the health safety of all those engaged in the fight against the pandemic.

In this hour of uncertainty, we stand together with Sri Lankan people of all communities. Only by standing together can we overcome this difficult period.

At the same time, INSD as a network that focuses on democracy and human rights in Sri Lanka, expresses its serious concern about the arbitrary actions of the government of Sri Lanka in the guise of defeating the pandemic. It is very clear that a well-organized operation to suppress democracy and human rights is under way, under the cover of fighting the pandemic. Over the past few weeks, we have witnessed a number of violations of fundamental rights enshrined our the Constitution. There is an ongoing campaign to target dissenting voices and opposition opinions in Sri Lanka. INSD views these measures as serious threats to freedom of expression.

The police have arrested a social media activist, Ramzy Razeek, who has expressed his views against extremist ideologies his on his Face Book wall. It is reported that he has been arrested under the ICCPR Act, which is a legal instrument against hate speech. This is an example that shows that the government has begun to suppress dissent for narrow political gain.

We are shocked and surprised that the police have not made a single arrest against the real hate speech spreaders so far. Most of the hate propaganda, stemming from pro-government elements, is directed against ethnic and religious minorities and political opposition in the country. This behaviour of the Sri Lankan police reconfirms that discrimination against the minorities is a deep-rooted systemic evil in the country.

We are also concerned about the military-bureaucracy that is taking root in Sri Lanka. Instead of using available legal mechanisms such as the Disaster Management Act, the government has established a separate mechanism led by the Army Commander to face the pandemic. Today, Sri Lanka is under a curfew that does not have any legal basis. Military intelligence services have been assigned to track down COVID-19 contacts, thereby strengthening their hold on the population. The military is being projected, instead of health professionals who are doing an excellent job in difficult circumstances, as the leading force fighting COVID-19.

Particularly in the circumstances of this magnitude, the absence of Parliament that represents the sovereign people, does not augur well for the future of Sri Lanka’s democracy. The best course of action should have been to face the situation collectively, based on consensus reached in Parliament. Instead, the government has prioritized the politicization of the fight against the pandemic for its short-term political gains.

The unfolding events related to general elections that were scheduled to be held on 25 April poses an unprecedented rule of law crisis in the country. Parliament was dissolved prematurely by President Rajapaksa on 02 March 2020 while the threat of COVID-19 was looming. Now, the Election Commission has postponed the elections to 20 June due to the current situation. On 02 June, the three-months period during which governance can carried out without Parliament comes to an end. The President is adamant that he will not reconvene Parliament. We wish to emphasize that Parliament is not only a law-making body. It is the body to which the President is accountable. It is the body which has an oversight function over the executive. It is the body that controls public finance. With the judiciary unable to function as during normalcy, the executive is determined to govern the country alone. The President, although elected, cannot govern with Parliament and the judiciary both not functioning. This seriously undermines the concept of rule by Constitution. Needless to say, such rule amounts to authoritarian rule.

The emerging situation poses a grave threat to rule of law, democracy and human rights in Sri Lanka. INSD fully understands that extraordinary situations need extraordinary measures. This is truer in the fight against the COVID-19 pandemic. But that should not be a cover to undermine democratic governance and people’s fundamental rights enshrined in the Constitution of Sri Lanka.

Condemning in strongest terms the government’s anti-democratic approach to the emerging situation in Sri Lanka, INSD calls upon all democratic forces close ranks to fight the pandemic as well as efforts towards autocratic rule by the Rajapaksa family-led government.