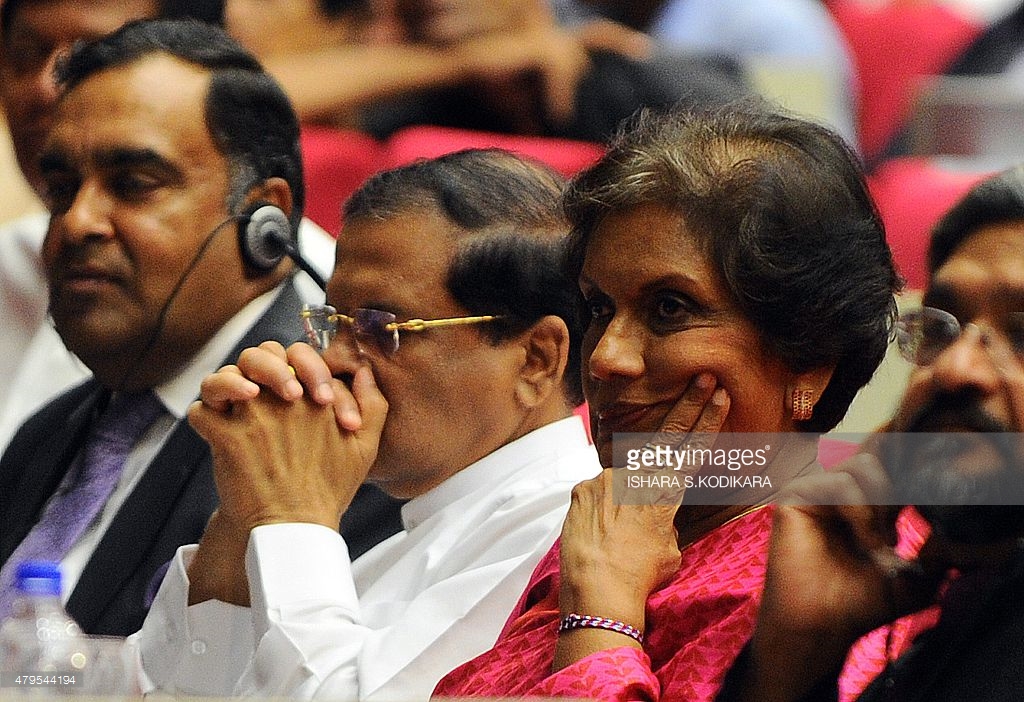 ( Sri Lankan President Maithripala Sirisena (2L), former president Chandrika Kumaratunga (2R) and India’s top envoy Y. K. Sinha (L) look on during a ceremony )
by Gagani Weerakoon.
President Maithripala Sirisena was the Chief Guest at an event, marking the 74th Birth Anniversary of the Ven. Maduluwawe Sobhitha Thera, organized by the All-Island Youth Abstinence Organization at the Sri Lanka Foundation Institute on 21 June.Individuals who have contributed significantly to the effort to eradicate the narcotics menace in the country were especially felicitated at the event. They included the Ven. Kuppiyawatte Bodhananda Thera, Inspector General of Police Pujith Jayasundara and Mrs. Chandra Hemachandra, who received awards from the President in recognition of their efforts. A book titled Amadyapa Hada – which basically elaborates on the vision and mission of the All-Island Youth Abstinence Organization for the next three years was presented to the President.

However, what grabbed the attention of all those who were at the event was that President Sirisena and former President Kumaratunga, who happened to be at his right hand throughout the 2015 presidential election and until not too long ago, were seen to be even avoiding eye contact with each other.
President Kumaratunga, at the end of the event, observed with some remorse that considering the enormity of the services rendered by the late Ven. Sobhitha, the gathering was a small one.

One might then ask whether all is not well!

Not only are the signs of camaraderie thawing between CBK and the President but one discerns a distancing away from the President by members of the civil society movement that was responsible for bringing the Yahapalanaya Government to power.

Recently, a group of 17 civil society activists [who backed President Sirisena at the 2015 January Presidential Election] held a closed-door meeting with President Sirisena and Prime Minister Wickremesinghe on 17 June, where the latter agreed to resolve issues which hinder the smooth and fast progress of investigations into large scale corruption, fraud and bribery allegations.

Though the focus of this meeting was to discuss Central Bank Governor Mahendran’s issue, one civil society representative at the meeting said former Minister Sajin Vaas Gunewardena is being given special protection in prison which is a highly questionable factor.

As he went ahead in this accusatory vein, President Sirisena lost his cool because it was clear to everyone present that the accuser was pointing his finger indirectly at the President.

The President immediately contacted IGP Pujith Jayasundara, who happened to have no clear idea about the allegation but did mention that arrangements had been made during his predecessor’s time to provide the former MP with MSD services.

Central Bank Governor Arjuna Mahendran informed the Monetary Board that he would not be seeking re-appointment as Governor of the Central Bank when his term finishes on 30 June. At the Monetary Board meeting, Mahendran said he would not seek re-appointment until the Committee on Public Enterprises (COPE) makes known its final opinion on issues related to the issuance of Treasury Bonds in the years 2015 and 2016, the Central Bank said in a statement.

On the other hand, Mahendran is pushing for the appointment of P. Samarasiri as Acting Governor, well informed sources claimed.

Those who were opposing the reappointment of Mahendran are up in arms once again against Samarasiri also, as they allege that he is also involved in the controversial bond issue in addition to not revealing details of the issues to COPE.

Samarasiri was appointed as a Deputy Governor of the Central Bank, with effect from 1 June 2014, by the Monetary Board, with the concurrence of the President and Minister of Finance.

The UNP turns 70 this September, and its leadership, which is looking at innovative ways to reach out to young voters, who could impact the long-term sustainability of the Party, launched the mobile application ‘UNP App’ that allows users to obtain electronic membership from the party for a sum of
Rs 20.

“I say to the youth, come join us and take the party forward. Our time is soon coming to an end, learn from our experience and take it forward from there,” UNP Leader Premier Wickremesinghe said at the launch.

As the UNP launched its e-membership drive, the Prime Minister recalled that former President J. R. Jayewardene had them selling membership cards at Rs 1 a card, from house to house, but today their app would have reached the people before the party cadres reach their homes.

The app launch coincided with former President Premadasa’s birthday and the Prime Minister explained that they would roll out similar new programmes until late President J.R. Jayewardene’s birth anniversary on 17 September.

This new development suggests that the UNP has begun sharpening its tools for a future election and has moved SLFP Parliamentarians to urge President Sirisena to launch the Party’s campaign as well.

“With the UNP apparently launching its pre-election membership drive early, in the wake of a few inter-Party hiccups with the SLFP, that also is seen as a sign that all’s not well between the unity partners.

Before long, President Sirisena could be cornered into a position in which he will be compelled to take a drastic decision,” political analysts say.

With SLFP Ministers on the warpath against the UNP for defending Mahendran, the UNP now threatens those trying to lampoon their Prime Minister with ‘consequences’.

They are in other words indirectly accusing the President of bringing in a speaker who attacked PM Wickremesinghe and a few others.

Earlier, the Lakshman Kadirgamar Institute is said to have turned down an application for use of its auditorium for a function.

Maithripala Sirisena was mentioned as the Chief Guest at this conference, that was organized by an official at the Presidential Secretariat. The Kadirgamar Institute, after receiving the approval, forwarded it to the Ministry of Foreign Affairs, under which the institute comes.

However, Minister of Foreign Affairs, Mangala Samaraweera, refused to grant permission after he read the list of speakers.

The reason was that on the list was the name of Dr. Dayan Jayatilleke. However, Mangala was not aware that this conference was being organized by the Presidential Secretariat. When Maithri was informed that Mangala had refused permission, the former gave instructions for the conference to be held at another venue. Thereafter, the BMICH was chosen to hold the conference.

Leader of the House, Minister Lakshman Kiriella, and Chief Opposition Whip JVP Leader Anura Kumara Dissanayake locked horns in Parliament, towards the latter part of the week, over COPE investigations into the Central Bank Treasury Bonds controversy.
A heated argument occurred between them when MP Dissanayake wrapped up his speech during the debate on the Right to Information Bill.

Kiriella, making a clarification on Dissanayake’s revelation on COPE findings, on Public Relations Officers and Advisors to the Minister, said during the period 2005-2015 there had been 190 such people appointed to the ministry by his predecessors.
“The investigations are not being held into the actions of the previous government. The COPE is probing current affairs but not the earlier issues. It should follow the sequence,” he said.

“If you are going to Chair a Committee with preconceived opinions, will it be fair? It is up to you to do it the way you want, I am just giving you an opinion,” Kiriella continued. At this point, Dissanayake, fuming at Kiriella said, “If you want to sit at the COPE and hear the cases, do so. If you want to appoint one of your members as the COPE Chairman, do it. If somebody is saying that Handunneti is unfit to hold the COPE Chairmanship because of that press conference he held a long time ago, we are ready to step down from that position. We don’t need to hang on to any position by force”.

“You came up with an opinion. What do you propose in this regard, if not the resignation of the COPE Chairman?” asked Dissanayake.

According to inside information, the Auditor General’s report on the Bond issue will be placed before COPE on 29 June.

It is also expected that members will discuss and decide whether Handunnetti should continue as COPE Chairman.
Intelligence warns

Meanwhile, by midweek, several alarming intelligence reports were handed over to President Sirisena.

According to information available, the reports included details about recent anti-government demonstrations in various core areas in the country on the VAT issue.

The reports have suggested the situation should not be taken lightly and have indicated the involvement of certain individuals and institutions in these hartals.
President Sirisena then ordered relevant authorities to expedite legal action against these individuals who are already being accused of various wrongdoings.
– Courtesy Ceylon Today
Share
Facebook
Twitter
WhatsApp
Pinterest
Email