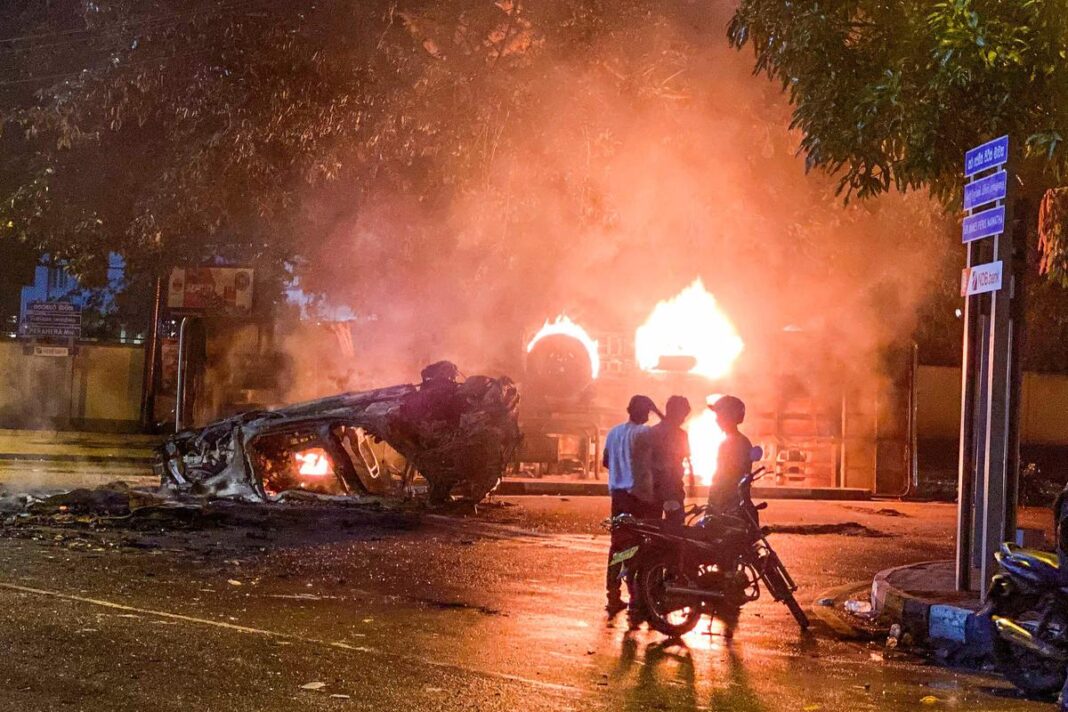 A vehicle belonging to the security personnel and a bus set alight is pictured near Sri Lanka’s outgoing Prime Minister Mahinda Rajapaksa’s official residence in Colombo May 9, 2022. | Photo Credit: AFP

Three persons died outside the capital in ensuing clashes, while at least 150 were injured in Colombo. Government MP Amarakeerthi Athukorala reportedly shot two people and then himself after being surrounded by a mob in the neighbouring Gampaha district, police told AFP. Homes of several ruling party lawmakers were torched, while some among anti-government protesters assaulted government supporters who turned up in Colombo, amid escalating violence on the streets.

After peaceful citizens’ protests for a month at Colombo’s seafront, and longer in other parts of the country, Sri Lanka descended into violence Monday morning, after several busloads of supporters of Mr. Mahinda came to Colombo amid speculation of his resignation. They chanted slogans praising their beleaguered leader who, along with his younger brother President Gotabaya Rajapaksa, is the target of anti-government protests in the island that is facing a grave economic crash, marked by acute food, fuel, and cooking gas shortages. The agitations intensified last week, in the wake of a worsening crisis for which demonstrators blame the ruling Rajapaksa brothers. Should the PM’s resignation be accepted by the President, the Cabinet will stand dissolved as per Sri Lanka’s Constitution.

Earlier, addressing supporters at Temple Trees, his official residence, Mr. Mahinda said he was “willing to make any sacrifice for the people of the country.” Soon after the meeting, the supporters were seen pulling down tents of protesters in front of Temple Trees, and they soon proceeded north towards the Presidential Secretariat where they demolished several tents, including one of St. John’s Ambulance, that have come up at the agitation site ‘Gota go gama’ or ‘Gota go village’. They torched a library set up in the area and injured several protesters.

A group of pro-government men pushed and continuously kicked activist Vimukthi De Silva, badly injuring her leg. She was at the spot to attend a discussion on the government’s environment policy — several talks have been held at the agitation site regularly — when the raging mob approached her.

“Are you a Tamil” Rajapaksa thugs asked an activist

“I was trying to stand far away and stream the attacks live on social media. They tried to pull away my phone. They asked me are you Tamil, don’t remember that he [Mahinda Rajapaksa] ended the war? How could you protest against him, and violently attacked me,” she said, hours later, with her right foot heavily bandaged. Video footage of men carrying poles and savagely assaulting young protesters went viral on Sri Lankan social media.

Both President Gotabaya and Prime Minister Mahinda condemned the violence on Twitter, only to be slammed by critics who held them directly responsible for the attacks that police failed to prevent or arrest, despite being present in large numbers.

Cricket star Kumar Sangakkara told Mr. Mahinda in a tweet: “The only violence was perpetrated by your “supporters” – goons and thugs who came to your office first before going on to assault the peaceful protestors.”

Former Speaker Karu Jayasuriya said in a tweet: “These thugs of the regime who attacked the peaceful protestors came to the Prime Minister’s residence on his invitation, and walked miles beating unarmed civilians. What was the police doing all that time? Is this what the President declared emergency regulations for?”

On Monday evening, massive crowds descended at Galle Face, the sea-side promenade in Colombo, defying the curfew, to express solidarity with the protesters. “We have come to support the young crowd who have sacrificed so much for our futures. If we don’t come today, when can we come?” asked Sriyan Jayawardena, a retired IT professional.

Rajapaksa  residence at  Madamulan on fire

A mob targeted the controversial Rajapaksa memorial monument in Medamulana, the ruling clan’s ancestral village of in the southern Hambantota district, and razed it to the ground, according to the police. The group attacked wax statues of the Rajapaksas’ parents kept inside the structure built in 2014, during Mr. Mahinda’s second term as President.

A court case, in which Mr. Gotabaya was indicted for embezzlement of nearly a million dollars, is pending. The destruction of this monument was symbolic of the anger that people in a Rajapaksa stronghold feel against Mr. Mahinda, who they once revered and propelled to Presidency for two successive terms.