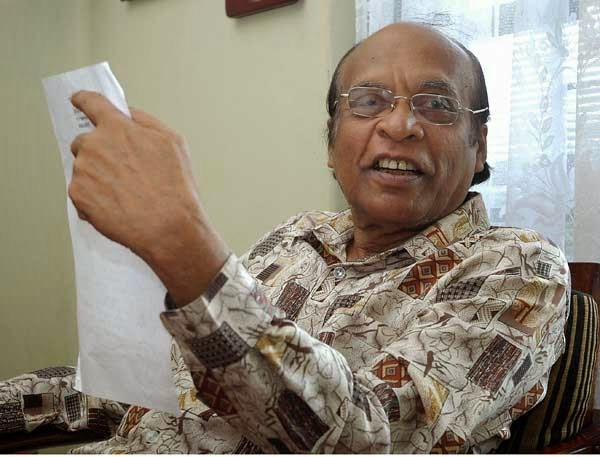 DEW calls for immediate presidential interventionChairman of the parliamentary oversight committee on public finance, Senior Minister Dew Gunasekara, MP, yesterday warned of dire consequences unless the ruling coalition ensured the proper functioning of COPE (Committee on Public Enterprises). Further deterioration of parliamentary supervision would lead to disaster, the veteran parliamentarian said, accusing some COPE members of brazenly neglecting their parliamentary duties.The Communist Party Chief was responding to a query by The Island yesterday.

An irate Gunasekara said that there were some members who had attended just one or two sittings during the past three years.
The last parliamentary election was held in April 2010.
Having failed to convince UPFA members of their responsibility to attend COPE sittings, Minister Gunasekara has sought President Mahinda Rajapaksa’s intervention. Responding to a query, the minister said that he had brought the pathetic situation to the attention of Speaker Chamal Rajapaksa recently. National List MP Gunasekara asserted that there was no option other than to replace those who had disregarded their responsibility. MP Gunasekara said that he was both shocked and embarrassed by the deteriorating situation.
MP Gunasekara said that the Public Accounts Committee (PAC) too faced a similar situation. According to him, COPE attendance lists were made available to both the President and the Speaker to underscore the seriousness of the crisis. The CP leader emphasized that unless the President and the Speaker resorted to tough measures those irresponsible members would never mend their ways.
A mocking Gunasekara alleged that parliamentarians would rush to attend live talk shows on state and private television channels, but ignored their parliamentary duties. MP Gunasekara said: “Just imagine the food waste. Food is prepared for 225 members, though many don’t often turn up. Those who attend sittings leave half way and others don’t come at all. Even if they attend, many members of oversight committees miss sittings. It cannot be worse than this. In a way the situation in parliament reflects the pathetic situation in the country.”
The CP General Secretary pointed out that Speaker Rajapaksa’s outburst in parliament was evidence of deterioration of parliamentary standards. All political parties, particularly the SLFP, the dominant constituent of the UPFA should examine the situation. It would be the responsibility of seniors to take remedial measures to prevent collapse of parliamentary standings as well as traditions, the MP said.
Speaker Chamal Rajapaksa lost his temper in Parliament last Wednesday and threatened to walk out of the House if both government and Opposition MPs did not abide by Standing Orders during question time. Could anything be as bad as that, MP Gunasekara said. The Speaker wouldn’t have resorted to such a threat if he was not really angry about the situation, the COPE chief said.
Asked whether he was satisfied with the role played by Opposition members in the COPE, MP Gunasekara admitted the Opposition functioned better than the government group.
Commenting on the UPFA’s failure to ensure the presence of all its members and their support for three orders the government moved recently under the Strategic Development Projects Act, Minister Gunasekara said that among those who missed parliament on two consecutive days were ten members who left for South Korea. The minister pointed out that over 40 coalition members skipped parliament on those days in spite of specific instructions from the top leadership to be present. Whatever the reasons for their absence, a political party or any type of organisation couldn’t afford to allow members to behave as they wished, the MP said.

By Shamindra Ferdinando
The Island