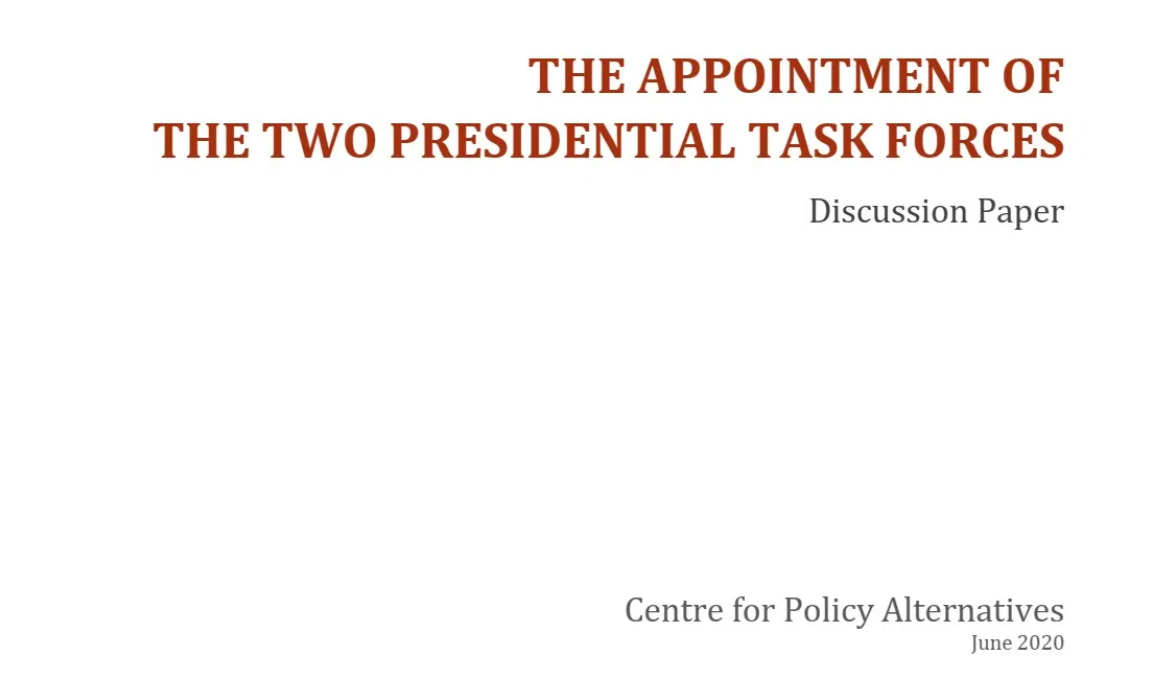 Colombo based Think Tank the Centre for Policy Alternatives has published  a highly critical  discussion paper on the presidential Tasks Forces (PTF) appointed by the president Gotabaya Rajapaksa. The discussion paper looks at the recently established two PTFs from strictly legal point of view.

These two Task Forces are appointed at a time when Parliament has not been functioning for more than three months, contrary to mandatory provisions of the Constitution. Notably, the Gazettes appointing the two Task Forces followed on the heels of the ruling by the Supreme Court of Sri Lanka refusing leave to proceed to all petitioners on the subject of the dissolution of Parliament for more than three months and the holding of free and fair elections. In the absence of a Parliament, there is no legislative oversight over executive action and this raises concerns regarding accountability and transparency of these Task Forces. Moreover, the composition of both these Task Forces, as is with the previous ones appointed in 2020, comprises of former and present military, law and order officials and others, with concerns raised about the creeping militarization in government and governance in Sri Lanka. With no oversight, effective checks and balances and growing reliance on military actors, the reliance of President Rajapaksa on Task Forces to govern Sri Lanka and its implications must be further studied. CPA notes that these present initiatives build on the campaign promise of President Rajapaksa prioritising discipline, stability and security. These steps, however, have serious ramifications for a free and open society and liberal democracy.

Each Task Force is assigned multiple tasks. In order for them to carry out these tasks, the President has sought by the Gazettes to;

▪ Authorize the Task Forces to investigate and issue directions as may be necessary in connection with the functions entrusted to it.

▪ Authorize the Task Forces to submit reports to him from time to time .

▪ Authorize the Task Forces to issue instructions, or request that all Government Officers and other persons whose assistance is required comply with such instructions.

▪ Instruct all Government Officers and others to provide all possible assistance and provide all information that may be provided. ▪ Direct the Task Forces to report to him all cases of delay or default on the part of any Public Officer or Officer of any Ministry, Government Department, State Corporation or other similar institution in the discharge of duties and responsibilities assigned to such public officer or such institution.

The Composition of the Task Force [to build a Secure Country, Disciplined, Virtuous and Lawful Society.]

The lack of civilian representation in this Task Force is consistent with the descent into militarization of the State apparatus which has been taking place over the last few months, with retired military personnel being appointed to several high ranking official positions10, and for the most part, taking control of the Country’s response to the COVID-19 crisis. Whilst militarization is not a new phenomenon in Sri Lanka, the consolidation of military and intelligence in governance is at an unprecedented level with serious implications towards the rule of law, reconciliation and constitutional democracy. CPA has on several occasions previously commented on why militarization is undesirable in a Democracy11, especially in post -war country which, is yet to see genuine reconciliation and transitional justice. In the absence of legislative oversight, the chilling effect of a Task Force having such control over civilian life, including possibly moral policing, is alarming.

Task 3 [of the PTF to build a Secure Country, Disciplined, Virtuous and Lawful Society] which empowers the Task Force to ‘take legal action’ is particularly problematic. It is unclear what this constitutes, especially in the context of it applying to persons based outside Sri Lanka. This appears to usurp the powers of the Attorney – General, who is not himself, or through a subordinate officer, represented in the Task Force. Section 12 of the Code of Criminal Procedure only permits a High Court to take cognizance of an offence by or at the insistence of the Attorney – General, and thus it is only the Attorney – General who can institute legal action for offences that can only be tried by a High Court.

This is made more ominous by the fact that there is no reference to narcotics under this task, meaning that this may be an attempt to allow the Task Force to take legal action for any offence, even those unrelated to narcotics, bypassing the Attorney-General’s Department.

1.Taking necessary immediate steps to curb the illegal activities of social groups which are violating the law which is emerging as harmful to the free and peaceful existence of society at present in some places of the country.

This task is extremely vague and raises several questions.

‘Illegal activities’ could mean any activity that is illegal or criminalized under the law. It is unclear what the phrase ‘harmful to the free and peaceful existence of society’ means. However, this phrase makes this task highly susceptible to abuse as it could be used to stifle dissent.

The use of the phrases ‘social groups’ and ‘present in some places in the country’ suggest that there may be specific groups or geographical areas this is intended to be applicable to, but this is not clearly indicated.

3 Take necessary measures to take legal action against persons responsible for the illegal and antisocial activities conducting in Sri Lanka while locating in other countries.

It is unclear what is meant by ‘take legal action’, and how the Task Force can be empowered to do such act in the absence of enabling legislation providing the power to do so, and procedure.

If the Task Force is to take necessary legal action against persons located outside Sri Lanka, it would be necessary that this is restricted to offences that the local courts have jurisdiction to try.

This Task implies that the Task Force can take steps to have person extradited to Sri Lanka. It is important that the procedures provided for by law are followed in such process and they contain checks to prevent the abuse of power.

The term antisocial activities in vague, and is susceptible to abuse.

President Rajapaksa’s 2019 election campaign pledged a disciplined, secure and stable Sri Lanka. Recent developments indicate that his preferred path to fulfilling these promises circumvents existing legal structures including his own Cabinet of Ministers, with a determination and force that arouses little or no opposition. As discussed in the present paper, he has chosen the path of ad-hoc Task Forces with wide powers to commence implementing his vision, and in the process undermine and potentially usurp powers of institutions provided for by law. Moreover, he has recognised loyalty above all else, appointing officials close to him to head each Task Force and filling each with present and retired military and law and order officials and a few others. The militarization and securitization of government and governance, set in motion with combatting COVID-19, is now consolidating itself in the absence of an elected legislature. The Government’s determination for efficiency is evident with the speed with which this has been introduced. Notably, this has happened in the absence of a Parliament and any effective checks and balances. If unchecked, such executive overreach will have a chilling impact on a free and open society and transform it into one defined by ethno nationalism propelled by an authoritarian and militarized State.

Read the full report as a PDF:Commentary-Two-Task-Forces-CPA-Final and online  here