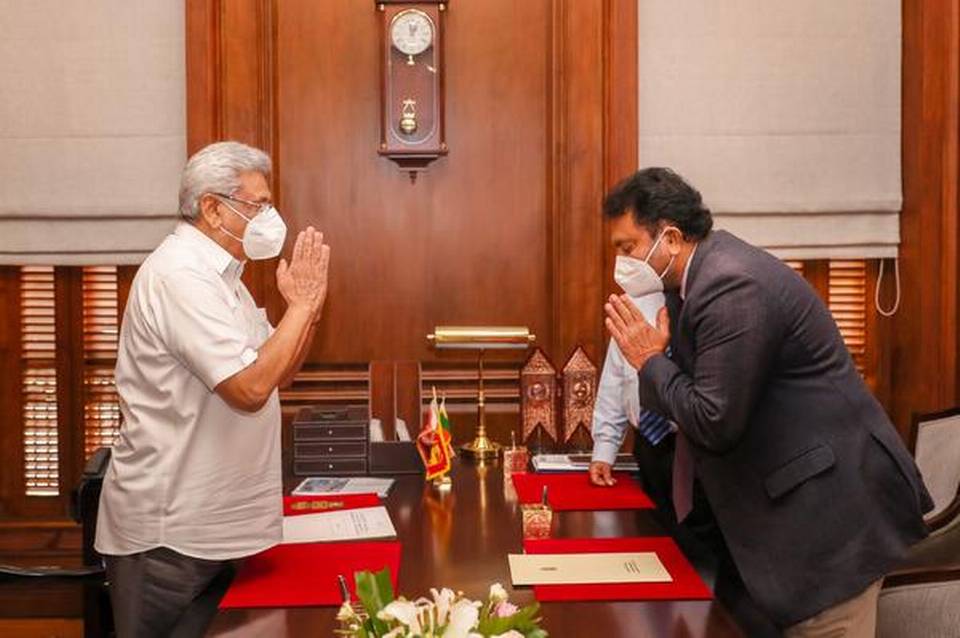 He has been accused of abduction, murder conspiracy

President Gotabaya Rajapaksa on Thursday appointed a former Navy chief, previously accused of abduction and conspiracy to murder, as Governor to the North Western Province, delivering what victims’ families called “yet another blow” to their 12 year-long fight for justice.

This is Mr. Rajapaksa’s second controversial appointment in recent months. In October, he chose a reactionary Buddhist monk Galagodaaththe Gnanasara, earlier convicted for contempt of court, and accused of inciting violence against Muslims, to chair a panel on key legal reforms.

A photograph released by the Presidential Media Division on Thursday showed Admiral of the Fleet Wasantha Karannagoda, dressed in a suit and palms held together, bowing to Mr. Rajapaksa, as he was sworn in to the most powerful office in Sri Lanka’s provincial administrative structure, as the President’s representative. All nine provinces in Sri Lanka are currently under their respective Governors’ rule, after the elected provincial councils lapsed in 2018 and 2019.

Mr. Karannagoda rendered “a great service to the Motherland during the humanitarian operation as the Commander of the Navy,” a statement from the President’s office said, of the man named 14th accused in a gruesome case now commonly referred to as “Navy 11” case.

In the years 2008 and 2009, 11 youth — most of them in their late teens and coming from Sinhala, Tamil, and Muslim families — went missing across different suburbs around Colombo.

Though the youth were forcibly disappeared in the last two years of the civil war, investigators said they were abductions for ransom, and that the case was not directly related to the war in the way scores of enforced disappearances of Tamils from that time are.

With witness accounts and the body of evidence — gathered by police’s Criminal Investigation Department — pointing to the apparent involvement of a team of naval officers, the Attorney General’s Department, in November 2019 indicted over a dozen high-ranking naval officers on charges of abducting and conspiring to murder the 11 young men.

The list of suspects, of high-ranking naval officers, included Mr. Karannagoda, who was Navy Commander at the time of the abductions. The evidence submitted to court outlined grim details of the abduction linked to a ransom racket, detention in an underground cell in the eastern Trincomalee district, and witness accounts that led investigators to infer that the boys had been killed, and their bodies disposed in the sea, according to local media reports of the court proceedings.

Activists and lawyers consider the case “emblematic” of the alleged criminal conduct of military during civil war years. It also drew notice for the rare progress made by way of evidence gathering and prosecution in court.

However, in a puzzling U-turn this August, the AG’s Department said it had decided not to proceed with the charges against the admiral.

After giving families some reason for hope by serving indictments — on 667 charges — in the high-profile case, the AG’s decision to spare one suspect alone of the grave charges drew wide attention. Including from the UN Human Rights Chief Michelle Bachelet, who expressed concern over developments in judicial proceedings “in a number of emblematic human rights cases” in Sri Lanka. “They include the Attorney General’s decision not to proceed with charges against former Navy commander Wasantha Karannagoda in the case of the enforced disappearances of 11 men in 2008 and 2009,” she told the Human Rights Council in September this year.

From the families’ perspective, the AG’s decision delivered “a severe blow” to the case. They challenged it at Sri Lanka’s Court of Appeal, which subsequently dismissed their petition on grounds that the AG’s department had the discretion to drop charges against a suspect.

Asked about the AG’s decision — that was reiterated in court this October — Sri Lanka’s Justice Minister Ali Sabry said the government “does not interfere” with the Attorney General’s Department that will “only act on merits” of a case. “Our sympathies are with the families. The perpetrators will be brought to justice,” he told The Hindu then.

Even as hearings on the original case are set to continue — the charges against the other 13 officers remain and the admiral is yet to be acquitted — victims’ families are appalled at Thursday’s appointment.

“This is completely unfair,” said Jamaldeen Jenifer Weerasinghe, mother of Mohammed Dilan Jamaldeen, one of the 11 disappeared youth. “The admiral was the navy commander when my son was abducted. He certainly knows what happened to him and the others. That is why he was named a suspect. How could they give him a post like this?” she asked, terming the development “another huge blow”.

Ms. Weerasinghe, 61, does not miss a single agitation by families of the disappeared in the south — thousands of youth went missing during the leftist Janatha Vimukthi Peramuna armed insurrections in the 1970s and 1980s — held periodically outside the Supreme Court and elsewhere. Rights watchdog Amnesty International has said Sri Lanka has the world’s second highest number of enforced disappearances with a backlog of 60,000 to 1 lakh since the 1980s. Just like their Tamil counterparts in the north, protesting for years demanding answers about their missing loved ones, the mothers of the 11 youth, too, have not got any closure.

Refusing to accept what the police have inferred from evidence, Ameenathul Jiffriya Sabreen, mother of another of the missing youth Mohammed Sajith, firmly believes her son is alive somewhere. “I am running to different courts for 12 years now, I am ageing, I am forgetting details of what happened that day,” she told The Hindu, after a recent court hearing. Speaking of her son with tears rolling down, Ms. Sabreen said he “is a gem”, looks like [Tamil actor] Suriya, with his hair “neatly combed” to one side. “All I want is to have my son back. After that, I won’t think about these cases, or who held the boys this long. I don’t want anyone punished. I just want my son.”

The President’s appointment of the admiral as Governor also adds to the list of military men given civilian positions in recent years. Since 2020, Mr. Rajapaksa has appointed at least 28 serving or former military and intelligence personnel to key administrative posts, the UN Human Rights Chief Bachelet noted in a report early this year.

Mr. Karannagoda’s appointment is “a double whammy”, according to human rights lawyer Bhavani Fonseka from the Colomb-based NGO Centre for Policy Alternatives. “It further entrenches impunity and militarisation,” she said, adding: “It is also a clear indication of the government’s complete disdain for political accountability and reconciliation.”

It is only consistent with the emphatic pledge made by President Rajapaksa, a former military man, to protect “war heroes” at any cost, although some of them face serious allegations of war crimes. Mr. Rajapaksa translated the promise to action about four months after his election, when he pardoned Sunil Ratnayake, a soldier who was on death row for killing eight Tamil civilians, including a five-year-old and two teenagers, in 2000 during the civil war.

But Dilan’s parents — Jenifer Weerasinghe and her husband Mervyn Premalal Weerasinghe — do not feel secure despite their military affiliation. “My husband is also a retired army man — he was at the Sinha Regiment; he too served our country. Why is the President not taking care of us?” she asked, speaking at a recent event to mark disappearances, barely hiding her rage.

Thursday’s development could be a setback, but the struggle is not over, Ms. Weerasinghe said. “I am ready to go to Geneva or anywhere else to fight for justice. I will not give up. This struggle will not end unless justice is served.”