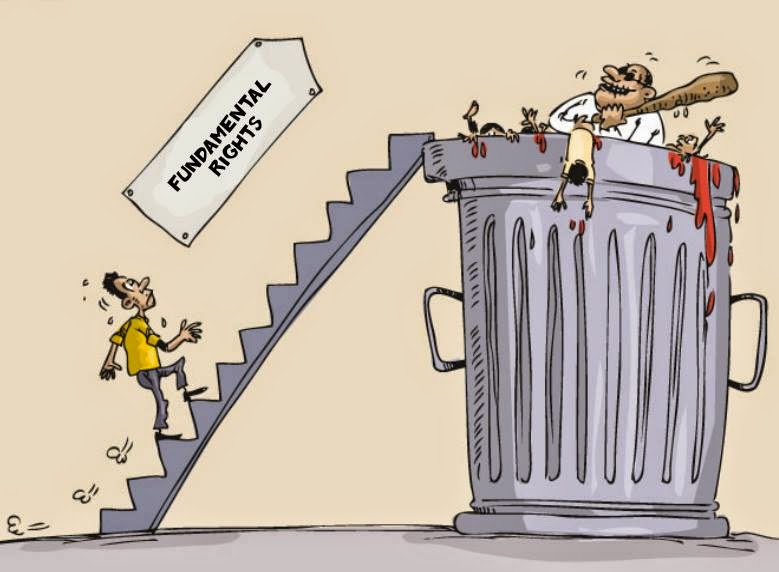 Since the time Sri Lanka was included in the World Rule of Law Index by the Washington DC-based World Justice Project or WJC in 2012, it had never scored high or ranked high among other nations. It had been a poor observer of the Rule of Law throughout, sparking wide criticism from those within as well as from those outside the country.

In this background, the good governance government elected to power in 2015 was expected to fix it as a matter of urgency and improve the country’s track record of observing the Rule of Law. But the information released by WJP for 2015 and 2016 reveals the opposite. It shows that Sri Lanka’s overall score on the Rule of Law, which had been declining since 2012, has further fallen in the two years under reference. Against this background, its ranking too among the world nations who have been indexed under the Rule of Law has slipped by several notches. This is an ominous development and the good governance government could ignore it only to its peril.

WJP seeking to improve Rule of Law among world’s nations

WJP is an initiative by the American Bar Association to promote the Rule of Law among the world’s nations (available at: http://worldjusticeproject.org/who-we-are-0 ). It publishes a number of publications on the subject, but among them, the flagship has been its Rule of Law Index Report, released since 2008 annually bringing many new nations into the forum in each of the succeeding years.

Sri Lanka was included in the index as from 2012/13 and is being assessed annually thereafter. All Rule of Law Index reports can be downloaded free of charge from the link, http://worldjusticeproject.org/publications .

To prepare the Rule of Law index for the individual countries, WJP surveys the perceptions of the public and cross-checks the same with in-country experts. These two outcomes are then validated by comparing with other independent global sources.

The objective of compiling the index has been to identify the strengths and weaknesses in the observance of the Rule of Law in the countries included in the index and help policy makers to adopt appropriate policy choices to strengthen the same.

Hence, a country which has been ranked low in the index based on the evidence presented by its own citizens and experts within the country should look at the findings in the report from a positive perspective.

The Rule of Law is a must for sustainable development

Legally, the Rule of Law has been defined as upholding the principle that ‘all are subject to law and no one is above the law’. In other words, the long arm of the law should reach everyone impartially, objectively and indiscriminately.

In this sense, no one enjoys privileges or special rights; by the same token, no one should be penalised on account of his or her caste, class, clan or religious or political beliefs. Such a system would create a just society thereby laying foundation for sustainable and true development of peoples of a country.

Approaching the Rule of Law from its outcomes

However, WJP has found that this definition is difficult to be adopted or measured though it contains universal principles. Hence, as a practical measure, it has approached the Rule of Law from the point of three most important outcomes embodying it: accountability, respect for fundamental rights and access to justice.

Says WJP: “The Rule of Law index seeks to embody these outcomes within a simple and coherent framework to measure the extent to which countries attain these outcomes in practice by means of performance indicators.

For this purpose, WJP has come out with four universal principles embodying the Rule of Law as follows.

First, the Government and its officials and agents as well as individuals and private entities are accountable under the law. Thus, in this expanded version, the Rule of Law is applicable not only to the government sector but also to the private sector. Accordingly, if they violate laws, they should be brought before justice irrespective of their size, position or strength.

The second pertains to the nature of laws. They should be clear, publicised and just. They should be applied evenly and designed to protect fundamental rights. Those rights should include the security of persons and property which are known commonly in economics as property rights.

Third, the process of the enactment, administration and enforcement of laws should be accessible to citizens while such processes should be fair and efficient. This means that the citizens should participate in the law enactment and enforcement processes actively and governments should provide all the facilities for them to do so.

Fourth, justice should be delivered timely by competent, ethical and independent judges. There should be an adequate number of judges with required resources at their command to deliver justice. They should be drawn from the communities they serve to reflect the makeup of such communities.

Methodology used to compile the index

To assess Sri Lanka’s position in the index for 2015 and 2016, face to face interviews have been conducted in 2014 on two occasions with 1,030 individuals drawn from three main regional areas, namely, Colombo, Negombo and Kandy. Hence, the citizens’ perception results included in the index pertain to the period of administration under President Mahinda Rajapaksa for both years.

However, the response of the qualified experts, numbering some 300 drawn from registered law firms and universities, has been collected in each of the years under reference. Thus, the results of the 2016 index mostly pertain to the period of the new good governance administration. These results show a slight deterioration from the previous year demonstrating that the new good governance government has failed to improve its score on the Rule of Law.

Eight factors that contribute to the Rule of Law

There are eight factors that have been included in the computation of the World Rule of Law Index by WJP. All these factors, as described below, seek to bring out the three outcomes of the Rule of Law, namely accountability, fundamental rights and access to justice.

Governmental powers should be kept under check

The first factor examines the constraints which the government in power has for running its business impartially and justly. They measure the effectiveness of the institutional checks on government power by the legislature, the judiciary, and the independent auditing and review agencies as well as the effectiveness of the civil society institutions in holding public officials accountable for their action. Sri Lanka’s score on this count has been low at around 0.5 out of scoreable maximum of 1. The disregard of the audit and audit review processes and media highlights by the governments in power has been the main contributor to this low score.

Parliamentarians are the most corrupt in Sri Lanka

Second, the absence of corruption measures the cleanliness of the government operations. It covers three forms of corruption, namely, bribery, improper influence by public or private interests and misappropriation of public funds or other resources.

Sri Lanka’s score on this count has fallen continuously from 0.5 in 2012 to 0.45 in 2016, indicating that the country has not been able to effectively check on the occurrence of corruption. What should worry the rulers today is the perception by people that Parliamentarians are the most corrupt lot in society as demonstrated by the low score of 0.27 assigned to that segment compared to the average mark of 0.5 for the factor.

Government should be open and transparent

The third factor, open government, measures whether basic laws and information in legal rights are publicised and assesses the quality of information published by the government. It also measures the requests for information are properly met by government agencies and whether people can make specific complaints to the government. Sri Lanka’s score on this count has also been below 0.5 and on the decline over the time.

Rights of the citizens should be protected

The fourth factor pertains to the fundamental rights of citizens. It covers, among others, effective enforcement of laws that ensure equal protection, the right to life and the security of the person, due process of law and rights of the accused.

It also includes the freedom of opinion and expression, beliefs and religion, the right to privacy, freedom of assembly and association and fundamental labour rights. Sri Lanka had a good score on this count at 0.6 in 2012 but has declined sharply to 0.42 in 2016. The main areas of concern have been discriminatory treatments, lack of privacy, shortcomings in the due processes of law and failure to protect life and property.

Law and order are a must

The fifth factor has been the order and security measuring threats such as conventional crime, political violence and violence as a means to redress personal grievances. Sri Lanka has got a good score in this regard at above 0.65 and has been on the increase over the years.

The sixth factor has been the quality of regulatory enforcements. It is usual that regulations are captured by various public and private interests and it is necessary to eliminate them in order to improve the quality of outcomes arising from observing the Rule of Law. Sri Lanka’s score on this count has been low at about 0.5 and has remained unchanged around that level.

Civil justice should be accessible to all

The seventh factor is the civil justice measuring whether justice systems are accessible and affordable, free of discrimination, corruption and improper influence by power groups. It also touches upon the delays in delivering justice in civil cases. Sri Lanka’s score on this count has been very low at around 0.5 and it has been on the decline.

Effective criminal investigations are a must

The eighth factor has been the quality of the criminal justice measuring whether criminal investigations, adjudication and correctional systems are effective, impartial, free of corruption, improper influence and protective of the due process and the rights of the accused. Sri Lanka has a declining score on this count and it remains below 0.5 at present.

The latest scores in the Rule of Law Index have shown that Sri Lanka’s high hopes of restoring good governance and the Rule of Law after the change of the government in January 2015 have vanished into thin air. This is not a good development and has to be reversed on a priority basis. Hence, the good governance government should take a serious note of the declining score on the rule of Law and adopt early measures to attain the desired results.

– Edited version  the article “The Good Governance Government should not ignore Sri Lanka’s slipping down on the World Rule of Law Index” by W.A. Wijewardena, a former Deputy Governor of the Central Bank of Sri Lanka, can be reached at [email protected]