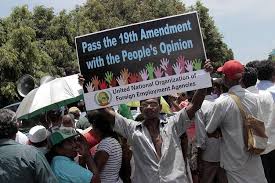 ECONOMYNEXT – Sri Lanka constitution has to be changed and a 19th amendment should be abolished, Basil Rajapaksa, brother of President Gotabaya Rajapaksa said in a television interview.

“It is my view that the 19th amendment should be completely abolished,” Rajapaksa, who formed the Sri Lanka Podujana Party of the new President said in an interview with Hiru TV, a privately owned television channel.

“There is a similar view in our party. The 19th has some good parts. It has more bad parts. As a whole it should be removed. But there are some parts which are good, which we can keep.”

He did not specify the bad parts.

The 19th amendment reduced executive powers of the President, and also set up independent commissions, which has strengthened the independence of the judiciary and police.

The 19th amendment also re-established term limits to the presidency.

Analysts have said that Sri Lanka’s public service lost its independent, started to break down, and became partisan after permanent secretaries to ministries were abolished.

The 19th amendment did not address crisis involving ministry secretaries but a constitutional council and independent commissions improved appointments of judges, the police chief and some other officials, restoring partial independence to the public service.

It also banned foreign passport holders from being elected. (Colombo/Nov19/2019)