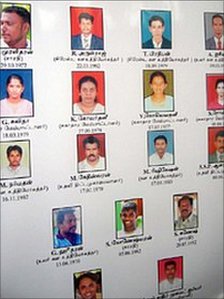 Human Rights Watch has accused the Sri Lankan government of lacking the will to prosecute the security forces for the killings of 17 aid workers in 2006.
There was widespread revulsion following the murders of the 16 Tamils and one Muslim in the north-eastern town of Muttur during the civil war.
European monitors were convinced government troops were responsible, but officials blamed Tamil Tiger rebels.

The government has since ruled out reopening an inquiry into the murders.

“The Sri Lankan government is no closer to prosecuting those responsible,” said James Ross, HRW’s legal and policy director.

“The Rajapaksa government is not just unwilling to uncover the truth, it appears afraid of the truth.”

HRW says that the government has a poor record of investigating serious human rights abuses, and “impunity has been a persistent problem”.

“Despite a backlog of cases of enforced disappearances and unlawful killings going back two decades that run to the tens of thousands, there have been only a small number of prosecutions,” it said in a statement.

“Past efforts to address violations by creating ad hoc mechanisms in Sri Lanka have produced few results, either in providing information or leading to prosecutions.”
‘Afraid of the truth’

Those killed on 4 August 2006 included four women. They were all employed by the French agency, Action Against Hunger (ACF), and had been involved in tsunami relief work.
Aid workers’ bodies being exhumed Colombo has come under pressure over atrocities alleged to have been committed by the army

The bodies of 15 of them were found lying with bullet marks in their heads; two other bodies were later discovered in a vehicle nearby.

At the time there was heavy fighting in Muttur between the government and the Tamil Tigers, and the killers’ identities have never been pinpointed.

European monitors overseeing an ill-fated ceasefire blamed the security forces – but they have denied the charge.

But a year later a presidential inquiry into this and other cases was reported to have exonerated the army and navy – though its report was never published.

A senior defence official, Lakshman Hulugalle, told the BBC that because the official inquiry had cleared the army and security forces, the case was closed and there was no need for another investigation.

The BBC’s Charles Haviland in Colombo says that there has recently been considerable international pressure on the government over atrocities alleged to have been committed by the army towards the end of the war.

But on Monday, the government came out with a detailed response saying the blame for civilian deaths lay overwhelmingly with the Tamil Tigers.
BBC Sinhala