By Dharisha Bastians in Aluthgama

Everything smells smoky in Dharga Town, Aluthgama, the morning after.
Dozens of Special Task Force personnel stand guard on the edges of the Muslim settlement, separated from the Sinhalese village by a few metres. On doorsteps and street corners, people huddle in little groups, speaking in whispers and shooting wary looks at outsiders flocking to the village at dawn, many of them lugging camera equipment.
Life at a standstill in Dharga Town
With the curfew imposed on Sunday night still in effect, life is at a standstill. But in the eerie early morning calm, tension wrought by last night’s mayhem hangs heavily in the air. The charred and still smouldering ruins of a motorbike shop mark the entrance to Dharga Town, where the worst of the sectarian violence that erupted on the streets had unfolded the previous night.
“He came here yesterday, that monk – and he said there would be no more Dharga Town,” says N. Yusuf, standing on the one street that cuts straight through the town. He insists the Government should never have allowed the Bodu Bala Sena rally to go ahead in the area, after a traffic accident had made clashes appear imminent only last Thursday. 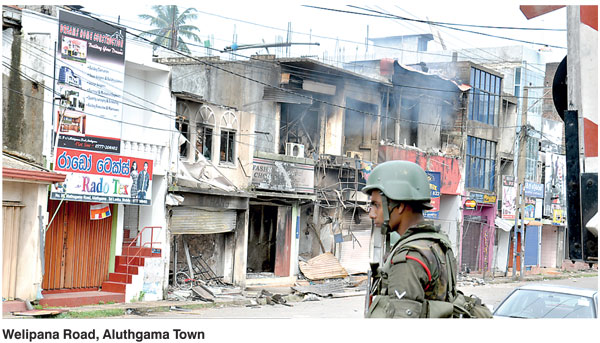 1
But arrive the monks did, together with a crowd of some 7,000 people, according to Dharga Town residents. Hate speech and fear mongering flowed freely from their stage in Aluthgama, on Sunday afternoon. With Muslim youth congregating in street corners in anticipation of trouble, the stage was set for the bloody night of rioting that was to follow.
The first clashes erupted when rally attendees decided to march through the most populous Muslim areas, shouting anti-Muslim slogans and vowing to protect the Sinhala Buddhist nation. To curb the unrest, Police moved swiftly to impose curfew in the division and urge people to stay indoors. But smaller crowds were regrouping, moving separately through different streets of Aluthgama.
“Police told us to stay inside, but the crowds were moving about freely outside. The curfew didn’t seem to apply to them, just like the tear gas,” complained M. Farina, a Dharga Town resident.
Criticism of the STF and Police personnel
The women are vocal in their criticism of the STF and Police personnel, that they claim did little to stop the rampaging mobs. “I watched, they were standing right there, watching the bakery being attacked,” says Farina. Everyone had failed them, she says, Muslim politicians, the Police units sent in to ‘protect’ Muslim towns and villages. 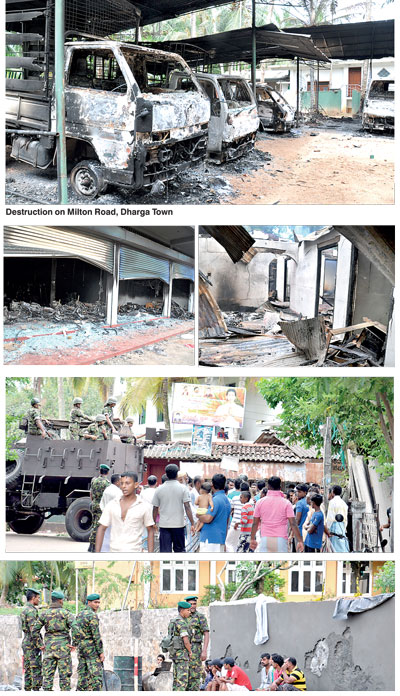