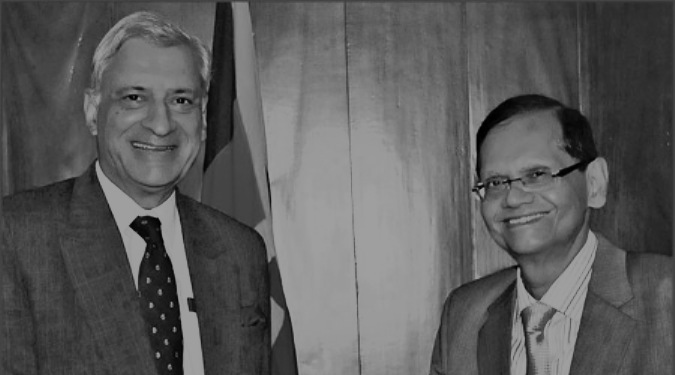 By SLB.
Issuing a statement at the end of his 3 day visit to Sri Lanka Commonwealth Secretary-General Kamalesh Sharma promised to strengthen the Human Rights Commission and Press Council of Sri Lanka among other such promises.

Both institutions are politicaly controlled by the Rajapaksha government. NHRC has in the recent past has proved its pro Rajapkasha bias on number of  occations. It remains in B status in the International Coordinating Committee of National Human Rights Institutions  since 2008. Sri Lanka NHRC is not an independent body according to Paris Principals of the ICC. Instead of calling for an independent NHRC Kamalesh Sharma has promised to strengthen this political tool of the regime.

The Press Council of Sri Lanka is a censorship mechanism which was  revived by the regime  few years ago. All major media organisations, including the Editors Guild of Sri Lanka and the Free Media Movement has opposed the re establishment of the Press Council. It has been opposed by all international press freedom organisations well. Now Kamalesh Sharma instead of asking to repeal it has promised to strengthen it.

Further more  Kamalesh Sharma has welcomed the proposed changes of law related to the impeachment of superior court judges, a move that has been strongly criticised   by independent lawyers. This proposed 19th amendment will be another blow for the independent of judiciary according to senior lawyer S. Sumanthiran , a TNA MP.

Sri Lanka is a founding and committed member of the modern Commonwealth. Today, I conclude what has been a productive visit to the country.

I was received by the President, His Excellency Mahinda Rajapaksa. I held discussions with the Speaker of Parliament, Hon Chamal Rajapaksa; the Leader of the Opposition, Hon Ranil Wickremesinghe; the Hon Minister of External Affairs, Professor G L Peiris; the Monitoring Member of Parliament for the Ministry of External Affairs, Hon Sajin de Vass Gunawardena and the Secretary to the President, Mr Lalith Weeratunga.

Others I met included the Elections Commissioner, Mr Mahinda Deshapriya; the Chairperson of the Human Rights Commission of Sri Lanka, Justice Priyantha R P Perera as well as other members of the Commission. I also met the community of resident High Commissioners in Colombo, and in the limited time available, my delegation and I held discussions with a number of others, including representatives of political, civil society and professional groups.

These meetings were informative and valuable. They afforded the opportunity to explore how the Commonwealth’s rich network of shared resources, experiences and opportunities can be of greater assistance to Sri Lanka.

The Commonwealth adds value globally in its work in democracy, development and diversity. We can expect the 2013 Heads of Government Meeting to have a focus on inclusive growth and development opportunities.

The goal of the Commonwealth’s partnership is to support Sri Lanka’s national efforts and plans to provide access for all its citizens to a life of opportunity and dignity.

The Commonwealth remains committed to supporting Sri Lanka in continuing to strengthen its culture of democracy, pluralism, human rights, sustainable development, the rule of law, and other fundamental Commonwealth values and principles.

The Commonwealth agreed to pursue a partnership with Sri Lanka in various priority areas that were jointly identified during my last visit in September 2012. There has been marked progress in a number of these areas in the last six months, as outlined in the annex to this statement.

As a result of consultations during this visit, we have agreed to enhance collaboration in the areas outlined below:

It is a Commonwealth norm to have independent election commissions in our member states. Successive Commonwealth Observer Groups present over the years at the time of elections in Sri Lanka have recommended this. While the Government works towards that objective, we shall cooperate to strengthen practically the independence and effectiveness of the existing Office of the Commissioner of Elections, including through technical assistance and other support available through the Commonwealth Electoral Network.

We welcome the implementation of recommendations made earlier by Commonwealth election observers, notably the development of codes of conduct for political parties and the media, as well as the implementation of measures against the misuse of state resources during election campaigns. We shall explore with the Commissioner of Elections how these advances can be further strengthened practically ahead of the next elections.

We welcome the declared intention for elections to be held in the Northern Province in September 2013. We also welcome confirmation we received that preparatory arrangements for those elections are in place.

We have agreed to contribute to enhancing the independence and authority of the Human Rights Commission of Sri Lanka (HRCSL). We welcome the progress by the HRCHL to regain ‘A’ status in the International Coordinating Committee of National Human Rights Commissions. This will enable the HRCSL to assume a leadership role during Sri Lanka’s term as Commonwealth Chair-in-Office.

In practical terms, we have agreed to explore options to provide technical support to the HRCSL in the following areas:
Training and education of Commission staff
Expanding training of police personnel on human rights obligations
Enhancing the training programme for journalists on human rights reporting
Bolstering capacity to be involved in national reconciliation processes
Strengthening capacity to investigate human rights abuses

The recent removal of the Chief Justice generated widespread national debate and differences of view. In this context, I have emphasised the importance of the Commonwealth’s Latimer House Principles on the separation of powers, the rule of law and the independence of the judiciary. We welcome the recognition of the need for change, to ensure that any such process in future is free of contention and does not call into question Sri Lanka’s commitment to the independence of the judiciary and separation of powers.

The Commonwealth will make available an expert analysis of the practice in Commonwealth countries relating to the appointment and removal of senior judicial figures, and the independence of the judiciary, for Sri Lanka to draw upon in determining legislative and other changes required. Commonwealth assistance would also be available with any related legislative drafting required to ensure that changes can be introduced to Parliament and implemented in a timely manner.

All Commonwealth member governments are committed in the 2009 Affirmation of Commonwealth Values and Principles and the 2012 Charter of the Commonwealth to freedom of expression and the free flow of information, including through a free and responsible media. To these ends, we have agreed to support the independence, effectiveness and professional standards of Sri Lankan journalists through the following:

Provision of technical expertise for Sri Lanka to undertake an institutional assessment of the Sri Lankan Press Council, with the aim of identifying measurable steps for strengthening the Council’s independence and effectiveness, and to provide support for implementing these steps;

Provision of technical assistance options in support of the Sri Lankan Press Institute, including to help raise the quality of reporting on issues relating to democracy and development.