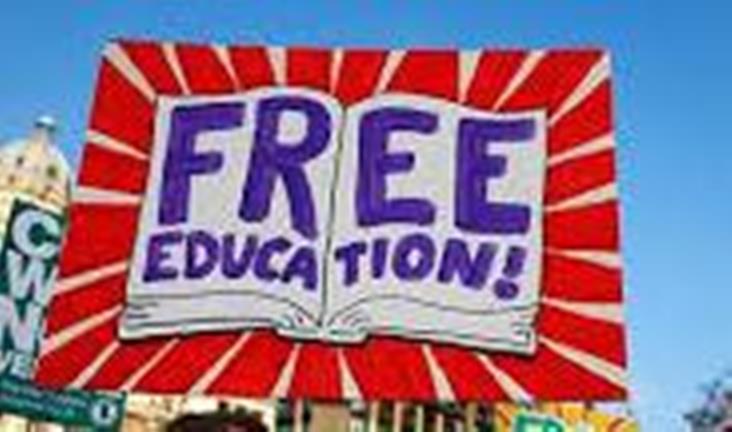 It is with grave concern that we note that the Budget for 2017 does a great injustice to the ordinary people of this country, the vast majority of its citizenry.  Education in general, in all forms, primary, secondary and tertiary, has been the cornerstone of our democracy.  It has meant mobility for many, made social justice its focal point and made our struggles vibrant. Any attack on free education is an attack on democracy.

Our education policy is founded on the 1943 policy which states “education in a democratic society should be free at all stages. Talents and ability are not confined to any social class or group and any social system must provide for their emergence by the provision of equal educational opportunities…” (Government of Ceylon, 1943).” All subsequent educational initiatives must extend that fundamental tenet and be justified on those grounds. The present government has undermined this basic feature of our national policy in this budget.

The 2017 budget proposes a significant erosion of and a roll back of the gains of free education, namely the widespread distribution of education to the people. Specifically, the budget proposes both a scaled down allocation for education, at all levels, and worse, a channelling of funds toward private establishments, taking away what could be given to state schools and universities and bestowing them on private enterprises. The cherished ideals of free education have been abandoned as evident from the provisions of the budget.

The Finance minister says that this year’s budget for education is much reduced from last year’s allocation, as the government found that it could not spend the latter. If that is so, why do we still have the phenomenon of schools compelling parents to provide for their children through so many fees and expenses? It is almost two years since the current government took office and it has failed to achieve the many promises made as regards education.  It has failed to: create an effective teacher training programme; develop a salary scale fitting a professional job category for teachers; address the problems of parents and students over mounting costs of education; address the problems in admitting students to good schools that allow them to fulfill their aspirations and; do away with an exam oriented educational system that robs children of their childhood.  The government has failed to even develop a comprehensive policy on education. Yet, Ravi Karunanayake states:

Such a statement requires explanation and accountability. As explanation the Minister of Education responded with, “Often, the money is not passed by the Treasury when we want it. There are delays. That is one reason the utilisation rate is low” (Nov 20, 2016). Clearly there is need; the problem lies with the treasury, red tape and the lack of will on the part of the government.

Instead of keeping their promises to the people, the Minister of Finance proposes to bill students at the beginning of their university education so that they know how much the public is paying towards their education. Considering that the Minister feels he can brush aside unspent funds in such a cavalier fashion, this proposition is somewhat ironic. It also comes at a time when the government is proposing tax holidays for businesses. Who will foot the bill here?

Education in the 2017 Budget

The budget is troubling both because of amounts allocated and the nature of allocations quite contrary to the values underlined in the UNP election manifesto, which outlined a plan to gradually increase allocations to education to 6% of GDP. The budget estimates indicate an approximately forty billion rupee decrease to education, higher education and provincial education combined.

Budget for Provincial Education. A desirable policy direction would also be to strengthen the provincial school system which caters to a majority of students in rural areas. This would improve access to good schools locally, rather than to distant urban schools. However, allocations to provincial schools are down by Rs. 10 billion from last year’s estimates.

Budget Proposals for Education. An analysis of the budget proposals gives the best indication of the government’s vision for education, especially when no policy document on education has been created. Figure 1 clearly shows that a substantial portion of the allocation goes to private entities (16% for loans and insurance and 45% for computer rental and tabs). 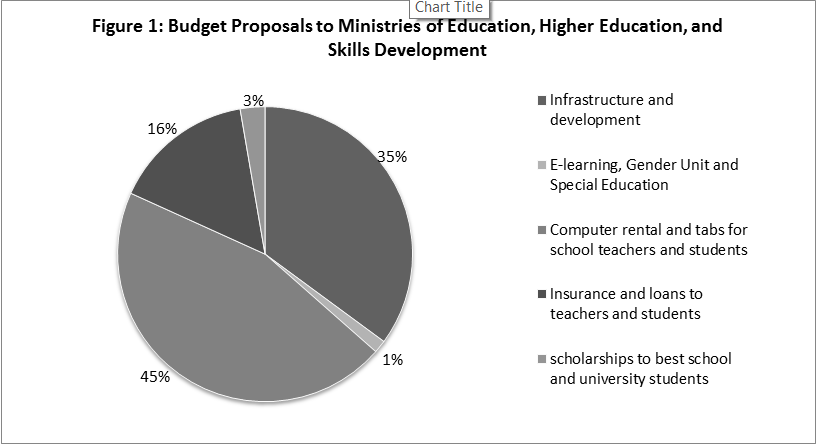 The extent to which the public will finance private business interests is highlighted in the breakdown of insurance and loan schemes given in Figure 2.  These schemes allow the government to channel public funds to the private sector as ‘welfare’. For instance, funds for health insurance will cover private healthcare services for children. These funds should be instead be used to strengthen Free Health; they belong in the health budget, not education. 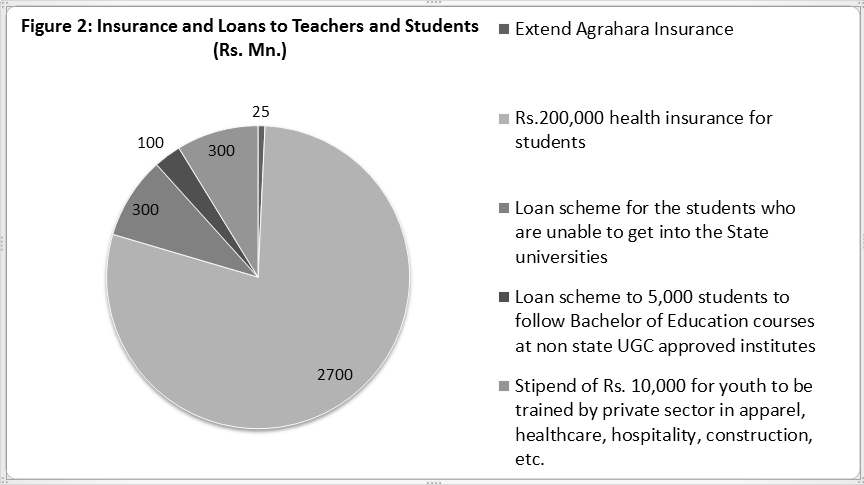 There is no evidence of a long term vision that would strengthen the school systems’ teaching, curricula, infrastructure, and access in a systematic way. It is almost as if the government has given up on the system. Overall, one can see that the budget offers little toward strengthening free public education.

One is compelled to ask the question: Why should the state fritter away people’s resources, publicly owned capital, in funding profit making ventures? Whom does the state serve? The people or business ventures which serve not the people by promoting their wellbeing, their upliftment and empowerment, but the interests of a profit making class.

The budget ushers in voucher systems, opening education to private and for-profit business initiatives, and the use of ICT as an area that will promote growth, but as we can see from global happenings, the trend is now to get back to basics, slow down, and consolidate the gains of what we have while promoting local interests (Stiglitz, 2016). Globally, we see people fighting back against neoliberal education policies in South America and Western Europe. Yet, the government feels the need to push on with its agendas. This government’s regressive actions will haunt us for decades and generations to come.

We protest: our struggle for free education and the right to protest

In addition to creating a budget that is clearly not people-friendly, the Minister of Finance feels the need to attack our democratic traditions. Ravi Karunanayake states, “As a responsible government, we cannot allow the country’s development be held at ransom by a few placard carrying politically motivated groups.” We say we cannot allow the country’s education to be left to ruthless racketeerism and profiteering politicians. If a high-ranking politician is going to sneer at the active forces of democracy, as placard bearing activists, we would like to remind him that he too joined the sea of placards not too long ago to fight for the 6% demand!  Short memories might be the mainstay of this government’s anti-people policies and it’s all too quick dismissal of social justice and free education, but we will continue to hold our placards high in our struggles!

Education is a heritage gained through massive public mobilization 70 years ago. From the time of the Kannangara policy of free education, we have fought to uphold our free education system. To that end, we publicly condemn the budget’s lack of commitment to free education and raise the banner of struggle and protest here.

Movement for Land and Agricultural Reform