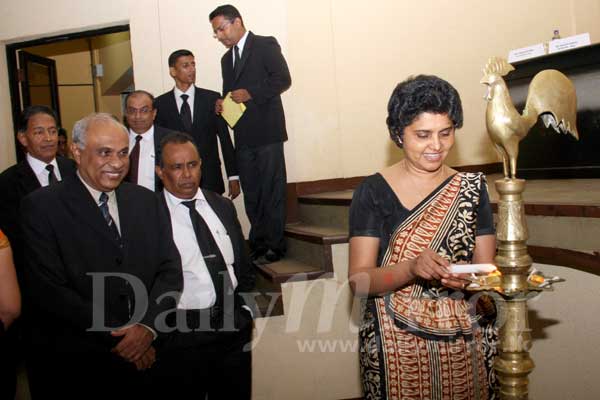 The impeachment process against Chief Justice Shirani Bandaranayake ignores international standards and practice, says the ICJ.
The ICJ urges the government of Sri Lanka to take immediate steps to uphold the independence of the judiciary and adhere to international standards and practice on the removal of judges.
Today, the Chief Justice and her team of lawyers walked out of the impeachment hearing in protest over the denial of a fair hearing.

Protests supporting and opposing the impeachment process erupted on Tuesday 4 December 2012 as the Chief Justice appeared before the Parliamentary Select Committee for the second time.

Over two hundred judges, several hundred lawyers, trade union leaders and a large number of religious dignitaries assembled to show their support for the Chief Justice.

Opposition members of parliament publicaly called on the Government to adhere to principles of fair trial and due process in the impeachment process.

Reportedly the Chief Justice has been denied the right to cross-examine potential witnesses and has not been provided full disclosure of the allegations against her.

The Parliamentary Select Committee has also denied the request for a public hearing and prohibited observers from attending.

“Parliament is pushing ahead with an impeachment process that fails to adhere to fundamental principles of due process and fair trial,” said Sam Zarifi, ICJ Asia Pacific Director. “The Chief Justice’s impeachment is part of a relentless campaign waged by the Rajapaksa Government to weaken the judiciary. An independent judiciary is the principle check on the exercise of executive and legislative powers – vital to the functioning of a healthy democracy.”

As recalled by the United Nations Special Rapporteur on the independence of judges and lawyers in a statement last month, international standards require that judges be removed only in exceptional circumstances involving incapacity or gross misconduct.

A cornerstone of judicial independence is that tenure of judges be secure.

“Any process for removal must comply with all of the guarantees of due process and fair trial afforded under international law, notably the right to an independent and impartial hearing,” Zarifi added.

The United Nations Human Rights Committee, in its 2003 concluding observations on Sri Lanka, expressed concern that the procedure for removing judges under Article 107 and the complementary Standing Orders of Parliament was not compatible with Article 14 of the International Covenant on Civil and Political Rights.

The Parliamentary Select Committee, presiding over the impeachment hearings is composed exclusively of members of parliament, the majority of which are drawn from the Government coalition.  No members of the judiciary are permitted to sit on the Select Committee.

Comparatively in India, an impeachment hearing is presided over by a three-member committee comprised of a Supreme Court justice, a Chief Justice of any High Court and an eminent jurist.

In South Africa, a judge may only be removed after a hearing by the Judicial Service Commission, a body composed of members of the judiciary.

In Canada, all removal proceedings are conducted by the Judicial Council, a body composed of 38 chief and associate chief justices of the superior courts and chaired by the Chief Justice of Canada.

The United Nations Special Rapporteur on the independence of judges and lawyers warned against the misuse of disciplinary proceedings as a reprisals mechanism against independent judges.

If the bill passed, the Minister of Economic Development (who is also the President’s brother Basil Rajapakse) would have had control over a fund of 80 billion Sri Lankan rupees (611 million USD).

Attacks on the judiciary have been escalating in recent months.  In July 2012, Government Minister Rishad Bathiudeen threatened a Magistrate in Mannar and then allegedly orchestrated a mob to pelt stones at the Mannar courthouse.

In early October, the ICJ condemned the physical assault on the secretary of the Judicial Service Commission, Manjula Tillekaratne.

In early November, the ICJ issued a report, Sri Lanka’s Crisis of Impunity, documenting how the erosion of state accountability and judicial independence, has led to a crisis of impunity in Sri Lanka.

The ICJ calls on the Government of Sri Lanka to take active measures to promote the independence of the judiciary and rule of law by adhering to international standards and practice in impeachment hearings.