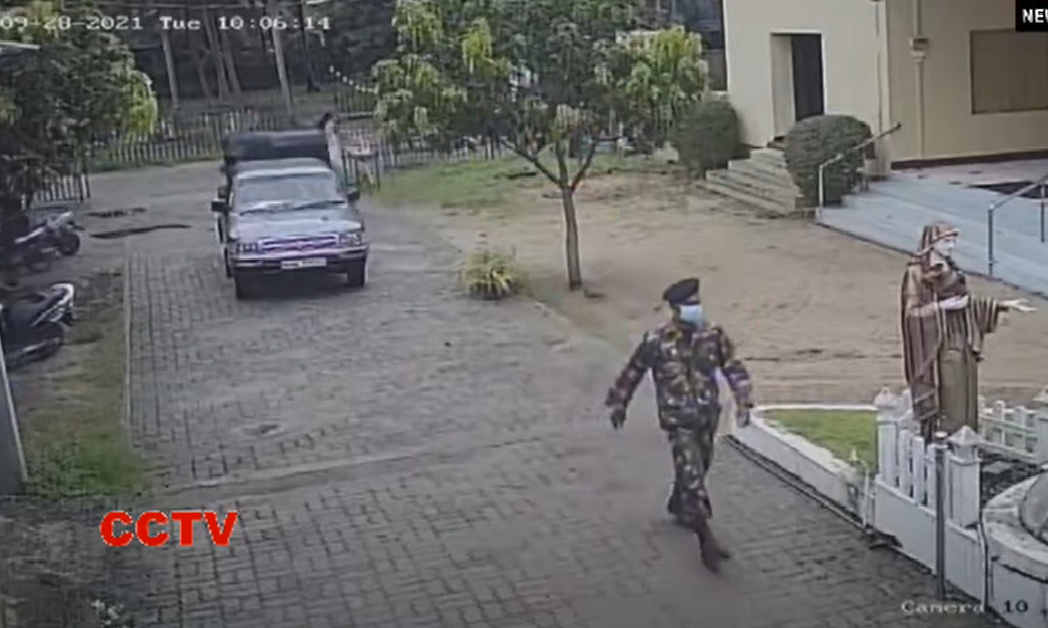 The Catholic church has called on the relevant authorities to conduct an investigation into the incident where a team of officers from the Welisara Naval Base Camp had visited and informed several Catholic churches on 28 September that there was a possibility of an attack on those churches on the same day.

However, he claimed that there are several issues with the incident since it was later announced that the said information had been given by mistake.

“The information was that someone who is dressed like a Catholic priest would carry out the attack. However, we have some questions, because when we looked into this matter subsequently, both the Navy and the Defence Ministry claimed that this was a mistake while also stating that this was part of a security plan,” Rev. Fernando said.

Speaking further, he emphasised that it should be ascertained from where and from whom the relevant information was received, and who had in turn instructed the navy officers to inform the churches about it.

He also said that the Government and the Defence Ministry should take steps to appoint an authorised official to inform Archbishop of Colombo His Eminence Malcolm Cardinal Ranjith and the Archbishop’s House of any such security threat to the Catholic community or the churches.

“When they provide information and later say that it was a mistake, how can we believe such information in the future? Also, the information given on 28 September was not given by a civilian. It was given by the Navy and we have to believe what they say. Therefore, we ask the Government not to make such mistakes.”

He further added that if information on such a serious matter is given and then it is said that it was done by mistake, a serious issue regarding national security would arise, and claimed that this information appears to have some truth as the navy officers had taken action to inform only a few churches about it.

“If there is a common danger of an attack, all that needs to be done is for the Defence Ministry or the intelligence agencies to officially inform the Archbishop that there is a danger. After that, security can be provided to churches by the Police or the Army if needed.”

Further claiming that the relevant navy officers may have given the information to these churches whilst acting on a high-level order, Rev. Fernando said that an investigation should be carried out to find out how the mistake had been made. “These officers may not have left on their own accord. They have to get an order from somewhere to go to these churches and inform. So find out what went wrong. This is not a joke and if this continues to happen, what we feel is that the Government is playing with the people’s lives.”

The Defence Ministry has however stated that news circulating on social media platforms and electronic media sources on a likely terror attack on Sri Lankan churches was based on information which had not been analysed or confirmed by the respective authorities. Further, Defence Secretary Gen. (Retd.) Kamal Gunaratne had added that there is no reason to panic over the incident.

Meanwhile, Rev. Fernando also lamented that the Police have not yet initiated an investigation into the recent statement made by Bodu Bala Sena (BBS) General Secretary Ven. Galagodaaththe Gnanasara Thera that a terror attack such as the Easter Sunday terror attacks of 21 April 2019 could take place at any time in the future.

During a recent television programme, the monk had claimed that he had information and evidence that a terrorist attack, such as the Easter Sunday bombings, could take place at any time. He had also stated that President Gotabaya Rajapaksa had been informed of the information such as the groups that could be involved in the attack and the whereabouts of such groups.

However, Rev.Fernando charged that the Government and the Inspector General of Police (IGP) have not yet taken steps to investigate the said statement and that they were acting as if nothing had happened. However, he said that the monk’s statement is something which affects national security, and therefore requested the IGP to investigate the matter and fulfil his responsibilities.

“Gnanasara Thera stated that there is a risk of an attack. He said that he knew all the details such as who would launch the attack and where the necessary weapons were hidden. Therefore, we request the IGP and the Government to conduct an investigation into this matter. The Archbishop informed the IGP in writing in this regard, but the IGP has not yet responded nor has he taken any steps to investigate it. It is against this backdrop that the Navy has provided information about a possible attack,” he added.