Sri Lanka: Campaign for Panama people’s to right to own land tomorrow 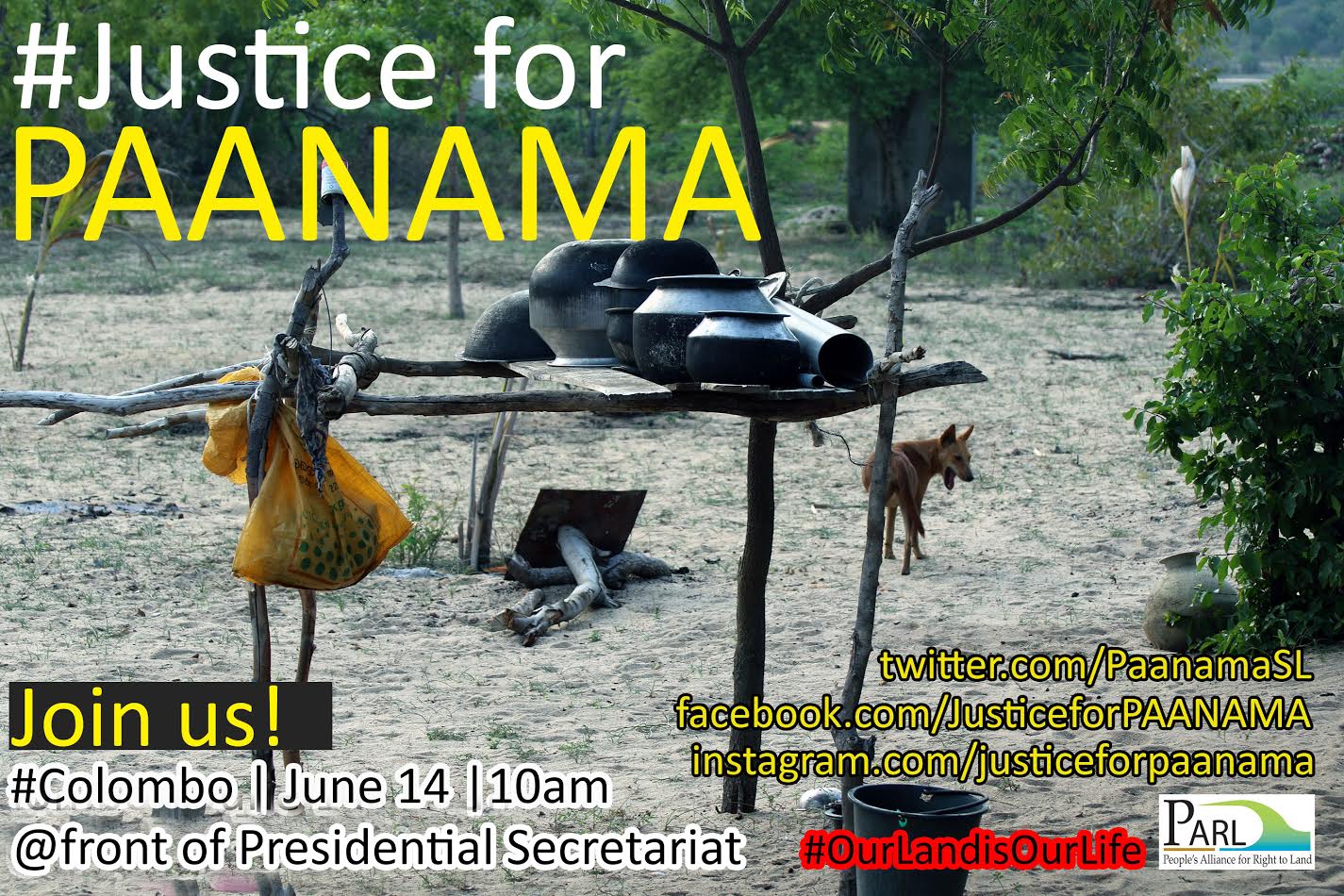 A public campaigning event organized by the Peoples Alliance for Right to Land (PARL) will take place tomorrow  to hand over a petition of 20,000 signatures calling for the release of lands in Paanama to their original owners.

The campaign action will take place in front of the Presidential Secretariat office tomorrow (June 14th) at 10 am with the participation of community members from Paanama, civil society representatives and activists from across the country.

Organises  call on concerned citizens to support them in creating a public discourse on this petition handover.

Press release issued by the PARL re the campaign follows:

Peoples’ Alliance for Rights to Land

We demand for #LandRightsNow – 20,000 signatures calling for justice to Paanama

The following is a statement issued by the Peoples’ Alliance for Right to Land (PARL). In continuation of the global campaign #LandRightsNow launched in calling for the release of Paanama lands back to its people, we plan to hand over a petition of over 20,000 local and international signatures to the Presidential Secretariat office on 14.06.2017 at 10.00 am.

In 2010, 350 families of farmers and fisher folk living in Paanama, a coastal village in the east of Sri Lanka, were forcibly and violently evicted from lands they had cultivated and lived on for over forty years. These lands were taken over by the military to establish camps, and they are now being used to promote tourism. PARL calls on the Government of Sri Lanka to immediately act on the decision to release these lands back to the community who depend on them for their livelihoods and food. Undeterred by threats, intimidation and legal action taken against them, the people of Paanama have worked together in unison in the struggle to win their lands back. Despite these dangers, the community refuses to give up. In 2015, the government finally agreed to return the land, recognising the community’s rights. But the government has yet to keep its promise.

The community is still waiting for their land and their home back. A gathering of Paanama community members, civil society representatives, journalists and activists will convene outside the Presidential Secretariat office tomorrow (June 14th) to hand over the aforementioned petition in demand of justice, calling for the release of Paanama lands. We invite all supporters, campaigners and media personnel to join us in this collective effort of handing over this petition of 20,000 signatures.

#LandRightsNow – The global call to action on indigenous and community land rights was launched as a joint effort of Oxfam International, International Land Coalition (ILC) and Rights and Resources Institute (RRI) in March 2016. This global effort supported a series of public campaigning spikes in 3 selected countries: Sri Lanka, Peru and Australia. The campaign in Sri Lanka was spearheaded by PARL and Oxfam in Sri Lanka.

The Peoples’ Alliance for Right to Land (PARL) is a voluntary coalition of civil society organizations and individuals, working together against land grabbing and for housing, land and property rights of poor and marginalized communities since 2011.

On behalf of the People’s Alliance for Right to Land, yours sincerely,