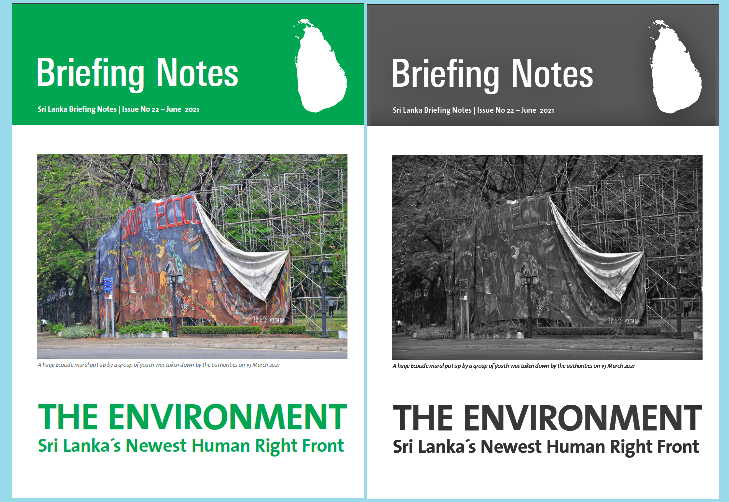 That the country has suffered much over the years owing to irresponsible management of the environment is a fact. Moreover, it is clear that the illegal deforestation, sand and gem mining, sea erosion etc. continues unabated simply because government officials are apathetic in applying the law of the land to the letter. At the same time, those officers who are committed to carrying out their duties are hampered because of undue political pressure.

Read the full report as a PDF:Sri Lanka Briefing Note 22 The Environment June 2021

In ordering forest conservation officers to drop charges against those violating the rules governing Nature Reserves, President Rajapaksa himself has undermined the authority of these officers. Apart from loss of morale amongst the officers, it also means that villagers and private companies will not be afraid to violate the law.

The country has seen at least on two occasions how Gampaha Division Wildlife Officer Devani Jayathillake has stood up against political bullies to protect the environment. Though her battles have become public, there are several others of her ilk too, who are battling pressure brought upon on by people with vested interests. However, it is unknown for how long she and her colleagues would have the strength to withstand the onslaught of attacks against them.

In yet another bid to silence the discussion on deforestation, the CID arrested an Assistant Land Settlement Officer in Kotmale. His crime? Posting reports on deforestation on his FaceBook account. The arrest took place mid-May and the Officer has since been granted bail.

The administration seems to have adopted a new form of suppressing its critics; when in power previously, those who challenged the government were abducted, assaulted or murdered, now the intimidation comes in the form of an arrest.

Threats and intimidations aimed at the environmental rights activists have increased in recent years.

In March 2021 Military intelligence officers questioned a well known rights activist, who has been the forefront of protecting the environment.

In mid 2020 leading environmentalist had to leave the country after police officers visited his sister’s house, where he was staying and questioned at length on his whereabouts.

Environment activists who campaigned for the protection of Sinharaja Forest Reserve were blamed as “environment terrorists” by state and pro state mass media.
Another leading environmentalist was threated with LKR 500 million lawsuit over a statement he made in relation to a son of the Prime Minister.
All of this, then points to the fact that all interested stakeholders must put on a stronger effort to arrest the environmental destruction currently taking place.
For long, governments and their media allies have been tarring the not-for-profit sector, accusing them of conspiring against the State.

Today, it is the environmentalist who is being sees as anti-State.