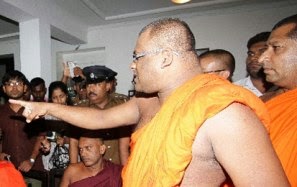 With a presidential election reportedly in the offing, the BBS seems to be shifting fully to the new mode. Halal and slaughter issues are forgotten. The saffron-thugs are demanding that political and religious correctness be equated with ethno-religious ghettoisation. If the opposition manages to field a presidential candidate who can unite the communities, the Rajapaksas will use the BBS to attack opposition meetings, while police looks on.

The BBS et al have another very useful purpose – terrify minority politicians into submission. The drubbing the SLMC received at the March PC polls is indicative of the minority mood. The Siblings would know that electoral-logic might compel even the most abject minority politicians to reconsider their options and allegiances. In that context venality may not suffice to keep Tamil/Muslim/Upcountry-Tamil politicians under Rajapaksa thumbs. The BBS, with its anarchic conduct, is filling the gaps with violence.
The BBS invasion of Rishard Bathiudeen’s ministry is an excellent case in point. A handful of monks invaded the ministry in the minister’s absence and were allowed a free run. The police which hammered innocent commuters in the Fort Railway Station, the previous day, did nothing to stop the saffron-lawbreakers. A senior cop is on record, assuring Mr. Bathiudeen that the monks will not be allowed into the ministry, so long as the minister is inside: “Sir, you are a cabinet minister. I have come to protect you as a cabinet minister. I will not allow anything to happen to you.” The unsaid message will not be lost on such an arch opportunist as Mr. Bathiudeen – he is protected by ‘law’ only so long as he remains a cabinet minister; if he leaves, he will be left vulnerable to the marauding monks. Since Mr. Bathiudeen is as concerned about Muslims as the Rajapaksas are about Sinhala-Buddhists, he will betray his constituents with alacrity in return for Rajapaksa protection. (Incidentally, Minister Bathiudeen’s current plight is partly self-inflicted; he took the law into his hands and attacked a judge, in 2012. Today he is a victim of the climate of lawlessness he helped to create).
Casino Bala Sena
The BBS et al are given the same free hand accorded to the likes of Mervyn Silva and Eraj Fernando, because they are primarily and mainly Rajapaksa pawns. They may occasionally criticise the ruling family but they will never act against familial interests – as is evident from their consistent refusal to take up the casino issue.
Two delegations consisting of several Sinhala-Buddhist organisations met the Malwatu Chief Prelate on Wednesday. The National Sangha Council delegation focused on the casino issue. The BBS/Ravana Balaya delegation ignored the casino issue and focused on the ‘threat to Buddhism from unbelievers’. At the conclusion, BBS head-honcho, Galagoda-Atte Gnanasara Thero said, “Fundamentalist cliques belonging to other religions are operating in Lanka…. Some priests of these non-Buddhist religions betrayed the country by sneaking to the US and Geneva…. We will become very agitated in a couple of days…..”
The regime is planning to ram through the Strategic Development Act, creating a wide backdoor to mega-casinos. This is an issue which reveals Rajapaksa hypocrisy. It is also an issue on which the Opposition is clearly in synch with the Sinhala-Buddhist majority and a majority of monks. The Rajapaksas therefore need to prevent an anti-casino agitation from getting off the ground, bringing representatives of all ethno-religious communities onto a single platform. What better way to do that than to unleash the BBS marauders screaming about Muslim, Tamil and Christian threats?
During times of extreme socio-economic distress, suffering multitudes turn to religion for solace, particularly when systemic forces fail to offer any hope. The other function of the BBS is to step into the breach, and blame Sinhala-Buddhist economic distress on ‘Tamil/Muslim/Christian exploitation’. This is why both the BBS and the Rajapaksas are trying to maintain the myth about an independent and uncontrollable BBS.
Like in the case of Lankan militarization, the Rajapaksa-Sangha nexus will not be a relationship of equals; the Sangha will be pawns rather than partners, Buddhism merely a weapon and a shield. The Rajapaksas, in the interests of their familial project, will do to Buddhism and the Sangha what they have already done to every other Lankan institution, from the Judiciary to the Central Bank.
It’ll be Buddhism devalued and debased.